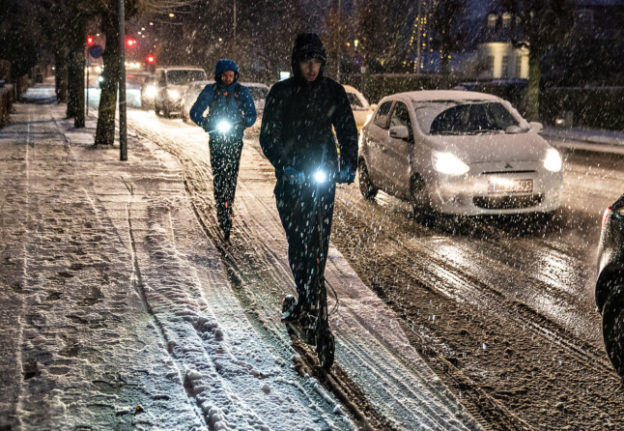 The new cases bring the total number of incidences of the variant in Denmark to at least four, with several more still under investigation.

All cases so far are connected to travel to South Africa, the country which first detected and raised the alarm over the variant last week.

A school in Odense which was closed due to a suspected case with the variant meanwhile said that Omicron had been found not to have been at play in the case in question.

Snowstorms in Zealand and Jutland

Much of the country is seeing heavy snow or sleet this morning, with weather following the warnings earlier issued by met office DMI of snowstorms in much of Jutland and northern parts of Zealand.

Temperatures are between freezing point and 2 degrees Celsius, so any snow that settles is likely to quickly melt.

The weather could cause traffic delays and motorists are advised to take the conditions into account.

The government will today publish an updated list of areas which are considered “udsatte” or underprivileged, including the list formerly known as the “ghetto list”. That term has now fortunately been scrapped in official references to the list.

In order to be included on the list, a housing area must meet a set number of criteria. The criteria relate to factors including the ethnic backgrounds of residents, employment status and income.

The list is relevant because neighbourhoods included on it on the list can be subjected to special treatment under the law, including harsher punishments for certain crimes, mandatory daycare for children, and housing reforms which can force people to move.

Long-term unemployment down but still higher than before pandemic

The number of people classed as langtidsledige or long-term unemployed has declined in recent months but is still some way of reaching pre-Covid levels, according to official figures reported by news wire Ritzau.

To fall into the category, a person must have been out of work for 80 percent of the last 12 months.

Copenhagen Pride begins this weekend with events across the city, from film screenings and concerts to historical walking tours and good-old-fashioned parties — here’s the full schedule of events.

You’ll have to wait until next weekend for the iconic Copenhagen pride parade.

Representatives for 26 countries convened in Copenhagen for a fundraiser for Ukraine, ultimately committing to more than 10.8 billion kroner (that’s over $1.5 billion) to support training and equipment this year and the next.

France, Germany and the United States have yet to announce how much they contributed to the impressive total, but Denmark and the UK, the two countries behind the fundraiser, have revealed their supplemental donations were $114 million and almost $300 million, respectively.

“Our partners know that we need funding and they articulated readiness to support us financially,” Ukrainian Defence Minister Oleksii Reznikov said, according to the Agence France-Presse
“That is a marathon and for a marathon you need energy and frankly
speaking, the main energy in this case is money.”

We’re in for a steamy weekend, according to the Danish Meteorological Association.

Forecasts predict cloudless skies Saturday and Sunday with temperatures between 25 and 30 degrees — perhaps as high as 32 on Saturday.

If you decide to break out the grill, though, be mindful — Danish Emergency Services says the warm weather and recent lack of rain mean an elevated risk for fires this weekend.

Football players and fan club leaders have been invited to meet with Danish minister of justice Mattias Tesfaye after yet another week of unrest surrounding matches, TV2 Lorry reports.

Tesfaye says he’s willing to do what’s necessary to make the stadium environment safe for the 99 percent of fans who come for “football and partying.” Possible measures include making penalties harsher for crimes connected with games (again) and increasing police presence.

This follows several weeks of dust-ups between rival fans, fans and stadium staff, and fans and police that sent several to hospital and involved considerable destruction at various stadiums.