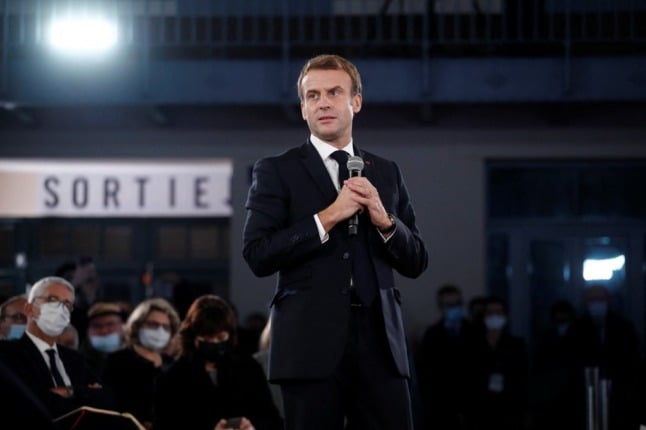 Emmanuel Macron has avoided for now another lockdown, but will it help him at the polls? Photo: Benoit Tessier/AFP

The Zemmour virus is receding, for now. Another nasty virus is regaining ground.

Both developments – the puncturing of the racist pundit Eric Zemmour’s popularity and the arrival of a fifth wave of Covid-19 – have big implications for the presidential election in April.

Both could damage President Emmanuel Macron. Both could yet help him.

The resurgence of Covid-19 in France was expected. Acute cases remain, so far, within manageable bounds but new infections – now approaching an average of 20,000 a day – have almost doubled in the past week.

President Macron and his government have ruled out for now the kind of new social restrictions which have provoked serious unrest (much of it fomented by the far right) in Belgium and the Netherlands in recent days.

The most significant announcement by the health minister, Olivier Véran yesterday was that third or booster vaccinations would be available to all adults from Saturday, five months after their second injection – not six months later as now.

He set off an avalanche of third dose bookings, 1.2m in 12 hours. Good.

And here’s the vaccination booking site just moments after the minister’s announcement pic.twitter.com/PbXrY885gD

There are also “covid riots” in France but they are 6,750 kilometres away from Paris in Guadeloupe and Martinique, the French départements in the Caribbean.

The violent protests there are nominally about the firing of health workers who refuse to be vaccinated. They are driven, in fact, as much by the island’s unhealthy love-hate, dependence-rejection relationship with metropolitan France as by simplistic arguments about state control and personal liberty.

Both sets of riots are a warning, all the same, that 20 months and five waves of Covid-19 have generated a dangerous pandemic fatigue. The exception, it seems, is Britain where many (not all) people appear complacent about one of the worst Covid records of any large democracy.

Parts of the British media – even parts of the BBC – are revelling in the new Covid surge in Europe. They ignore the fact that this is the continuation of the “Delta variant” wave which started in Britain in the summer and produced inflated levels of British cases and deaths while most of Europe was spared.

Psycho-analysing Britain at present is a thankless task. Let us return to France.

President Macron had hoped by now to be talking – as he did in his TV address earlier this month – about the booming French economy and his reform plans for a second mandate. Instead, he is once again forced to make a difficult choice. Should he take draconian action – curfews, lockdowns – to flatten the new wave in its infancy? Or should he allow France to ride the new Covid wave in relative social freedom in the hope that the country’s high level of vaccination will prevent hospitals from being overwhelmed by Christmas?

Since the pandemic began in France in March 2020, Macron has alternated between taking decisive early action and hesitating – and then having his hand forced by events. I recall giving him only 5 out of ten for his management of the first 12 months of the pandemic.

I think he has done much better since then. The health pass, announced on July 12th, was a master-stroke. Without it, France would not now have such high levels of vaccination (90 percent of adults, 76 percent of the total population) and would now be facing harsh, new, social restrictions.

The announcements by the health minister, Oliver Veran, on Thursday fall into the wait-and-hope rather than decisive-and-early category. The wearing of masks in indoor public will return. Booster doses will become a new condition of the health pass from January 15th.

Is all of this enough? Who knows? No one can say for certain what has produced this fifth wave of a pandemic which had – once again – appeared to be under control. Various plausible explanations are given: cold weather forcing people indoors; slackening respect for distancing measures; fading vaccine effectiveness; the tenacity and virulence of the nasty Delta variant.

Almost two years into the pandemic, the epidemiological experts are still struggling to know how the virus works.

All of the epidemiological experts, that is, except Marine Le Pen and Eric Zemmour. Both have made statements this week suggesting that health passes, social restrictions, even vaccines are wrong-headed, overrated and quite possibly useless.

They – and other candidates – hope to gain electoral advantage from either Covid fatigue or Covid calamity in the next couple of months.

Depending on the outcome, they will claim: a) Macron didn’t do enough;  b) Macron did too much.

Macron’s electoral hopes do not entirely stand or fall on Covid but they will be heavily influenced by it. If France can avoid a new lockdown or even new curfews, Macron’s handling of the pandemic will have been vindicated. He should then win easily.

If there is a new lockdown, all bets are off.

The shrinking of the “Zemmour virus” is a similarly double-edged sword for the President.

If Zemmour deflates completely (unlikely) Marine Le Pen will be Macron’s opponent in the two candidate second round on April 24th and Macron will defeat her. If Zemmour deflates only a little, both he and Le Pen could be edged out of the run-off.

Macron would then face whichever centre-right candidate emerges from the Les Républicains primary next week. That, as I have long argued, would be a much tougher battle for Macron.

France is known for having some of the strictest laws regarding marijuana consumption in Europe – while simultaneously maintaining one of the highest rates of cannabis usage in the EU.

A group of French senators – coming from the Socialist, Green and centre-right Les Républicains parties – are trying to change those laws, and have come together to call for marijuana to be legalised in France.

The group of 31 co-signed a statement published in French newspaper, Le Monde, on Wednesday, August 10th.

In the statement, the senators promised to launch a ‘consultation process’ to submit a bill to legalise marijuana “in the coming months.”

The proposition was headed by Senator Gilbert-Luc Devinaz, a member of the Socialist Party, and gained support from the party’s leader, Patrick Kanner.

A report by the Assemblé Nationale, which was published in May 2021, estimated that nearly 18 million French people (more than 25 percent of the population) had already consumed marijuana, and that an additional 1.5 million consume it regularly.

This, coupled with the 2019 finding that nearly one in two French people (45 percent) said they were in favour of legalisation, according to a survey by the French Observatory of Drugs and Drug Addiction (OFDT), helped strengthen the senators’ position.

“Public opinion is ready, the legislature must act,” they wrote.

Their senators argue that legalising marijuana in France will allow the authorities to better protect French citizens, saying that legalising would not require “minimising the health impacts of cannabis consumption” but rather would allow regulation similar to “public policies for tobacco, alcohol or gambling.”

For the group of 31 senators, the benefits of legalisation would involve a better control over the “health quality of products consumed,” “curbing trafficking in disadvantaged areas,” developing large-scale prevention plans,” and finally the taxation of cannabis products and redirection of law enforcement resources. Decriminalisation – in their opinion – would not be sufficient as this would simply “deprive authorities the ability to act,” in contrast to legalisation.

“In the long term, new tax revenues would be generated from the cannabis trade and from savings in the justice and police sectors”, which would make it possible to mobilize “significant resources for prevention as well as for rehabilitation and economic development,” wrote the senators.

In France, the conversation around cannabis has evolved in recent years – former Health Minister (and current government spokesman) Olivier Véran said to France Bleu in September 2021 that “countries that have gone towards legalisation have results better than those of France in the last ten years,” adding that he was interested in the potential therapeutic use of cannabis.

Currently, the drug is illegal in France. Previously, it fell under a 1970-law of illicit drug use, making it punishable with up to a year prison and an up to €3,750 fine.

However, in 2020, the government softened the penalties, making it possible for those caught consuming it to opt for an on-the-spot fine of €200.

There is also an ongoing trial involving 3,000 patients to test the impacts of medical marijuana usage, particularly with regard to pain relief.