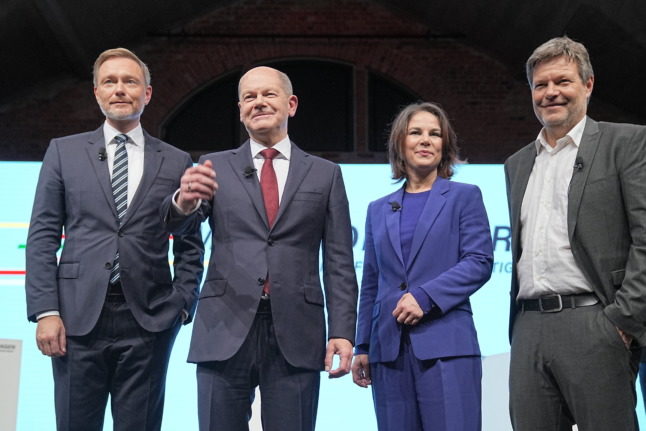 On Wednesday, the ‘traffic light’ coalition – named after the parties’ respective colours – unveiled their 177-page coalition pact, which included pledges to raise the minimum wage, maintain the debt brake, legalise cannabis and exit the coal industry by 2030.

Having managed to successfully combine policies from the centre-left Social Democrats, ecologically focused Greens and pro-business FDP to produce a set of policies in record time, it may seem like the traffic light is well on its way to forming a government. But there are still hurdles for all of the parties to clear before SPD chancellor candidate Olaf Scholz can take his place in the Kanzleramt and relieve Merkel of her 16-year tenure.

Here’s what’s set to happen over the coming weeks as Germany sets about forming its new government.

Having negotiated hard to get their flagship policies in the coalition agreement, the SPD, Greens and FDP will now have to go back to their parties to vote on what’s been agreed.

For the SPD and FDP, the votes will take place at party conferences that are due to be held on the weekend of December 4th/5th.

The Greens have taken a slightly different route: starting on Thursday, the party will hold a digital vote in which party members will decide whether the Greens should enter government with the coalition agreement that was announced on Wednesday.

According to German media sources, the Green Party members’ vote will be held online over ten days, and is due to conclude around the same time that the SPD and FDP will be holding their party conferences. If all goes according to plan, the parties should have the final green light for the coalition pact by the end of Sunday, December 5th.

So far, a handful of key government positions have been earmarked by candidates, among them the SPD’s Olaf Scholz as Chancellor and key FDP figures heading up the four ministries that the liberals will take control of.

On the SPD side, Hubertus Heil looks set to keep his current job as Minister for Labour and Social Affairs in order to implement key policies such as the €12 minimum wage and the scrapping of Hartz IV. Hubertus Heil (left) will remain in place at Minister for Labour and Social Affairs. Other key cabinet positions have not yet been filled. Photo: picture alliance/dpa | Philipp Schulze

The Green’s co-leaders Annalena Baerbock and Robert Habeck are also eyeing important jobs in the next government, though these won’t be confirmed until the party members have voted on both the coalition agreement and proposed ministerial roles.

With the party’s agreement, however, it looks likely that Baerbock will become Germany’s first female Foreign Minister, while Robert Habeck will head up a ‘super ministry’ that will bring together the economy, energy and climate protection portfolios under one roof.

For their other three ministries – Family, Environment and Agriculture – it remains unclear who’ll be in the driving seat, though Green Party parliamentary leaders Anton Hofreiter and Katrin Göring-Eckert are likely picks.

If everything goes smoothly in the parties’ internal votes, Scholz will be elected Chancellor in the week starting December 6th.

On the day of the Chancellor’s election, the cabinet will be appointed by President Frank-Walter Steinmeier and sworn in at the Bundestag – Germany’s lower parliamentary house.

On the same day, Angela Merkel is expected to hand over the reins of the Chancellor’s Office to Scholz after 16 years in the job. Other ministries are expected to conduct their handovers the following day. Finance Minister Olaf Scholz presents Angela Merkel with flowers at her last cabinet meeting as Chancellor of Germany. Merkel is expected to hand over to Scholz the same day he is voted in as  the new Chancellor. Photo: picture alliance/dpa/AP POOL | Markus Schreiber

Since the parties are expected to vote through the coalition pact on or by December 5th, we’re highly unlikely to see the new government in place before the 6th.

However, with the G7 summit set to take place in Liverpool from December 10th and a crucial federal and state roundtable on Covid scheduled for the 9th, Scholz and his coalition partners won’t want to waste any time before getting down to work.

One possible timeline is the Chancellor vote and handover will happen on Monday, December 6th, while the other ministers will take up their positions the following day.

That will give whoever takes up the role of Health Minister a cool 48 hours to get to grips with the brief before meeting with state leaders to set a course for navigating Covid through the rest of winter.