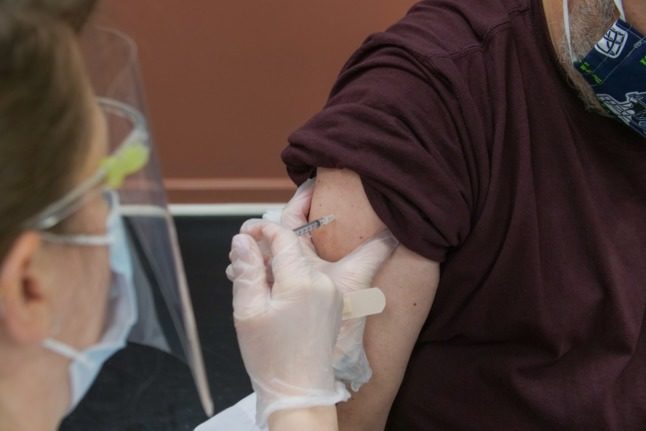 Could Covid vaccines become compulsory in Switzerland to curb the number of infections? Photo by Steven Cornfield on Unsplash

The epidemiological situation in Switzerland is getting worse, with the number of cases reported daily now exceeding 8,000 — about 2,000 more than in the previous week.

And while the number of Covid-related admissions to intensive care units was relatively low up until the middle of November, it has now grown from 154 patients reported on Monday to 172 on Thursday.

The situation is expected to deteriorate further, with several Swiss experts warning that the country is on course to reach Covid infection rates similar to those of neighbouring Austria — where a lockdown is currently underway — in three weeks’ time.

The Covid-19 Task Force said the number of people in hospital with Covid was increasing by 40 percent each week and will reach Austria-style capacities in mid-December, with surgeries cancelled and hospitals needing to make triage decisions about who to treat in intensive care.

Yet, despite the situation that experts describe as critical, Swiss Health Minister Alain Berset announced on Wednesday that the situation in the hospitals is “not out of control”, saying further measures should be imposed at a cantonal rather than a federal level.

Why is the government not implementing any measures despite a surge in infections?

Apart from the fact that Switzerland has been slower than its neighbours in introducing various restrictions, there is a general belief among political observers that this is a strategic decision on the part of the Federal Council, which wants to wait until after the referendum on November 28th to introduce tougher rules.

That’s because one of the issues at stake in the referendum is an amendment to the existing Covid-19 legislation, which focuses specifically on the Covid certificate.

If opponents of the certificate prevail at the polls, the requirements relating to and involving the certificate would be nullified — a situation that the Federal Council wants to avoid at all costs.

Does this mean the Federal Council will impose new national measures after the vote?

Given the government’s history of dawdling throughout the pandemic, nothing is certain.

However, if the voters decide to maintain the Covid certificate (and polls indicate that they will), the Federal Council could introduce some tighter rules, especially if the number of coronavirus-related ICU admissions continues to rise.

It is doubtful the government will declare a nationwide lockdown, as is the case in Austria, because so far at least, the outbreaks are regional, concentrated mostly in the eastern and central part of Switzerland. What restrictions are likely to be implemented nationally?

Five strategies are currently under discussion, according to Switzerland’s Watson news platform:

This option has already been discussed in Switzerland.

For the head of the Task Force Tanja Stadler, as well as a number of cantonal health directors, this strategy is an “alternative to closures”.

But acceptance of the 2G is not unanimous among experts.

Epidemiologist Christian Althaus, for instance, doesn’t see it as a viable option.

“I doubt that a 2G regulation brings much. Instead, I would continue to offer PCR tests for free, but I would reduce their validity to 48 or even 24 hours”, he tweeted.

This strategy has already proven its effectiveness in reducing the number of infections in March 2020.

So far, however, it doesn’t appear to be a viable option for Switzerland.

The six-week closure of non-essential businesses and schools had significant financial and social consequences and health authorities made it known that another confinement would only be introduced as a last resort, after having explored all other options.

“I really hope that we will be able to get the situation under control in other ways”, said bioethicist Samia Hurst-Majno.

Could Switzerland follow Austria’s lead and introduce a nationwide Covid vaccine mandate, especially as the country’s vaccination rate is stagnating?

Berset has repeatedly stated that vaccinations will remain voluntary and the country has followed the strategy of encouraging rather that mandating inoculations.

However, there are some indications that this drastic measure may not be completely off the table, at least in regards to certain groups of people.

According to the law on epidemics, the Federal Council can introduce a vaccination obligation for “certain groups of people”, for example nursing staff or teachers, who are particularly exposed by their profession. The cantons could also enact an obligation in the event of a particular danger, for example if the health system is threatened.

“Temporary compulsory vaccination of healthcare workers certainly makes sense for the protection of patients and undoubtedly deserves to be examined”, Althaus said.

While general vaccine mandate seems highly unlikely right now, as the government wants to avoid coercion as much as possible, compulsory immunisation for certain groups of people remains (a distant) option.

With the Covid certificate required in all indoor venues, the government could decide to strengthen the measures already in place.

This could imply new rules on working at home, revised mask obligations,  or a limitation of the number of people during demonstrations.

“There may again be restrictions on gatherings or the number of people inside. Nothing is excluded ”, according to Zug cantonal doctor Rudolf Hauri.

The Federal Office of Public Health (FOPH) announced on Tuesday that second Covid booster shots for general population will be available in the fall, “when the risk for individuals and the burden on the healthcare system will be greatest”.

While Switzerland had a widespread booster shot campaign against Covid, the government has been reluctant to approve second boosters other than for those in vulnerable categories.

Right now, those with a weakened immune system and people over the age of 80 are the only ones eligible.

People not in those risk groups who want a second booster will need to pay out of pocket for the jab.

This may be people who feel they are in a risk group but are not included in the government’s list, or those who need a booster for travelling abroad.

People who are travelling to countries where proof of up-to-date immunisation is required but whose Covid certificates are no longer valid, can receive the fourth dose but upon request have to pay for the shot.

Previously, all Covid boosters have been free for Swiss citizens and residents, with the government electing to cover the costs.

How much will a Covid booster for travel cost?

While the federal government previously covered the costs of the vaccines, it is now up to individual vaccination centres to set a price for a second booster.

A spokesperson from the FOPH told The Local on Wednesday that the cost tends to be around CHF60 across much of the country.

Please keep in mind that this cost only relates to second booster shots for those not in vulnerable categories. For those wanting their first booster – or indeed their first or second shot of the vaccine – the government will continue to cover the costs.