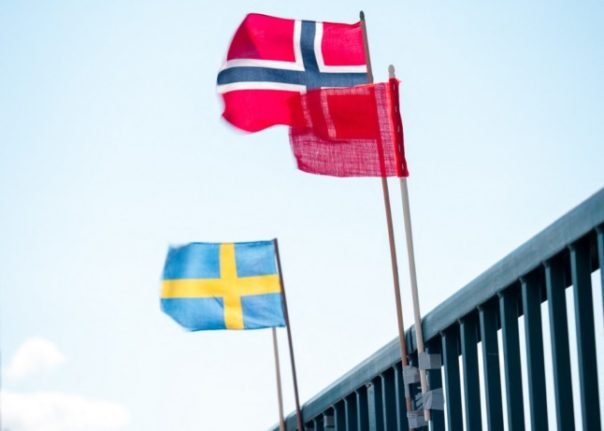 Read about a drop in cross-border shopping and a record number of Covid-19 related deaths last week. Pictured is A Swedish flag on the Swedish side of the border and a Norwegian one on the Norwegian side. Photo by Petter Bernsten / AFP

Last week, 45 Covid-19 related deaths were registered in Norway, according to the Norwegian Institute of Public Health’s (NIPH) latest weekly report. This is the highest number of recorded deaths in 2021.

“The number of deaths in week 46 is the highest registered in 2021 and at almost the same level as during the beginning of the pandemic,” the NIPH wrote in its report.

The median age of those who died was 85 years old. In total, 146 new patients were admitted to hospitals with the virus.

New president of the Storting announced

Masud Gharahkhani will be the new president of Norway’s parliament after the Labour Party put him forward for the role.

Vice president Sverre Myril was due to take over but was ousted. Eva Kristin Hansen, the previous president, stepped down last week due to the commuter housing scandal, which has engulfed Norwegian politics since September.

Since the end of the summer, it has been revealed that several MPs had taken advantage of commuter housing allowances by having the state pay for their housing, despite already having access to their own private accommodation.

“There are sad circumstances surrounding this election of a new Storting president. The work of the Storting should be about solving people’s everyday challenges, not about clutter or chaos in the representatives’ schemes,” Gharahkhani told the press in parliament yesterday.

Gharahkhani will become the first president of the Storting born in a country other than Norway, having moved to Norway from Iran in 1987.

Between July and September this year, Norwegians spent 1.3 billion kroner during cross-border shopping trips, according to Statistics Norway.

This is well below the record third quarter recorded in 2019 when Norwegians spent five billion kroner on shopping trips abroad.

READ ALSO: Is the return of cross-border shopping in Norway really a good thing

“Despite the fact that cross-border trade picked up sharply in the third quarter compared with the previous quarter, there is still a long way to go until it is at the same level as before the pandemic,” Boyd Oyier, chief consultant at Statistics Norway, said in the report.

However, the high number of cases registered on Wednesday was due to delays which meant too few were recorded on Tuesday when 1,520 infections were announced.

The reason for too few cases being registered was that the Norwegian Health Network had operation problems.

Over the last seven days, an average of 2,297 Covid infections have been registered each day.

Read about the interval between doses two and three being shortened and the death of Kåre Willoch in today's roundup of important news. Pictured is Holmenkollen in Oslo. Photo by Michael Ankes on Unsplash

“He was a very gracious and nice person who was concerned with people and political issues,” Solberg said.

The former PM pointed to Willoch’s modernisation reform in Norway as his most significant political legacy.

“The most important thing he did was the modernisation of Norway,” she said.

New coronavirus measures are on their way in Norway, with the health minister, Ingvild Kjerkol, set to decide on new restrictions following a rise in infections, outbreaks of the Omicron variant and parts of the health service nearing capacity.

“There will be measures we will notice in our everyday lives,” Kjerkol said to public broadcaster NRK.

“The situation is demanding, and that is the reason why we are now looking at new measures. We have a health service that is in full swing, and our goal is to have control of the pandemic, in the form that the municipalities and hospitals are able to provide proper health care,” Kjerkol explained.

READ ALSO: How could Norway’s Covid-19 restrictions be tightened this week?

The minister didn’t reveal any details on what could be announced but said that decisions would be made on Tuesday.

The interval between vaccine doses two and three for those aged between 64 and 45 will be shortened by a month, Norway’s health ministry has announced.

The interval will now be five months when it was previously six. All adults with serious underlying conditions and those working in the health and care sectors will also have the interval cut.

One in three think Covid-19 measures are too relaxed

A third of Norwegians feel that the current Covid measures in place in Norway are insufficient and need tightening, according to a survey conducted by Norstat for public broadcaster NRK.

As of yesterday, 295 people were hospitalised with Covid-19.