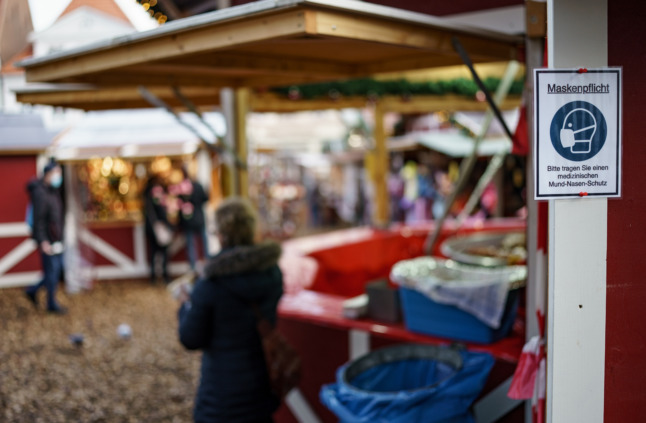 A sign at a Christmas market in Flensburg, Schleswig-Holstein, indicates that visitors should wear masks at all times. Photo: picture alliance/dpa | Axel Heimken

The coalition agreement presented by Chancellor-in-waiting Olaf Scholz and his team of Greens and Free Democrats only contains a short section dedicated to pandemic measures.

The parties promise to “reorganize the government’s crisis management” by “immediately creating a joint crisis team to better coordinate the nationwide fight against the pandemic.”

The crisis team is set to be made up of representatives of the federal and state governments. Due to Germany’s federal system, pandemic restrictions are enacted at the state level. This has led to a patchwork system of different rules in different regions.

By creating a team in the Chancellery that is made up of representatives of the states, the new government will hope to streamline the often arduous process of coordinating between all 16 states.

Furthermore, the parties plan to set up an “interdisciplinary scientific council” that will be set up within the Health Ministry.

While the coalition document was pretty thin on detail about the pandemic, Scholz gave some more detail at a press conference on Wednesday afternoon.

He said that the parties had agreed to a €1 billion fund that would be used to pay out further bonuses to nurses and care workers who’ve been on the front line of the health crisis.

He also confirmed that the parties would bring in compulsory vaccines in jobs where people have close contact with vulnerable groups.

The parties have left the door open to a broader vaccine mandate. “An expansion of this provision remains under consideration,” Scholz said.

The SPD politician also said that the next government wants to pick up the pace on vaccinations by investing in greater capacity for vaccine centres and also allowing vaccinations in pharmacies.

The initial signals are that the new government will be more reluctant to impose tough restrictions like curfews and school closures to try and slow the spread of the virus.

According to report in Bild newspaper this week, the traffic light parties quashed a plan by Angela Merkel to impose a two-week nationwide lockdown.

Meanwhile, the woman expected to be the next Education Minister, Bettina Stark-Watzinger, made clear that she would not allow for further school closures this winter.

This approach has met with some criticism.

The Süddeustche Zeitung complained on Thursday that the next government was not showing the necessary strength, complaining that “there is no sign of a desire to fight the pandemic, certainly not a desire to fight it with energy.”

Who will be health minister?

Also confirmed on Wednesday was that the SPD will take over the Health Ministry, which has become one of the most important jobs in government over the past 20 months.

There has been some speculation as to whether the post would go to Karl Lauterbach, an SPD politician who has become an influential voice in the public debate.

Lauterbach is popular among some Germans over his advocacy of tough lockdowns and vaccine mandates. After Wednesday’s coalition agreement announcement, the hashtag #WirwollenKarl (We want Karl) was trending on Twitter as users rushed to express their preference  acting Health Minister Jens Spahn’s successor.

But Lauterbach is also a polarizing figure and, according to rumour, is not favoured by Scholz.

Scholz refused to be drawn on who would get the role of Health Minister on Wednesday, saying only that a “good solution” would be found.