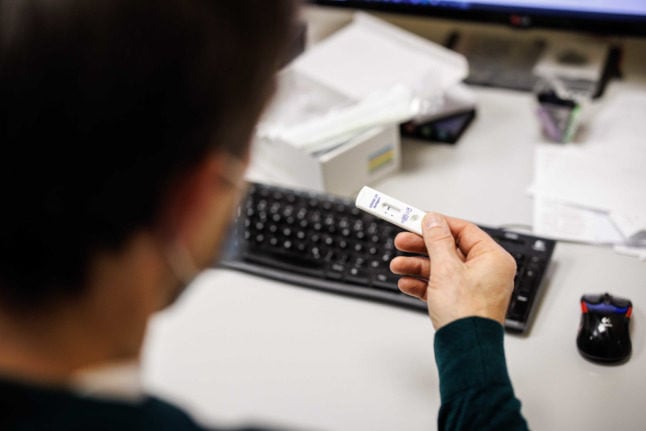 As part of its new package of measures to tackle Germany’s ever-rising Covid infection rates, ‘3G’ rules will come in at offices, factories and other working environments over the coming days.

Vaccinated people will of course be asked to show their vaccine certificate instead, while people who are recovered can show a positive PCR test taken at least 28 days ago, but no more than six months ago.

The new changes are expected to come into force on Wednesday. Here are five key things to know about the rules before heading off to the office later this week.

According to advice issued by the Federal Ministry of Health, a negative test only counts for the 3G rule if it’s taken under supervision. That means that employees can use their regular tests at work or head to one of the rapid testing stations before work in order to get their test for the day, but they can’t rely on a stock of cheap home testing kits to get by.

Instead, you’ll likely have to make your own arrangements for seeking out an official test and ensuring it’s still valid at the start of your working hours.

“Employees are obliged to take care of the test themselves,” Michael Witteler, partner at Pusch Wahlig Workplace Law (PWWL), told Handelsblatt. That means that the regular tests could become relatively time intensive if people are heading into the workplace several times a week.

Unfortunately, the time taken to go and get a test doesn’t count as part of your working hours – though employers may decide to grant employees a bit of additional time to do this at their discretion.

However, they don’t have a legal obligation to remunerate employees for the time spent taking the test, so it’s likely that unvaccinated employees will have to get used to slightly earlier mornings or getting tested in the evenings over the coming weeks.

2. You can avoid 3G by working from home

For a large number of employees in Germany, there’s a fairly easy way out of mandatory testing or having to present proof of vaccination and recovery: staying at home and avoiding the workplace entirely.

In fact, according to the amended Infection Protection Act that was approved in the Bundesrat on Friday, employers must offer office workers the chance to work from home if there are no operational reasons against it. That means that many office jobs are likely to implement more flexible working arrangements, though in some sectors like manufacturing work, medicine or construction, working off-site may not be possible. A man works from his dining table at home. People who don’t want to comply with 3G will be asked to work from home where possible. Photo: picture alliance/dpa | Finn Winkler

“In the current situation, employees are obligated to accept the offer to work from home,” Witteler told Handelsblatt. However, if employees feel that their home environment can’t be used as a home office – for example because of limited space or access to internet – they can legally turn down the offer. It all depends on how well you can make the case for the need to work on-site, though if you’re unable to carry out your work either at home or on site, there could be severe consequences.

3. People who reject 3G could lose out on wages

While many people may be able to get out of daily tests by simply staying at home, there are likely to be issues for those who are unable to and who still refuse to take the test.

If an employee comes into work and refuses to comply with the 3G rule, the employer must send them home, Tillmann Hecht, specialist lawyer and partner at Noerr in Frankfurt told Handelsblatt.

If they then can’t work from home, there will be no entitlement to wages and salary, as the employees can’t carry out their duties due to the new regulation in the Infection Protection Act. “And then the principle applies: no work, no pay,” says Hecht.

As a worst-case scenario, employers may even be entitled to terminate a worker’s contract if they refuse to comply with the latest Covid measures.

In guidance issued by the Ministry of Labour, ministers state that employees who cannot or do not want to provide proof of 3G should “in principle fear consequences under the law of dismissal”. However, the principle of proportionality must be observed, and employers should bear in mind that the 3G regulations are set to expire on March 19th, 2022, when making a decision.

4. Employers are only allowed to store some of your data

The introduction of 3G in the workplace takes employers into tricky legal territory, since generally they’re not allowed to specifically ask about, or store data on, their employees’ vaccination status. The only exceptions to this at the moment are at nurseries or care homes, where employers are legally entitled to enquire about whether employees are vaccinated.

Instead, employers will be able to ask for one of the three forms of proof required under 3G (proof of vaccination, recovery or a test) and then record the fact that proof was available on any given day. However, due to the principle of data minimisation, they should never record which one was shown, as this would allow people with access to the data to gain information on an employee’s medical history. Of course, it seems relatively unavoidable that employers will deduce that any workers who choose to show a test have not yet been vaccinated. According to Thomas Ubber, partner at Allen & Overy in Frankfurt, this could lead to discrimination against unvaccinated employees such as decisions to separate them from other staff or restrict their contact with customers.

“Though the data collected may only be used for access control, cases of abuse cannot be completely ruled out,” Ubber told Handelsblatt.

Data protection experts have criticised the lack of clarity in the new rules, as well as the lack of time employers have been given to implement them.

“The guidelines could have been clearer,” Stefan Brink, data protection commissioner of Baden-Württemberg, told DPA. Among other issues, it is unclear whether random spot checks or daily checks will be carried out, and whether employers are expected to ask for identification alongside proof of vaccination, recovery or the negative test.

5. At least three tests a week should be free

For those worried about the financial consequences of getting daily tests, it’s important to note that nobody should have to bear the cost of a full five tests a week. In a recent U-turn on the decision to scrap free rapid tests, the government has now decided that everyone should be entitled to at least one free test a week.

In addition, all employers are expected to offer at least two weekly Covid tests to employees who are expected to work on-site. The costs of these tests should be borne by the company, and not the employees.

That means that for most people, at least three free tests should be available each week. If the option is available to them, unvaccinated people could come to an agreement with their employers to work from home for the other two days, or simply pay for the additional tests themselves.

Of course, some employers may try to make things simpler by offering daily free rapid tests, so it’s worth checking what your company’s policy will be once the new rules come in.