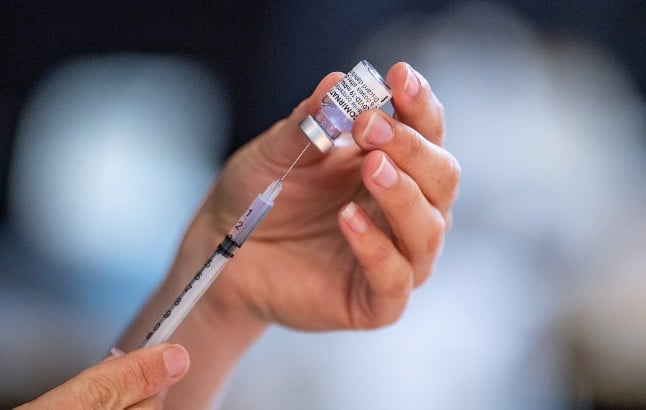 A nurse preparing a dose of vaccine for injection. Photo: Johan Nilsson/TT

According to the Dagens Nyheter newspaper, the Public Health Agency will next week publish a timetable, detailing when different categories of adult can expect their third dose of Covid-19 vaccine, with the first new groups under the age of 65 likely to get their booster dose before Christmas.

Sweden’s state epidemiologist told the newspaper that his agency had held detailed discussions on Thursday with Sweden’s regional health authorities over which age groups, professionals, and vulnerable people should be prioritised.

“We need to reach the same capacity which we had at the end of the spring, which is why we are carrying out an intensive dialogue with the regional health authorities,” he told the newspaper.

I truly hope so,” he said when asked whether those in priority groups currently not being offered third doses might get their booster dose before Christmas. “It very much comes down to what capacity there is.”

So far, third doses have been offered to everyone over the age of 65, home care visitors, and those living in care homes and supported housing, but some people over the age of 65 are currently finding it difficult to book appointments.

There have been growing calls from regional health authorities for third doses to be given the healthcare personnel.

According to the Sydsvenskan newspaper, the health authority in Skåne has decided to start giving left-over vaccine doses as booster shots to healthcare personnel if those in the prioritised groups cannot be called in at short notice.

“According to our information, around four percent of doses end up being wasted, but that varies from place to place. Even if that seems a small number, it should still be jabbed into someone’s arm,” said Gilbert Tribo, a regional councillor with the Liberal party.

Despite recently removing almost all Covid-19-related restrictions, the pandemic is still ongoing in Sweden, with the Public Health Agency describing the spread of infection in a press release as “intensive”.

There has also been an increase in the number of cases in groups of the population with an increased risk for serious illness, such as care home residents.

In addition to this, the immune system’s ability to react to vaccinations and build up long-term protection against the virus becomes less effective with age.

In response to this, the Public Health Agency is now recommending that Swedish regions offer a second booster dose – representing a fourth dose of the Covid-19 vaccine – to the following at-risk groups:

Regions will be able to offer the dose four months after the first booster dose (dose three), at the earliest, starting from next week.

“A booster dose strengthens protection against the virus,” said state epidemiologist Anders Tegnell in a statement. “Therefore, we believe that people aged 80 and over will benefit from a second booster dose.”

First booster doses are available for over-18s in all Swedish regions. If you have not had yours yet and want to know how to book in your region, see The Local’s guide HERE.