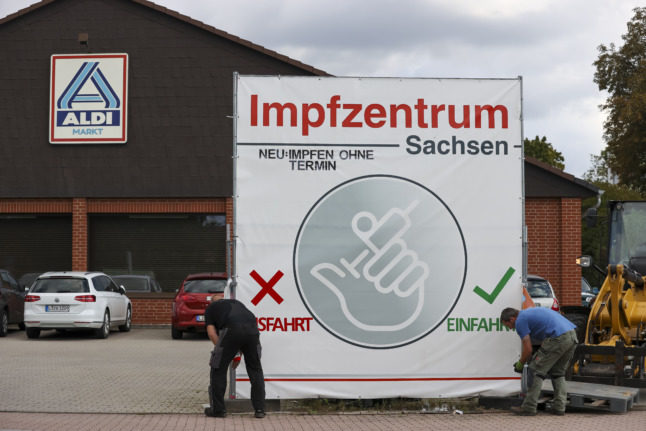 As Germany topped the global charts in daily tallies for new Covid-19 infections late last week, it left me thinking of one of my favourite German words —unsolidarisch—or “without solidarity.” It comes to mind every time I think about the roughly one-third of German residents who could get vaccinated but choose not to.

The reason? Covid-19 vaccinations were never just about protecting yourself from Covid. It was also about doing your bit to help achieve the level of herd immunity necessary to protect those who can’t get vaccinated—whether for medical reasons, or children who can’t yet get an approved Covid vaccine.

But obviously it’s more complicated than this.

Having gone through a long winter lockdown last year and having seen vaccination rates peak months ago, German politicians and health authorities had plenty of time to plan how the country would avoid a repeat of last winter’s absolute hell.

So while blaming the willingly unvaccinated for the new wave, as many do, might feel cathartic, the ultimate responsibility for Germany’s current mess still lies with its governments – and even with its health authorities.

For many of us, getting vaccinated wasn’t just about social solidarity or protecting ourselves. It represented a collective hope that life could one day return to normal. Those jabs carried with them the promise of being able to actually exit soul-destroying and viciously cyclical pandemic-related restrictions. One by one, my friends in Germany and I all got our shots and began seeing each other once again. We had donned FFP2 masks, we had kept distance, worked from home, and were finally getting vaccinated. In short, we had done what was asked of us. We were ready to start going on with our lives.

Far from seeing it as a bureaucratic nuisance, my vaccine certificate brought life’s important moments back – whether it was flying to Italy to see two friends get married, visiting my family in Canada without an expensive hotel quarantine, accompanying my boyfriend to his brother’s wedding in rural England, or literally just having my Berlin friends over again. It felt like a ticket (or QR code) to freedom.

And now we’re left wondering whether German leaders will soon ask us to give that all up again.

Caretaker Health Minister Jens Spahn isn’t ruling out another lockdown. The Robert Koch Institute (RKI) advising the government is urging people in Germany – whether vaccinated or unvaccinated – to reduce their contacts and avoid large events.

While those vaccinated can’t control whether German governments once again shut down events, bars, or restaurants, many might well now ask what the point is of them reducing their contacts?

It’s not clear whether German governments have properly understood the extent to which vaccination represented freedom, especially for younger people who might not think they are at a particularly high risk of developing severe symptoms. The danger is if the vaccinated face the same restrictions as the unvaccinated this winter, some will ask what the original point of vaccination was.

This could easily hobble any future campaign to bolster immunity through booster shots.

‘Pandemic of the unvaccinated’?

German society – and especially its politics and governance – has a reputation for being unsentimental. The last few days have also left me wondering whether German political and health leadership has properly appreciated the personal sacrifices it has asked us to make over the last two years – or if it has reduced pandemic response to plotting out how it can flatten mathematical curves on some abstract graph on their screens. Maths and statistics, after all, don’t take into account missed birthdays, Christmases, weddings, or anything else.

But even from a perspective of pure numbers, some of the claims don’t add up.

RKI top virologist Christian Drosten recently declared that Germany was not in fact experiencing a “pandemic of the unvaccinated”, as the country’s health minister had claimed earlier in November.

But that’s certainly not what the data currently suggests.

And these discrepancies could unfortunately provide another reason for the vaccinated to simply ignore RKI medical advice this winter as well as undermining the institute’s credibility in the future.

While the vaccinated can still catch Covid, the numbers show it’s much less likely and, more importantly, that their cases also tend to be milder.

Reports suggest Germany’s unvaccinated make up over 90 percent of Covid patients in ICUs.

Surely it’s irresponsible to somehow pretend that difference doesn’t exist in the face of such clear evidence?

Any future government response that targets the vaccinated with the exact same restrictions as the unvaccinated just risks alienating many of those who largely did what was asked of them.

No plan for ending the pandemic

Since the pandemic first erupted in early 2020, German politicians like those in neighbouring countries have largely followed strategies for managing the pandemic – rather than actually seeking to end it. There were certain areas, like generous financial support to keep businesses and the self-employed afloat, where this approach paid off.

But being reactive rather than proactive is not working as the various state policies around Covid health passes or 2G/3G showed.

Many German states did not immediately bring in strict, sweeping “2G” rules, which restrict access to many public spaces to the vaccinated (geimpft) and recovered (genesen).

While they were mandated for clubs and large events, smaller venues could choose whether to follow 2G or 3G—which includes the third option of showing a recent negative test (the third “G” being “getestet”).

That left open the possibility of accessing spaces like restaurants and gyms without a vaccination or recovery certificate, dulling incentives to get the shot. Other states left open the possibility of enforcing 2G rules only after Covid cases reached a certain threshold. Again, this only reacts to rising cases, rather than proactively preventing them by incentivising vaccination.

German state leaders should have realised this throughout the autumn months as vaccination rates barely budged, remaining stubbornly at just below 70 percent. Countries like Portugal and Spain have broken 80 percent.

Italy’s vaccination rate is now over five percentage points higher than Germany’s. Covid cases have so far remained low (albeit rising) in the country partly through the stringent checking of immunisation certificates at restaurants, museums, and other public spaces. There is currently no talk in Italy right now of new restrictions and partial lockdowns. That may change of course. By contrast to Italy, it’s only now, with cases spiralling out of control, that many German states are expanding their 2G rules to include a majority of public spaces, like gyms or museums.

Calls from politicians like Bavarian leader Markus Söder to bring in a sweeping 2G rule nationwide, have run into resistance from politicians like Green parliamentary leader Katrin Göring-Eckhardt—a major player in the current negotiations to form the country’s likely next governing coalition. Politicians are only now discussing whether there should be mandatory testing for people to visit care homes or go to work. It’s not clear why these discussions didn’t happen months ago.

Unlike last year, politicians had a previous winter to look back on if they needed any reminders about how bad things could get.

And where are the boosters?

Germany’s current lacklustre booster shot campaign gives us yet another example of a country whose leadership lacks a proactive strategy for actually ending the pandemic—rather than simply managing it. Don’t be embarrassed if you haven’t heard of the booster campaign. We can barely make sense of it ourselves.

The campaign has seen only about half the eight million currently eligible get a booster. It’s also not as if we don’t have any evidence to point to suggesting that boosters work. After being the first country in the world to break a 60 percent vaccination rate earlier this year, Israel rolled out a successful booster campaign to quell spiking case numbers in summer.

But instead of taking the Israeli case as a warning, Germany’s vaccination committee—or STIKO—has still not recommended booster shots for all, as is the case already in some countries. With winter coming and evidence suggesting that even the vaccinated need a top-up every now and then, it’s a mystery why STIKO did not appear to proactively plan a campaign to boost immunity as winter sets in.

What’s more, German politicians have made no major effort to either pressure STIKO to speed up or to demand answers as to why it is taking so long.

READ ALSO: Why Germany’s Covid booster jab campaign has failed to take off

The country is quite clearly still managing the pandemic rather than trying to figure out a way to actually end it. Until that changes its mindset to become more proactive, the country risks a vaccination rate that is perpetually too low and a never-ending cycle of lockdowns—something we used to collectively understand as a temporary extreme measure.