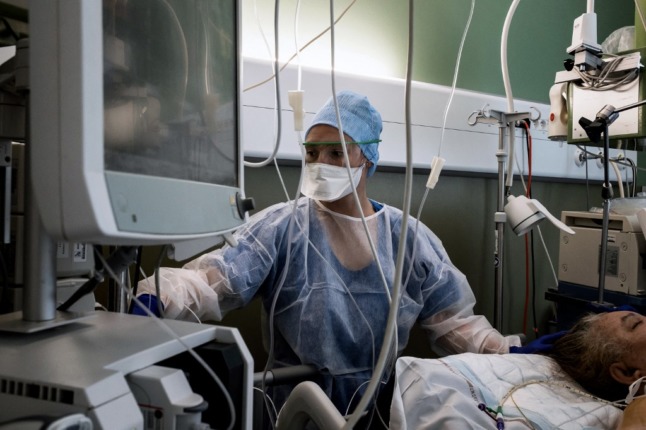 A nurse takes care of a patient infected with Covid-19 in the intensive care unit of Lyon-Sud hospital in Pierre-Benite, on September 8th, 2021. Photo: Jeff Pachoud/ AFP

“Several neighbouring countries are already in a fifth wave of the Covid epidemic, what we are experiencing in France clearly looks like the beginning of a fifth wave,” Véran said in an interview on TF1, adding that the circulation of the virus was accelerating.

However, the health minister said he remained optimistic thanks to the “mass vaccination” of French citizens. “The big difference is that there has been a mass vaccination, because we have the health pass, we respect social distancing measures, so we can overcome this wave like we did the fourth wave, with few ill people in hospital and few deaths,” he said.

In a televised speech on Tuesday, French president Emmanuel Macron announced an expansion of France’s vaccine booster shot programme and made boosters a requirement for a health pass for the over-65s.

From December 15th, the health pass will cease to be valid for over-65s who are eligible for the booster shot but have not had it.

Macron: French Covid health pass for over-65s to depend on booster jab

However, this is significantly lower than in the UK and Germany, which have recorded more than 30,000 new cases per day.

The current national positivity rate, according to the Covidtracker website run by French data scientist Guillaume Rozier, is at 2.89 percent and the R-rate is at 1.13, which means the virus is spreading again, rather than being in retreat as it was when that figure was below 1.

The national number of cases per 100,000 people currently stands at 76, with cases spread out pretty evenly across the country, as this map below shows.

The incidence rate is expected to rise sharply in the next few days to reach 90 cases per 100,000 people, as shown in the following graph.

But with 75 percent of the French population now fully vaccinated, how do increasing case numbers affect hospitals?

The number of hospital admissions had been falling since the end of August, but began to rise again around two weeks ago.

According to CovidTracker, 321 people have been admitted to hospital for Covid-19 in the past week, while 79 were admitted to intensive care units – representing a 25 percent increase compared to last week.

An average of 35 daily Covid-19 deaths (in hospitals) are currently being recorded each week, representing a 15 percent rise compared to week, according to CovidTracker.

The number of deaths had been steadily falling since a spike on August 24th, when 117 were recorded in a single day.

France’s total death toll since the start of the pandemic stands at 118,023.

Demand in Covid booster jabs jumped in France after Macron said a top-up dose would be necessary for people to retain their vaccine passes, the country’s main appointment booking site, Doctolib, said on Wednesday.

“The Macron effect” prompted 149,000 requests for shots, most during and immediately after the president’s televised address on Tuesday evening, Doctolib said.

Anticipation of tougher rules had already sparked 96,000 bookings on Monday, compared with an average of 50,000 a day in recent weeks.

France has one of the strictest vaccination regimes in Europe, with the passes required to take intercity trains, visit museums and go to gyms, among other amenities.

That has pushed France’s overall vaccination rate to 75 percent, a level relatively unchanged in recent weeks.

Doctolib said only 20,000 of the Tuesday bookings were for first-time vaccinations.

In his speech Macron urged the roughly six million people in France yet to get even a first jab to do so.

He also said face masks will again be mandatory for all schoolchildren in a bid to avoid a new wave of cases.

The government is also currently weighing making vaccines available to children under 12.

READ ALSO: How unvaccinated people can use France’s health passport