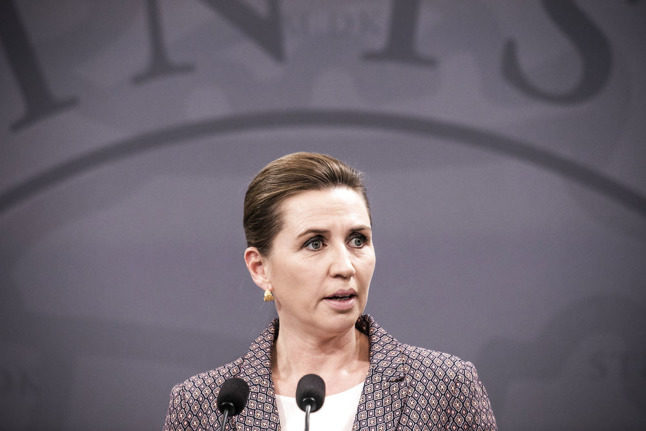 Frederiksen on Monday announced the government would reintroduce requirements to show a valid coronapas (Covid-19 health pass) at bars, restaurants and some events.

During the briefing, Frederiksen and other senior officials confirmed the decision and underlined a number of other messages related to the Covid-19 situation as Denmark enters late autumn.

Frederiksen urges unvaccinated to get a jab

The prime minister did not mince words as she stressed the importance of vaccination in keeping infections and pressure on hospitals at bay.

“It can’t be said clearly enough. Those of you who are not yet been vaccinated: do so,” Frederiksen said.

Data clearly shows lower infection rates and lower hospitalisation rates, and less time spent in hospital with Covid-19 for people who are vaccinated, she said.

“For all of you who are not vaccinated, (things) are going to become more difficult. And that’s also how I think it should be,” she added with reference to incoming coronapas requirements.

Denmark currently has a Covid-19 vaccination rate of just over 75 percent.

Government does not expect new lockdown

A new national lockdown echoing those put into place in March and December 2020 is not an eventuality the government is working towards, Frederiksen said on Monday.

“We are considering to a greater degree what we can do to stop the views small group of unvaccinated people have on the vaccine from ruining everything for the vast majority,” she said when asked about the potential for lockdowns.

The PM did not go into further details as to what that would entail.

The government supports upgrading Covid-19 to the status of “critical threat to society”, following a recommendation from the advisory Epidemic Commission and reversing move in September which saw the status of the virus downgraded and earlier restrictions lifted.

The commission includes representatives from health authorities, the police and four ministries.

A disease is considered a “critical threat” when it threatens the functions of society as a whole, by for instance, overwhelming the health system.

In such instances, the government can impose bans on people gathering, close schools, demand Covid-19 passes, and mandate use of face masks, provided a parliamentary majority does not oppose this.

The government on Monday wants to reintroduce rules requiring a valid coronapas at bars, restaurants, nightclubs and large events, amid surging cases of the coronavirus in Denmark.

The coronapas is used to document a recent negative Covid-19 test or immunity against the virus due to vaccination or recent recovery from infection.

The period for which earlier infection can form the basis for a valid coronapas will be reduced from 12 months to 6 months, Heunicke said during the briefing.

Rules requiring the pass will apply to those over the age of 15, in a change from the earlier minimum age of 16.

Parliament is expected to give the necessary backing for the move.

Provisions to cast a ballot outdoors will be made available at next week’s municipal and regional elections.

Frederiksen said outdoors voting would be offered at poll stations across the country for the November 16th elections. She also said poll stations would ensure adequate cleaning and that hand sanitizer was available.

“You are also welcome to bring a facemask and your own pen, if you are most comfortable with this,” the prime minister said.

Over 400,000 foreign nationals, including non-EU citizens, are eligible to vote in the local elections.

READ ALSO: How to vote as a foreign resident in Denmark’s local elections

Several million mink were culled following the government decision in early November 2020, which was made amid concerns that mutated versions of Covid-19 could emerge from the animals and threaten the effectiveness of vaccines against the coronavirus.

The government order to cull the minks was later found to have no legal basis.

A commission was subsequently appointed to lead an official inquiry into the scandal and was due to submit its conclusions on Thursday.

The conclusions have not yet been made public but have been partly leaked to broadcasters DR and TV2.

The commission also said that Frederiksen “did not have knowledge about of the intention of” misleading, meaning she was not aware that the legal basis for the decision was not in place, according to the reports.

It is not the duty of the commission to make a legal assessment of whether ministers acted intentionally or recklessly.

Parliament has the responsibility for final conclusions, meaning that the minority Social Democratic government’s allied parties on the left wing are likely to have a decisive say in whether the matter is taken forward, following the submission of the commission’s report.

Potential consequences for Frederiksen could take the form of an official reprimand, known as a næse, or the appointment of a special impeachment court, a rare occurrence in Danish politics.

Frederiksen is currently attending a Nato summit in Madrid and was not expected to comment on the matter on Thursday. Earlier this week, she said she “did not believe there was basis for an impeachment court” over the mink scandal.

Denmark was the world’s leading exporter of mink fur until it decided in November 2020 to cull all its 15-17 million minks, after studies suggested that a variant found in some of the animals could jeopardise the effectiveness of future vaccines.

The variant was later considered to have been eradicated before a compensation package worth billions of kroner was agreed for the farmers.

The original order by the government to cull the mink was shown to have been illegal shortly after the initial culling order was given, resulting in one of the biggest scandals in modern Danish politics.