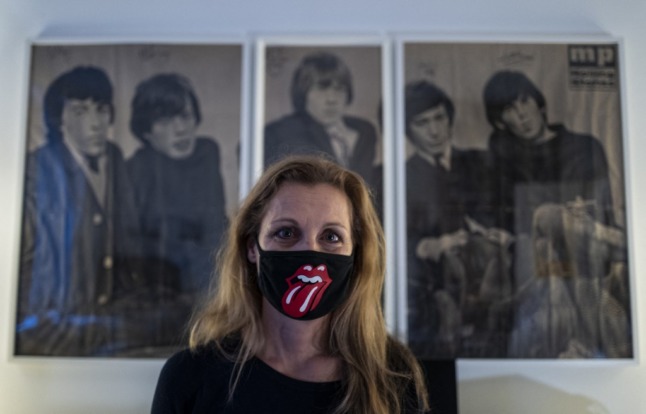 Since then, barely a year has passed without the German office manager catching the still spry rockers on stage somewhere in the world – that is, until the pandemic and the US travel ban.

Now with the United States reopening its borders on Monday to fully-vaccinated foreign visitors after a more than 18-month block on travel
from much of the globe, the 51-year-old Zours will be among the first in line.

Like so much else, her life-long Stones marathon came to a screeching halt with the virus outbreak.

“The tickets I still had from the (cancelled) 2020 US tour were still good but the travel ban was in place and I didn’t know if I would be able to use them,” she said.

“And then (drummer) Charlie Watts died (in August) — it was all an emotional rollercoaster.”

‘This could be it’

Zours, who’s seen the band in action dozens of times – “in the high double digits”, – said superfans like herself worried the tour might never resume given the Stones’ advanced age.

She had a ticket for the St. Louis show, the first since Watts’s death, on September 26 and held out hope that Joe Biden would loosen the rules in time.

“I even thought about travelling via a third country to try to get into the States, then decided it was too risky,” she said.

“I ended up watching it (the Watts tribute) in the middle of the night in bed on a livestream.”

Zours was “frustrated” that even months after the EU opened up to US travellers, the door to America was still shut to Europeans.

“It made no sense – especially for those of us who are vaccinated” and while US infection rates were generally far higher than in most EU member states.

So when the White House finally heralded the good news on October 15, Zours knew she’d be on the first plane.

“Now I’ve got tickets for four concerts, starting in Atlanta then Detroit, Austin and Hollywood, Florida,” said Zours, who plans a three-week odyssey to catch up with the band.

SEE ALSO: US to lift travel ban for vaccinated Europeans on November 8th

For the last several years, being a massive Stones’ fan has been a bit like living on borrowed time, Zours admitted — you never know when your luck will run out.

“You’re always aware it could be the last tour,” she said.

“But now that Charlie Watts is dead, this really could be it.”

Zours’s love for the Stones reaches back to her early adolescence.

“I fell for a classmate and the Stones were a way to get to know him better,” she said.

“It was the 80s and I’d force him to record the albums on cassettes for me. Nothing happened with the guy but the Stones are still with me.”

She’s conscious of the fact that all the travelling to indulge her life’s passion comes at a price.

“The climate summit (in Glasgow) is happening right now and it’s an issue that’s really important to me,” Zours said, noting she tried to offset
transatlantic trips with things like eating less meat.

Then there are some of the Stones’ songs themselves whose macho swagger hasn’t held up well over time.

“‘Brown Sugar’, ‘Under My Thumb’ – it’s true, some of the lyrics are problematic. But I never saw the band as misogynistic or felt put down by them – they empower me.”

Just as many families are looking forward to the end of the US travel ban for emotional reunions, Zours said seeing the Stones again in their element will feel like coming home.

Their music is like a good friend – it’s helped me through crises since I was 12: broken hearts, sad goodbyes, times when I was down,” she said.

“Whenever I hear their music I feel good again.”

SEE ALSO: ‘Better than I could have imagined’ – How foreigners feel about being able to travel to Germany