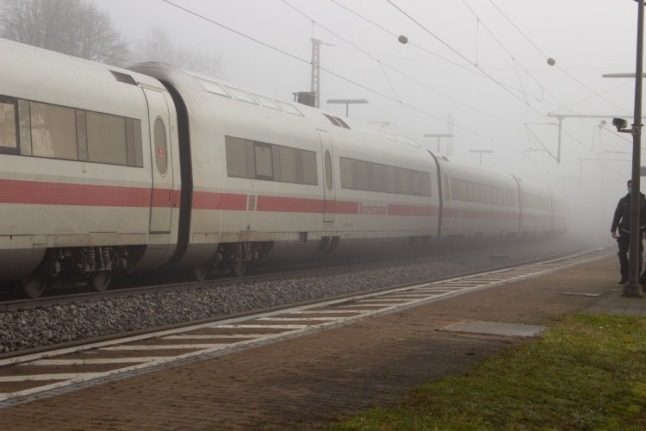 The motive for the attack on the passenger train, making its way from the Bavarian city of Regensburg to Hamburg, was not yet clear.

“According to preliminary information, several people were injured,” police in Neumarkt in der Oberpfalz said in a statement, saying there was “no more danger”.

The Bild newspaper said at least three people had been hurt, two of them seriously.

A police spokeswoman said none of them had suffered life-threatening injuries.

A man has been arrested, police said, without giving any more details.

According to Bild, the suspect is a 27-year-old man of “Arab origin” who may be suffering from psychiatric problems.

The ICE high-speed train was halted in the station of Seubersdorf in the south.

“I would like to thank everyone, especially the police and the train staff, for their brave action, which prevented something even worse from happening.

“The motive for the crime is still unclear and will now be determined.”

The attack took place at a tense time in Germany, which faces terror threats from jihadists and right-wing extremist groups.

Islamist suspects have committed several violent attacks in recent years, the deadliest being a truck rampage at a Berlin Christmas market in December 2016 that killed 12 people.

The Tunisian attacker, a failed asylum seeker, was a supporter of the Islamic State jihadist group.

Seehofer said earlier this year that German authorities had foiled 23 attempted attacks since 2000.

“Germany and Western Europe are still in the sights of radical Islamists,” he warned at the time.

Since 2013, the number of Islamists considered dangerous in Germany has increased fivefold to 615, according to the interior ministry.

Several attacks or attempted attacks were carried out by asylum seekers who arrived in Germany during the 2015 migration crisis.

German officials believe the attackers planned their acts alone, unlike some of the attacks in France in 2015 that were ordered by the Islamic State jihadist group.