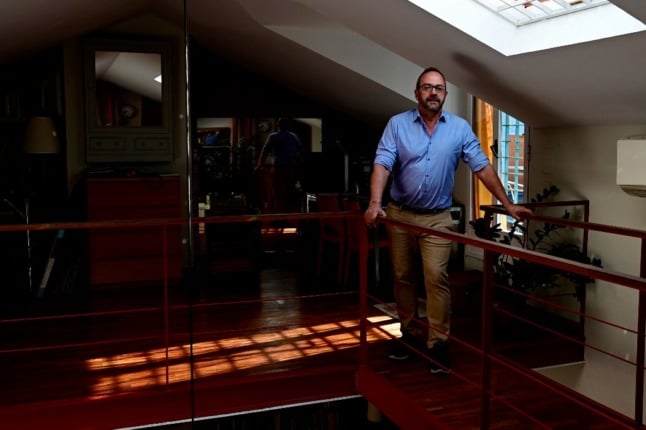 Spanish tour guide Fernando Garcia Salmones, 60 years old, poses at his home during an interview for AFP in Madrid on October 18, 2021. Unlike in other countries where child sex scandals have forced the Catholic Church towards accountability, the Spanish church has actively avoided investigating abuses by its clergy to the fury of victims. Photo: Javier Soriano/AFP

In France alone, a study commissioned by the French Catholic Church found last month its clergy had abused some 216,000 minors since 1950.

But in Spain, there are no official statistics on child sex abuse.

The Church says it has counted just 220 cases since 2001, and has ruled out “actively” investigating any such allegations.

“The case of the Church in Spain is… shameful,” says Fernando García Salmones, who was abused as a teenager at a school run by Roman Catholic priests in Madrid.

“They have no desire to know the truth,” the 60-year-old tour guide told AFP, saying the abuse destroyed his life and left him feeling “dirty”, “guilty” and “like a piece of shit”.

Historically, Spain has always been a deeply-Catholic country, and some 55 percent of the population identifies as Roman Catholic, a religion deeply embedded in the country’s culture.

The Church in Spain has not explained why it is refusing to hold a comprehensive investigation, saying only it has put in place protocols to manage allegations of abuses by its clergy.

For García Salmones, memories of abuse still haunt him today.

“I was studying at the Claretian School of Madrid, I was 14 and one day, the priest jumped on me and continued abusing me every day for practically a whole year,” he said.

On one occasion, he was “abused by the priest and another person who came into the room”, leading him to conclude that the school “knew what was happening and protected” his abuser.

He didn’t speak about his ordeal until he was 40 but by then, the crime was too old to be investigated.

The priest he accused of abuse died in 2009 “without any kind of accountability”.

After García Salmones went public in 2018, he said the school moved to prevent any fresh abuses, with a management statement stressing its “zero tolerance” of any such conduct and commitment “to always investigate any inappropriate behaviour by its members”.

But he says the first reaction of the Spanish Bishops’ Conference (CEE) was to dismiss his account as “a bid to seek financial compensation”.

The Bishops’ Conference declined an interview with AFP.

In a written response, it said it had put in place “protocols for action where cases of abuse were identified and specific training for people working with young people and children”.

It “was aware of 220 cases that had been investigated since 2001”, and had set up offices for “child protection and abuse prevention” in its 70 dioceses where complaints could be filed.

Such offices could also “help victims” and “investigate, where possible, the circumstances under which (abuses) occurred”.

According to the CEE’s website, its 2010 action protocol outlined steps such as barring anyone accused of abuses from working with children.

In 2019, a committee presented a draft child protection decree, which remains unfinished.

But the Church has ruled out any exhaustive inquiry.

“We are not going to proactively engage in a comprehensive investigation of the matter,” Monsignor Luis Arguello, the CEE’s secretary general said in September.

The Church “gives the appearance of doing something but it’s not,” says Juan Cuatrecasas, head of victims’ association Infancia Robada, or ‘stolen childhood’ in English.

“It is doing its homework very quickly and very badly,” he says, pointing to a bigger picture of “stonewalling and denial”.

Jesús Zudaire, who runs a victims’ association in the northern Navarre region and was himself abused, says Spain could “easily” have a similar number of cases to France.

He highlights the power of the Church in Spanish society and its cosy arrangement with the decades-long dictatorship of Francisco Franco, which ended in 1975.

El País newspaper began investigating abuse allegations in 2018 and has since received details of 932 cases.

In not taking a proactive approach, the Church “is damaging human rights” and inflicting further harm on the victims, says campaigner Cuatrecasas, whose 24-year-old son was abused by a teacher at a Catholic school in Bilbao between 2008 and 2010.

The teacher was initially handed 11 years in jail but the Supreme Court reduced his sentence to two years, and as a first offender he spent no time behind bars.

Although the Church follows abuse prevention protocols in line with those laid out by the Vatican, victims’ groups want the Spanish government to step in with legislation to prevent Church cover-ups.

Earlier this year, Spain’s parliament approved a child protection law extending the statute of limitations for abuse cases, meaning survivors can report abuses for up to 15 years after they turn 35.

Previously, the clock started when they were 18.

Although victims wanted the legislation to be retroactive, they hailed the step as a positive first move.

The interior ministry said the bodycam was launched Monday and would be “rolled out on a gradual basis to all police officers”, without saying how many were involved in the initial stages.

Spain’s TVE public television said the tiny cameras were being attached to the officers’ uniforms and could be activated either manually or automatically.

The main Spanish police union JUPOL hailed the move on Twitter, saying it was in response to “a request that the union has been making”.

“It will guarantee security, both for us to avoid any kind of misrepresentation of our interventions, as well as for the public, who will be able to clearly see the police’s professionalism and that there is no abuse of power nor excesses,” union spokesman Pablo Pérez told TVE.

Forces in Europe and the United States are increasingly turning to such technology to boost transparency following a string of fatal shootings and other claims against police over the past decade.

“The cameras are being used under public safety protocols in order to record everything that happens in the event of an unwarranted offence during an operation,” Spanish Interior Minister Fernando Grande Marlaska told TVE ahead of the rollout.

“If they are activated, it is to guarantee security and really be transparent so that the officers’ actions can be seen and checked,” the minister said.

“This means security for both the police and the public,” he added, suggesting that in time, they would also be available to Spain’s Guardia Civil rural police force.

France began trialling bodycams, known as “pedestrian cameras”, in 2013
before a gradual rollout in 2015 in a move welcomed by police, but greeted with scepticism by rights groups who said there was no guarantee they would be always activated.

Police in London and New York also began pilot schemes in 2014 with credit-card-sized cameras clipped onto their uniforms with the technology gradually deployed over the following years.

But the cameras have had mixed success. The absence of any legal obligation governing their use can also limit their scope to uncover police misconduct.