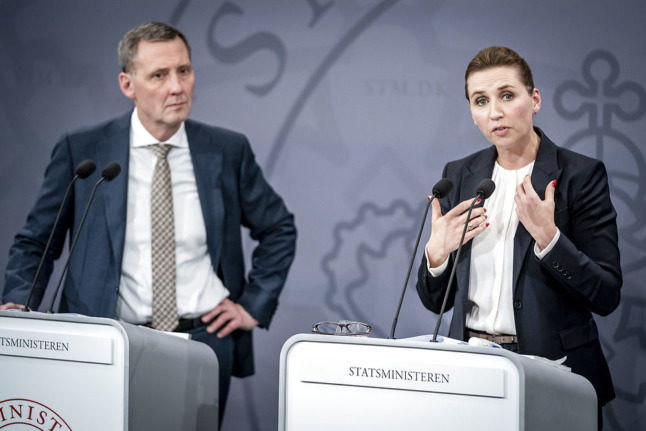 While Frederiksen attempted to offer reassurance by addressing questions over the issue, opposition politicians immediately reacted by saying she had failed to answer sufficiently and had even given rise to more questions.

It is “too early to say” what the overall consequences of the issue will be for Frederiksen and her government, an expert said.

Denmark controversially killed all of its 15-17 million minks late last year over a mutated strain of Covid-19 found in some of the animals.

A subsequent official inquiry into the government’s handling of the matter requested access to Frederiksen’s cell phone text messages and those of three close advisers.

However, the prime minister said they no longer existed as her phone setting automatically deleted them after 30 days. She earlier said that she had been advised by her ministry to delete texts after 30 days for security reasons.

It later emerged that some other government ministries do not automatically delete their texts.

Automatic deletion of her texts was implemented sometime in summer 2020 after a review of “different security questions”, Frederiksen said in a briefing Wednesday. The timeline of summer last year would place it several months before the mink decision was made.

“I understand it can look strange. But I want to make it absolutely clear that we had no wish to erase anything. I take responsibility for what we did,” Frederiksen said.

“I’m the prime minister of this country. I’m not covering anything up,” she also said.

Frederiksen has had several phones since becoming prime minister in 2019 but neither her office nor Frederiksen herself could say where her decommissioned mobiles are now located.

The policy to delete texts remains in place today, she also confirmed.

“But it’s clear that with the discussion that’s taking place now, we need to discuss the guidelines,” she said.

Justice minister Nick Hækkerup said at the briefing that deletion of texts was “in line with the rules” and that, SMS messages can be exempted from relevant record keeping requirements.

“In practice, SMS’ will very seldom need to be kept on record,” Hækkerup said.

Sophie Løhde, political spokesperson with the Liberal (Venstre) party, said there were “significantly more unanswered questions than what was answered at this press briefing”.

Both opposition lawmakers noted in particularly the lack of specificity given by the PM on when automatic deletion of texts was initiated.

Poulsen also pointed out the difference in practice between the PM’s office and the justice ministry, which does not delete texts.

He and Løhde both suggested they would press Frederiksen on the issue in parliament.

The pressure on the prime minister over the deleted texts is not gone, but is lessened after Wednesday’s briefing, said analyst Erik Holstein, political commentator with media Altinget.

“The pressure isn’t gone, but I think it will decrease. There’s no doubt that the right thing to do in a situation like this is to have a long press conference,” Holstein said.

“Now you certainly can’t claim that she’s not accessible to the press and that she won’t actively address the questions,” he added.

But Frederiksen “will still be asked about” aspects like when deletion of texts began, he predicted.

It is “too early to see” if there will be any longer term consequences for the government, he also said, noting that the texts could still be recovered and their content revealed.

On December 6th, ongoing negotiations to form a government will tie the all-time record for Denmark’s longest ever with the 35-day negotiation of 1975.

But the Liberal party is still holding out for more concessions from Frederiksen and the Social Democrats, its leader Jakob Ellemann-Jensen said after another major party on the right, the Conservatives, quit the talks over the weekend.

“The Liberals will continue negotiations with the Social Democrats in the coming days,” Ellemann-Jensen wrote on Twitter.

“If the Liberals are to commit to an agreement with the Social Democrats – whether in opposition or in government – the content of that agreement should be above the usual level of political ambition,” he said.

Ellemann-Jensen has cited to changes to the top tax bracket as a party priority, though that’s been a non-starter for the Social Democrats.

The withdrawal of the Conservatives means the Liberals are the only party on the right who could realistically enter government with the Social Democrats.

Six of the 12 parties elected to parliament at the election now remain in government talks with the Social Democrats.

These are the Liberals, Liberal Alliance and Danish People’s Party from the ‘blue bloc’ and the Social Liberal (Radikale Venstre) and Socialist People’s Party (SF), from the red bloc side. The centrist Moderates are the final party.