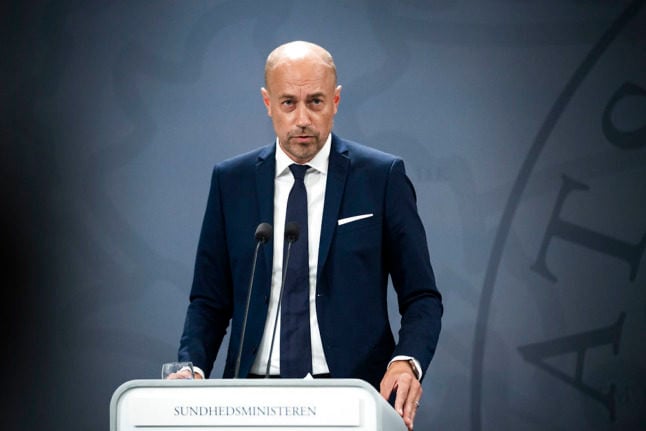 Danish health minister Magnus Heunicke, who has urged more people in the country to get vaccinated against Covid-19 as infection rates increase . Photo: Martin Sylvest/Ritzau Scanpix

Heunicke’s message came after the number of patients hospitalised with the coronavirus in Denmark approached 200 for the first time in months.

“A huge appeal from me: If we are to keep Denmark open, we must get more people to get the vaccine,” Heunicke said.

Denmark’s reproduction rate or R-number for Covid-19 was 1.2 on Tuesday. That means 10 infected people will pass the virus on to 12 others, thereby allowing the epidemic to spread.

A degree of uncertainty is attached to the measure, which has increased in recent weeks.

The number of new infections registered daily was 1,253 on Tuesday, the seventh consecutive day in which over 1,000 new cases have been registered.

“We knew an increase (in infections) would come this autumn. But it’s no secret that the increase has come rather quickly already here in the month of October,” Heunicke said.

Denmark has a Covid-19 vaccination rate of 75.1 percent of the population, while 76.2 have had at least the first dose of a vaccine.

Unvaccinated people will “in all likelihood” be infected with Covid-19 during the course of the winter, according to Heunicke.

“We are following it very closely. We have always said that we won’t hesitate to react if there was a need to. We have a completely open society and we have very, very strong support from the public for vaccination. Now we need to get more people on board,” the minister said.

An increasing infection rate in society runs the risk of putting hospitals under strain, given the likelihood of more hospitalisations it entails.

Heunicke urged people with symptoms to get tested for the virus.

“We are only in October. That means the winter season is ahead of us, so it could be a very hard season for our hospitals,” he said.

READ ALSO: European travellers warned they may have to self-isolate in UK