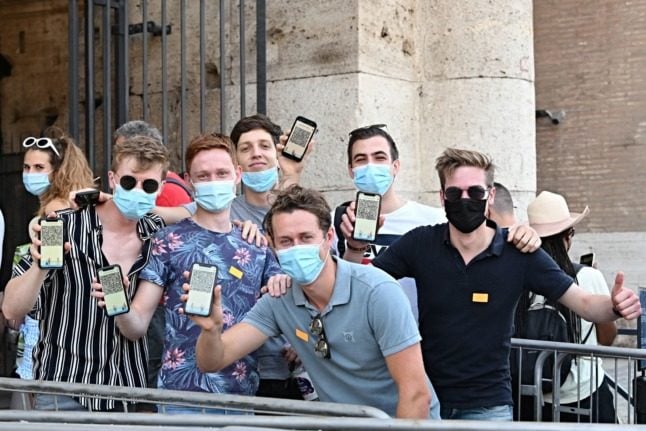 Italy recorded a total of 105,569,806 ‘green pass’ downloads on Saturday, according to the latest data on the government’s certificazione verde Covid-19 portal.

The number marks an increase of over 878,000 green passes compared to the day before.

These figures mean “that citizens have become aware of the importance of this tool to continue on this path,” deputy Health Secretary Andrea Costa told RaiNews24.

“The silent majority of our country has prevailed, which, while politics debated the usefulness of the ‘green pass’, in the meantime [the population] has adhered to it,” he added.

Following the expanded green pass rules on October 15th, the number of green pass downloads hit a new record on Monday, with over one million ‘green passes’ downloaded in just one day.

Italy has completed its first working week under the newly extended health certificate rules, following a decree to make the health certificate mandatory by law for all workers in Italy to show a green pass to access any workplace – with steep fines in place for those not complying. A ‘green pass’ is needed in all areas of work in Italy. (Photo by Andreas SOLARO / AFP)

Green passes are available to everyone who is vaccinated or recently recovered from Covid-19, but can also be obtained by getting a negative test, at the person’s own expense.

While Italy’s latest health pass requirement has prompted an increase in vaccinations, the download figures show the vast majority continue to take a Covid test instead.

Friday’s figures reveal that out of a total of almost 878,000 downloaded ‘green passes’, over 661,000 were granted following taking a swab test (tampone), while some 213,000 green passes were downloaded following vaccination.

Only just under 4,000 health certificates were generated as a result of proof of having recovered from Covid-19.

Those who refuse to be vaccinated will mostly only be able to attend work if they pay for their own tests either every 48 or 72 hours, depending on the type.

Those vaccinated are covered for 12 months after completion of the vaccination cycle, or if it’s their first shot, their green pass is valid until they get their second dose.

The pass requirement has already been in place for school and university employees and care home workers since September, and a vaccine mandate has been in place since April for anyone working in healthcare, including in pharmacies and doctors’ offices. People gathered during a protest against the green pass across Italy when it was extended even further. Piero CRUCIATTI / AFP

Meanwhile, the number of Covid-19 cases among health workers is rising. This week 371 cases have been recorded compared to 306 in the previous week, making up 3.6% of the total number of cases in the population, according to the latest extended surveillance report by the Higher Health Institute (ISS).

Analysing the trend in diagnosed cases among healthcare workers, the report stated, “In early July there was a slight increase in correspondence with the increase in the number of cases in the rest of the population.

“Since the second half of August, the number of cases diagnosed in the population has been falling sharply, while the number of weekly cases notified among healthcare workers has been increasing.”

The efficacy of anti-Covid vaccines “remains high” against the Alpha and Delta variants of the SarsCoV2 virus, although there is a slight drop in efficacy against Delta, according to the report.

The vaccine efficacy in preventing “any symptomatic or asymptomatic diagnosis of Covid-19 in fully vaccinated persons” decreased from 89% when the Alpha variant was prevalent to 79% during the Delta-variant epidemic phase.

Vaccination effectiveness in preventing diagnosis with subsequent hospitalisation “remains high”, however, at 92% (versus 95% in the Alpha phase).

In intensive care the efficacy stands at 95% for Delta phase vs 97% of Alpha phase and deaths are now 91% vs 97% in the Alpha phase.

The incidence rate over the period October 4th – 17th October shows a decrease throughout all of Italy’s regions, except for Valle d’Aosta.

Almost 82% of the Italian population over 12 years old have been vaccinated as of Saturday, according to the latest government figures.

Just under 46.5 million people in Italy have now received at least one dose.