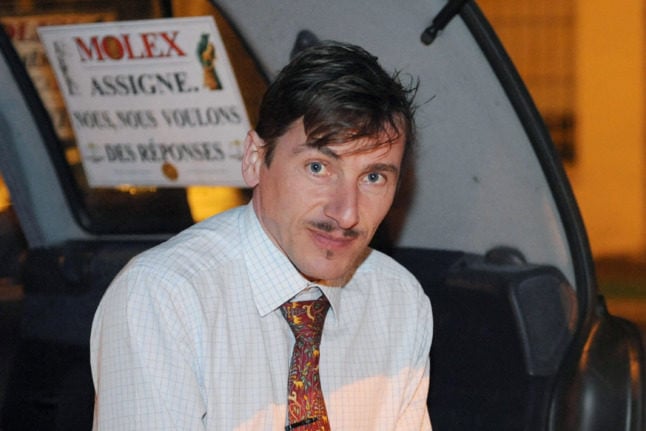 Remy Daillet-Wiedemann during a "Greve du Froid" in 2009 to protest against a factory closure. Photo: REMY GABALDA / AFP.

Daillet, 54, and his secretary – identified as 67-year-old Ginette M. – were placed in custody on Tuesday “for planning attacks against the state and other violent action,” including an attack on a Masonic lodge in eastern France, the source said.

Daillet is also alleged to having helped organise the abduction of an eight-year-old girl in eastern France in April at her mother’s request.

He was arrested in June over the kidnapping as he returned to France on a flight from Singapore.

Mia Montemaggi was found safe with her mother in a squat in a disused factory in Switzerland, five days after she was taken from her grandmother’s home in the eastern Vosges region by three men posing as child protection officers.

An anti-terrorist judge had ordered the arrests of Daillet and others as part of an investigation into a shadowy group known as “Honneur et nation” (Honour and nation).

The 12 suspects are accused of plotting a series of attacks, including against vaccination centres, a masonic lodge, prominent people and journalists, according to sources close to the case.

The team had “a multitude of violent actions planned, targeting institutional sites, vaccination centres, 5G antennas…,” one source familiar with the case had said earlier.

Another source had said the suspects had “the idea of a coup d’etat, of an overthrow of the French government”.

Daillet has called for a ban on face masks which he claimed were “scientifically useless” in videos and for 5G networks to be destroyed.

Daillet’s lawyer, Jean-Christophe Basson-Larbi, said on Thursday his client had “no links either with the ‘Honneur et nation’ grouping nor with the planned attacks” or “acts of neo-Nazi terrorism”.

“No objective element points to his involvement,” he said, adding that Daillet was a “political prisoner”.

Border police reportedly shot a man with aggressive behaviour who brandished a knife in the public area of the Charles de Gaulle airport outside of Paris, on Wednesday morning, police and airport sources told AFP.

“This morning officers neutralised a threatening individual in possession of a knife at the Roissy-Charles de Gaulle airport,” the Paris police department said on its Twitter account.

A source close to the investigation told BFMTV that the man – who was likely homeless – went towards the officers, despite being asked several times to put the knife down. In response, police shot the man in the abdomen, and the individual later died.

The incident took place in the busy, public area of terminal 2F around 8:20 am, when “a homeless man started bothering security agents and border police were called in to remove him”.

Initially the man left while yelling curses but he soon returned and brought out a knife, when one of the officers fired his weapon.

An AFP photographer who witnessed the scene said “a large person of colour brandished something that looked like a knife at the police”.

“He was ordered to stop but kept advancing toward them, and an officer fired a single shot.”

The man was quickly put on a stretcher and evacuated, the photographer said.

Security forces have been on high alert for terrorist attacks since a wave of jihadist killings that have killed more than 250 people since 2015, often by so-called “lone wolves” who often target police.