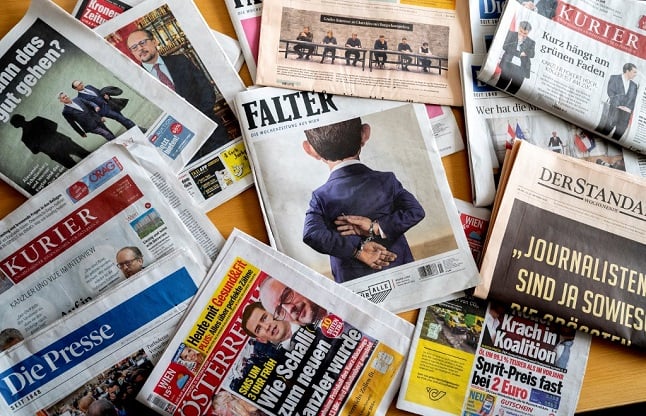 The scandal erupted this month when prosecutors raided locations including the chancellory and the finance ministry.

They are currently probing allegations that Kurz’s inner circle used public money to pay for polls skewed to boost his image. Prosecutors also suspect that in return for running the surveys, and other fawning coverage of Kurz, a major tabloid received lucrative public adverts.

Kurz and all those under investigation deny any wrong-doing. But the fact that government adverts are used as a means of influencing the press has long been an “open secret”, says Yilmaz Gulum, a political journalist with public broadcaster ORF.

In the small EU member state of 8.9 million people, large swathes of the press have become reliant on public money as “their economic model of print media has been destabilized by the internet”, says Fritz Hausjell, deputy head of  the media and communications department at the University of Vienna.

By far and away the largest source of public funds has been ad spending by regional and national government, which has grown to €220 million ($256 million) a year.

However, many official ads seem to have little informational content and are used instead to show beaming ministers or mayors wishing citizens a “Merry Christmas” or “sunny summer”.

According to media expert Andy Kaltenbrunner from the University of Salzburg, the Österreich and Heute freesheet tabloids are the most dependent on government funds, accounting for 20-40 percent of their revenues. Gulum says the way the ads are placed across the sector amounts to “market distortion” with tabloids receiving much higher sums than the broadsheets, some of which are more critical of the government.

Former Foreign Minister Karin Kneissl said in May this year that when she took office in 2017 and made huge cuts to the ministry’s ad budget “many were horrified”. The aim of ad spending was generally seen as “buying goodwill in press coverage,” she explained to a parliamentary committee investigating corruption.

Huasjell points out that the system can be used to exercise influence in both directions. Tabloids like Oesterreich can exert pressure on government by saying: “If you don’t buy lots of ads, then we’ll take you down or disregard you.”

Henrike Brandstötter, an MP for the opposition liberal Neos party, says the upshot of the system is that “with some media (the audience) can’t have confidence that what’s written is always correct”. Sebastian Kurz is surrounded by media as he arrives to attend the parliamentary session at the Austrian Parliament in Vienna, Austria, on October 14th. Photo: Joe Klamar/AFP

The advertising issue is one reason Austria has slid 10 places down the press freedom rankings compiled by the Reporters Without Borders (RSF) pressure group since 2015. In its latest report on Austria, RSF said that despite the entry of the Greens into government — “a party that claims to respect the highest press freedom standards” — there has been little progress on “press financing reform”.

The press is therefore likely to remain “dependent on state funding for some time”, it added.

Brandstötter sees the solution lies in capping the amount the government spends on ads and instead upping the amount of direct public subsidy. Advocates of this route say subsidies would be less liable to manipulation by the government of the day as they would be shared more equitably across the sector and on a more stable basis.

The other aspect of the media landscape cast in a dubious light by the latest scandal is polling. Kurz’s aides are suspected of commissioning polls which were massaged in order to smooth his path to the chancellery. Brandstötter calls them a “manipulation of public opinion”.

The polling company that carried them out was not a member of the polling industry association VdMI because it didn’t meet the group’s quality control standards. These include a minimum of 800 respondents per survey and avoiding using online-only polls.

Christoph Hofinger of the SORA polling institute — one of the country’s most respected — called for improvements in his field.

“When polls appear that aren’t up to standard, they shouldn’t be used in public debate,” he said.