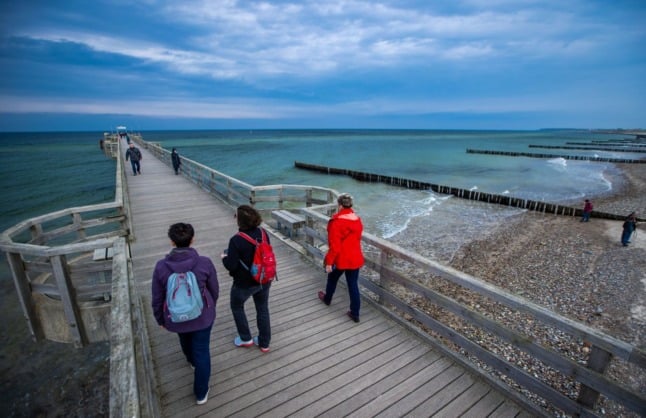 You can find our most up-to-date story here: Storms across Germany spark travel disruption

People living in Germany should expect disruption throughout the day as heavy gusts, rainfall and thunderstorms hit the country in the first major storm of autumn.

Gale-force winds of over 100 kilometres per hour are possible at times, according to the German Weather Service (DWD).

The DWD said on Twitter that “widespread gale-force to severe gusts (75-90km per hour) and locally gale-force gusts up to 110km per hour” are expected along with heavy showers and thunderstorms. Severe-gale force to hurricane-like winds are possible in some mountain ranges.

Late on Wednesday and in the early hours of Thursday, a low pressure system will move into Germany from the west bringing the storm, DWD said. Meteorologist Tobias Reinartz said that disruption to travel should be expected due to fallen trees and debris.

Deutsche Bahn warned there may be cancellations and disruption on their rail network due to the weather. Passengers should check before trying to travel.

The DWD issued an orange storm weather warning (level 2) for most of the country on Wednesday night and Thursday. For some areas a more severe red warning (level 3) is in place.

On exposed peaks such as the Brocken, the Feldberg in the Black Forest or the Fichtelberg, winds of up to 120km/h are possible, reported Tagesschau. DWD meteorologist Julia Schmidt said that gale-force winds cannot be ruled out on the coasts either.

According to forecasters, the wind will be weaker in the southeast, with gusts of 55 to 75km/h. There may still be showers and thunderstorms there.

Over the course of Thursday afternoon, the wind will decrease from the west, according to the DWD. But it will likely remain stormy in the north into Friday.

On Friday, rain will fall in the northern half of the country and at the edge of the Alps – otherwise there will be mostly sunny spells elsewhere.

On Thursday temperatures will range between 13 and 18C, on Friday mostly between 8 and 13C. Saturday will be similar. A mix of sun, clouds and fog is to be expected, the DWD said. Sunday will bring sun and 12 to 17C. From Tuesday at the latest, more unsettled weather will move in again.

Due to the storm warnings, the zoo and animal park in Berlin will remain closed on Thursday.

“We know from experience that such storm warnings should by no means be taken lightly,” Zoo and Tierpark director Andreas Knieriem said on Wednesday. The move is to protect guests and animals from falling branches.

The aquarium is scheduled to open as usual. Guests with tickets for Thursday are asked by zoo management to contact them for rebooking.

Several green spaces in the city will also remain closed due to the storm warnings, the state-owned Grün Berlin group said. The Gardens of the World, the Britzer Garten, the Schöneberger Südgelände Nature Park and the Blankenfelde-Pankow Botanical People’s Park will remain closed on Thursday due to the predicted gale-force winds.

The cable car between Kienbergpark and the Gardens of the World in Marzahn will also be suspended. However, Tempelhofer Feld, Park am Gleisdreieck, the Mauerpark extension areas and Kienbergpark will remain accessible, according to Grün Berlin.