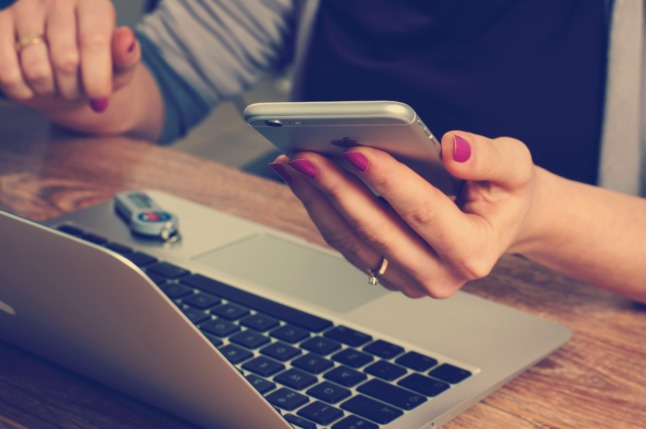 A woman looks at her mobile phone. Illustration photo by Firmbee.com on Unsplash

The messages, written in German, ask the recipient to click on a link in order to read or listen to a multi-media message or to stop receiving further messages.

The aim of the hackers is to infect the user’s phone with malware – short for malicious software – to steal any passwords and personal information it contains.

The scope of this scam “is unheard of in Switzerland”, according to a Geneva daily newspaper, Le Temps, which reported the “massive wave of SMS attacks”.

All the links are unique and the messages are almost always sent from Swiss phone numbers although some may come from an Austrian number, Le Temps reports. The messaging app Signal has also reportedly been targeted.

According to Le Temps Android phones are more vulnerable than iOS phones if the links are clicked on. The malware can even start sending out messages from your phone to people in your address book.

So if you receive a message from a friend with a strange link, don’t click it.

READ ALSO: The most common online scams in Switzerland and how to avoid them

The advice to smartphone users is simple: don’t click on the messages or any links within them.

Simply delete the messages as soon as they are received.

Blocking the numbers won’t be effective as the messages are sent from different numbers.

If you have received messages of this nature, report it to your network provider.

The NCSC’s basic advice for people is: “Never install a program from a website via a link sent to you by text or email. Install only necessary programs and applications and always download them from the producer’s site or an official download platform.”

More information on how to avoid text message scams is available at the following government link.