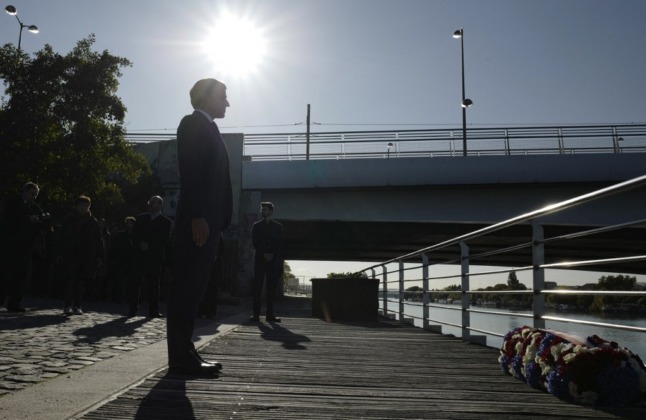 French President Emmanuel Macron stands to attention after laying a wreath near the Bezons bridge, where the protest started, on October 16th, 2021 in Colombes, near Paris. (Photo by Rafael Yaghobzadeh / POOL / AFP)

Macron told relatives of victims on the 60th anniversary of the bloodshed that “crimes” were committed on the night of October 17th, 1961 under the command of the notorious Paris police chief Maurice Papon.

He acknowledged that several dozen protesters had been killed, “their bodies thrown into the River Seine” and paid tribute to their memory.

The precise number of victims has never been made clear and some activists fear several hundred could have been killed.

Macron “recognised the facts: that the crimes committed that night under Maurice Papon are inexcusable for the Republic”, the Elysee said.

“This tragedy was long hushed-up, denied or concealed,” it added in a statement.

Algerian President Abdelmadjidn Tebboune said there was “strong concern for treating issues of history and memory without complacency or compromising principles, and with a sharp sense of responsibility”, free from “the dominance of arrogant colonialist thought”, his office said in a statement.

The deadly 1961 crackdown revealed the horror of “massacres and crimes against humanity that will remain engraved in the collective memory”, he said in a statement released by his office.

“There were bodies on all sides, I was very afraid”, recalled Bachir Ben-Aissa Saadi, who took part in the rally and was 14 years old at the time.

‘Much further’
The rally was called in the final year of France’s increasingly violent attempt to retain Algeria as a north African colony, and in the middle of a bombing campaign targeting mainland France by pro-independence militants.

Papon was in the 1980s revealed to have been a collaborator with the occupying Nazis in World War II and complicit in the deportation of Jews. He was convicted of crimes against humanity but later released.

Macron, the first French president to attend a memorial ceremony for those killed, observed a minute of silence in their memory at the Bezons bridge over the Seine on the outskirts of Paris where the protest started.

His comments – that crimes were committed – went further than predecessor Francois Hollande, who acknowledged in 2012 that the protesting Algerians had been “killed during a bloody repression”.

However, as expected, he did not issue a formal apology. He also did not give a public speech, with the Elysee issuing only the written statement.

The president, France’s first leader born after the colonial era, has made a priority of historical reconciliation and forging a modern relationship with former colonies.

But Macron, who is expected to seek re-election next year, is wary about provoking a backlash from political opponents.

His far-right electoral opponents, nationalists Marine Le Pen and Eric Zemmour, are outspoken critics of efforts to acknowledge or show repentance for past crimes.

Historian Emmanuel Blanchard told AFP that Macron’s comments represented “progress” and had gone “much further” than those made by Hollande in 2012.

But he took issue with the decision to pin responsibility on Papon alone, saying that then prime minister Michel Debre and president Charles de Gaulle had not been held to account over the ensuing cover-up or the fact Papon would remain Paris police chief until 1967.

‘State crime’?
The statement by Macron “is progress but not complete. We hoped for more,” Mimouna Hadjam of the Africa93 anti-racism association told AFP.

“Papon did not act alone. People were tortured, massacred in the heart of Paris and those high up knew,” Hadjam added.

Domonique Sopo, the head of SOS Racism, said while the comments were welcome, Macron was showing a tendency of taking “small steps” on such issues by reducing responsibility to Papon alone.

The 1961 protests were called in response to a strict curfew imposed on Algerians to prevent the underground FLN resistance movement from collecting funds following a spate of deadly attacks on French police officers.

Some of the worst violence occurred on the Saint Michel bridge near the Notre-Dame cathedral where witnesses reported seeing police throwing Algerians into the river Seine where an unknown number drowned.

Macron’s comments come in the midst of an an ongoing diplomatic row between Paris and Algiers fuelled by comments attributed to the president describing the country as ruled by a “political-military system” that had “totally re-written” its history.

READ ALSO: What is behind the diplomatic spat between France and Algeria?

A report commissioned by the president from historian Benjamin Stora earlier this year urged a truth commission over the Algerian war but Macron ruled out issuing any official apology.

Another historical commission set up by Macron also found that France had overwhelming responsibilities over the 1994 genocide in Rwanda, in a finding that has led to a certain thawing in ties between Paris and Kigali.

“France is looking at all its history with lucidity and recognises responsibilities that have been clearly established,” the Elysee said.