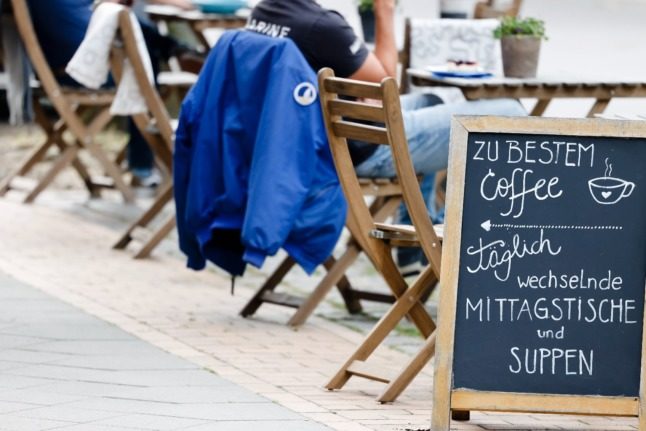 A cafe in Kiel, northern Germany. Many people in the service industry have 'mini jobs'. Photo: picture alliance/dpa | Frank Molter

Mini-jobbers lose out on cash

People with a mini-job – a position where the employee earns no more than €450 per month – are not due wage compensation from their employer if there’s a forced closure by authorities of their workplace, says a German court.

According to a ruling by the Federal Labour Court, business closures in the pandemic are not part of the ‘general operational risk’ for entrepreneurs. Therefore, they do not bear the risk for the loss of work of mini-jobbers. And that means they do not have to pay remuneration to people with mini-jobs who were affected by closures.

READ ALSO: Why the Covid crisis is hitting people with mini-jobs in Germany hard

The case was lodged by a mini-jobber from Bremen who was working as a saleswoman when the branch had to close by order of the authorities in April 2020. She argued that the closure of the sewing machine shop during the pandemic was part of an ‘operational risk’ that the employer had to bear, and asked for remuneration.

The lower courts in Lower Saxony had upheld her claim, saying that if employers are available for the agreed work they must still be paid. But the Federal Labour Court in Erfurt on Wednesday overturned their decision. It means the employer does not have to pay the disputed remuneration of €432 for one month.

The judges in Erfurt argued that it was the state’s responsibility to compensate for the financial disadvantages caused by the Covid restrictions – not the boss.

The government’s Kurzarbeit (reduced working hours) scheme is meant to support employees affected by closures. But here’s the catch – people with mini-jobs are not entitled to Kurzarbeit.

Mini-jobbers do not pay unemployment insurance contributions so they are not entitled to shorter hours benefits.

The judges on Wednesday said this issue means there are “gaps in the regulatory system subject to social insurance”.

The case brings into focus a group of workers who have been badly affected by the pandemic. Labour lawyer Michael Fuhlrott said mini-jobbers are left to bear the costs of closures.

There is no possibility of receiving compensation from the state, and the Federal Labour Court has not answered this question either. The court states in vague terms: “It is up to the state to provide adequate compensation, if necessary”. The detailed reasoning of the judges has not yet been made public.

According to figures from the German Retail Association (HDE), there were about 808,000 marginally employed workers in the retail sector alone at the beginning of the year. Lots of people also have mini-jobs in the service industry.

The big debate over employees working from home continues. A new report states that every fifth company in Germany wants to allow staff to work flexibly between the home and workplace in the longer term.

According to the survey by the Nuremberg Institute for Employment Research (IAB), 20 percent of employers in Germany want to expand the possibilities for mobile working.

But two-thirds of the companies – around 66 percent – want to reduce it back to pre-crisis levels.

The institute surveyed businesses across Germany between July 5th and 20th.

“The share of establishments that want to expand the home office option is much higher among large companies with over 250 employees than among small and medium-sized enterprises,” said IAB researcher Christian Kagerl.

Up to 30,000 jobs at Volkswagen could be at risk if the German auto giant is unable to reduce the costs of its transition to electric models, its chief executive told a recent supervisory board meeting, according to a company source on Wednesday.

The business daily Handelsblatt reported that CEO Herbert Diess had “expressed his concern” for VW’s future at a board meeting on September 24th and had complained that, compared with rivals, VW’s costs were too high.

“The restructuring of Volkswagen could put one in every four jobs at risk” at the core VW brand and the “abolition of 30,000 jobs” was possible, the newspaper wrote, citing internal discussions.

READ ALSO: Berlin teacher shortage and what to know about holiday pay

Quizzed by AFP, a spokesman for Diess conceded that the carmaker needed to “deal with the competitiveness of our plant in Wolfsburg”, drawing a parallel with US electric car pioneer Tesla, which is close to starting production at a plant near Berlin.

“The debate has started and there are already a lot of ideas,” the spokesman said, but there were no “concrete scenarios” as yet.

A labour source on the supervisory board told AFP that Diess had been “speculating about an extreme scenario” and had drawn a comparison with the introduction of a four-day week in 1994, which “saved 30,000 jobs”.

There was “consensus” that “if the right adjustments are not made in the coming years, it could, in the worst case, impact employment”, the source said.

But a spokesman for the works council dismissed the suggestion that 30,000 jobs could be axed as “absurd and unfounded”.

VW – whose 12 brands include Audi, Porsche and Skoda – is pumping billions of euros into the shift to electric and aims to become the world’s largest electric carmaker by 2025.

Have you recently taken the plunge and launched your own business or become freelance in Germany? Well, congratulations – as the entrepreneurial spirit is declining overall in Germany.

“We observed that start-up activities in the commercial sector have been declining for years: the average start-up intensity has decreased nationwide from 92 start-ups per 10,000 working-age people in 2003 to 47 in 2019,” Dr Rosemarie Kay, deputy managing director at the Institut für Mittelstandsforschung (IfM) Bonn, told The Local.

The IfM evaluated official stats to look at the startup dynamics and the development in Germany’s 401 districts and cities.

“Across the districts, we see an extremely heterogeneous picture: on average, the average annual rate of change in start-up intensity in the 401 districts and independent cities dropped by 4.3 percent,” said Kay.

However, Kay said that 40 percent of districts have developed better than the average.

“Five districts even show a positive development over the whole period of time: the districts of Görlitz, Marburg-Biedenkopf and Teltow-Fläming and the cities of Leverkusen and Mülheim an der Ruhr,” said Kay.

“Why these districts saw a positive trend in start-up development is not clear, yet. Given the heterogeneity of the districts, no obvious explanation suggests itself. So, it poses one of many questions we are going to investigate in a follow-up project.”

READ MORE: The surprising parts of Germany where new businesses are blooming

With reporting by AFP