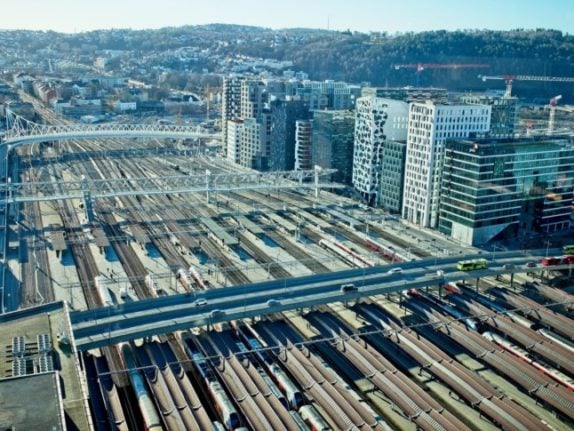 Oslo central station, pictured below, will soon see the return of trains running between the Norwegian capital and Gothenberg. Photo by Gunnar Ridderström on Unsplash

After an 18-month hiatus due to the pandemic, Vy’s train service between Oslo and Gothenburg make a return today.

“Now that both Norway and Sweden have reopened and the travel restrictions are limited, there are more people who can and want to travel by train across national borders,” Executive Vice President Erik Røhne said in an announcement on Vy’s website when the resumption was announced last week.

The train service had been paused due to the Covid pandemic since March 11th 2020. To begin with, there will be two daily trains running between the two cities, before returning to full service in December.

“From December 12th, we run full traffic, which is four departures each way on weekdays, and three on weekends,” Røhne said.

“Now we are very happy that the offer to Sweden opens in time for both family and friends trips and not least for Christmas shopping in Gothenburg. Just start planning and book the train ride,” he added.

Trains will depart from Oslo at 6:01am, and 2:01pm every weekday, and on weekends the morning service leaves the capital at 8:01am on Saturday, and 10:01am on Sundays. You can check out tickets for Oslo-bound departures here.

There are currently no entry restrictions on who can travel between Norway and Sweden. However, Norway still has some testing and quarantine requirements for some travellers from Sweden, which you can check out here.

Due to long waiting times, the public has been cautioned against making holiday plans without a valid Norwegian passport as travel documents may not arrive in time for the trip.

“We would strongly encourage people to wait to book a holiday abroad before they know that they have their travel documents in order,” Bjørn Vandvik from the Norwegian Police Directorate said in a statement on Wednesday.

Previously the police said that those travelling within the EEA this summer should instead order a national ID card which allows for travel within the Schengen area because that form of travel documentation was subject to shorter waiting times.

Those wishing to travel during fellesferie, the collective holiday period in Norway, have been advised to order new travel documents by the end of May or the beginning of June at the latest.

Despite the measures put in place by the police to try and ensure that supply meets demand, waiting lists are growing longer, and the authorities don’t expect the backlog to be cleared until the autumn.

The current waiting time for passports is around seven weeks. However, the police have said they expect this to increase to 10 weeks by July.

A mixture of the pandemic and war in Ukraine has made getting the materials used to produce national ID cards and passports more difficult.