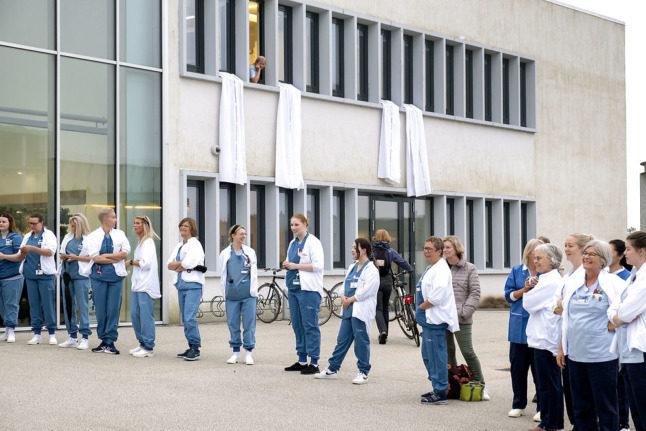 Parliament in August intervened to settle a dispute over a new collective bargaining agreement between the nurses’ trade union DSR and regional health authority employers, ending union-sanctioned strikes which had been ongoing throughout the summer.

Strikes authorised and announced by unions, when negotiations over new working conditions break down, are permitted and recognised as a legitimate part of Denmark’s labour model.

But nurses have continued to protest against the agreement by conducting unauthorised walkouts in September and October. That action remains ongoing despite the Arbejdsretten labour court issuing fines against nurses involved in it and DSR urging them to end the walkouts.

EXPLAINED: Why has the government intervened in Denmark’s nurses strike?

A committee has now been set down to scrutinise wage structures in Denmark’s public sector, offering a glimmer of hope of finding a way out of the deadlock.

Economics professor and former head of the Danish Economic Councils Torben M. Andersen will lead the commission, the Ministry of Employment said in a statement.

In June, nurses voted against accepting the collective bargaining agreement, arguing that wages for their profession are lagging behind pay levels in other fields.

It is that agreement that was later implemented via the government intervention.

The wages committee will analyse pay structures and the consequences of any changes to them. The results of the work are to be presented as soon as possible, although the final deadline is the end of 2022.

Minister for employment and equality Peter Hummelgaard welcomed the appointment of the committee and recognised that Denmark does not have wage equality.

“But we must also recognise that it’s a complex debate and we need to make an informed basis that can form the background to future collective bargaining negotiations in the public sector,” the minister said.

“This is important work which the government obliges itself to follow up on,” he added.

Several professional sectors in Denmark, including nurses, have pointed to a 1969 wage law as the culprit in leaving a lot of female-dominated professions lagging on pay.

The 1969 wage reform, tjenestemandsreformen,  placed public servants on 40 different pay grades, with sectors traditionally seen as dominated by women, such as nursing and childcare, given lower pay than jobs such as teacher or police officer.

A petition demand an end to the decades-old wage hierarchy failed in parliament earlier this year.

The advert where Santa Claus falls in love with Harry, both pictured above, has caused a stir on social media. Picture from screenshot Youtube/ Posten.

Posten’s Christmas advert titled “When Harry met Santa” — a nod to the 1989 rom-com “When Harry met Sally…” — has caused a splash since it premiered on social media before airing on Norwegian screens this week.

The new ad follows up on last year’s offering where Santa was angry at the postal service for taking away his “business”.

The nearly four-minute film sees Santa and Harry build up a bond over several years. However, the pair are restricted to fleeting encounters due to Santa’s packed schedule- until he enlists Posten to ease his workload so the two can spend more time together before sharing a kiss in the final scene.

The advert was made to mark next year’s 50th anniversary of same-sex relationships being decriminalised in the Scandinavian country.

“This year, it’s all about love – highlighting the fact that 2022 marks the 50th anniversary of the decriminalisation of homosexuality in Norway,” Posten said in a statement to newswire Reuters.

“In addition to showing the flexibility of our services, we want to put it in a socially relevant setting,” it said.

Mats Strandberg, who is married to Johan Ehn, the actor who plays Harry, tweeted, “That’s my husband kissing Santa!”.

Below you can watch the ad with English subtitles.