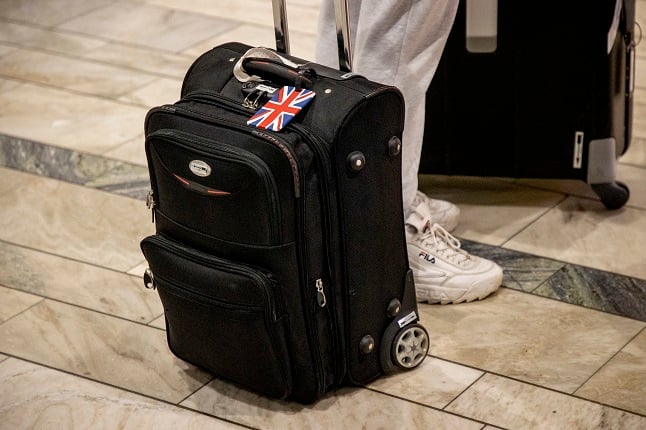 People who can present vaccination certificates from the UK are exempted from both the entry ban and the requirement for a negative test on arrival to Sweden, the government announced last week.

The entry ban has been in place since 2020, but did not affect UK residents until the end of that year, because it was treated as an EU/EEA country until the end of the post-Brexit transition period. Under the entry ban, people wishing to travel to Sweden from outside the EU/EEA needed to fall into an exempt category (such as travelling for urgent family reasons or being a Swedish resident) as well as providing a negative test.

The change is effective from October 11th.

“Sweden and the UK have close ties and a long history of cooperation in many important areas. Travel between Sweden and the UK is of major importance for both countries from a range of perspectives,” the government said in its statement, noting that people fully vaccinated in Sweden have been allowed into the UK for some time.

The UK is not the first country to have its vaccination certificates approved by Sweden. From late September, people people who can present a Covid-19 vaccination certificate issued in Albania, Andorra, the Faroe Islands, Israel, Morocco, Monaco or Panama were also exempted from the entry ban and negative test requirement.

Under current Swedish travel rules, entry from most non-EU countries is not permitted unless the traveller falls into one of several exempt categories. Those categories include all Swedish residents and EU citizens, as well as people travelling for urgent family reasons and certain business travel, as well as from a small number of non-EU countries considered as “safe”, for example.

As of October 4th, Bosnia and Herzegovina and Moldova have been removed from the “safe” list while Chile, Kuwait and Rwanda have been added to it, meaning that travellers from the latter three countries can enter Sweden by showing they are resident in one of these countries and presenting a negative Covid-19 test, without needing to fit into another exempt category.

The entry rules are currently in place until at least October 31st, but could be further extended.

This summer has seen the return of large-scale international travel after a couple of Covid-hit years that have not been a picnic for anyone.

While the end of restrictions came as a relief, severe delays and disruptions at airports have added a new uncertainty around travel in 2022.

Scandinavia has not been an exception to this, with strikes at Scandinavian airline SAS and delays at Copenhagen and other airports among the problems faced by the sector.

Additionally, the increasing price of airline tickets in a time when inflation is hitting living costs across the board has become another factor discouraging air travel.

Finally, there’s the impact of air travel on climate to be considered. So is there an alternative?

Unlike colleagues who have made long distance journeys from France and Sweden respectively by rail, our plan was to make the trip from our home in Denmark to the UK by car.

There are a few reasons we picked this less climate-friendly option. I’ll readily admit they were driven (no pun intended) by our own needs, and not those of the planet. I hope we can offset this by using the train more than the car for longer journeys within Denmark, where costs are competitive.

Once we decided not to take our usual Ryanair flight, we only really considered driving. This is primarily because we have a toddler (age two), and felt that on such a long journey, the ability to control the timing and length of our stops would be crucial.

Secondly, the route would have taken longer and been more difficult logistically by rail, and would also have cost more. For example, we arrived at Harwich International Port late on a weekday evening, from where onward travel was to rural Suffolk. The thought of doing this on multiple local rail (possibly bus) services with a tired two-year-old makes me shudder a bit.

From our home in central Denmark, we set out on a Monday morning and drove south on the E45 motorway, crossing the German border and continuing past Hamburg. We then got on to the A1 Autobahn and made for Bremen, where we stopped overnight.

Travelling non-stop, this journey takes just under four hours. It took us around five and a half. We stopped twice and were caught in traffic at Hamburg, where there is lot of construction going on around the city’s ring road.

Leaving early (just after 6am) the following day, we drove southwest and crossed the border into the Netherlands after a brief stop, but then managed to complete the journey to the port town Hook of Holland without a further break.

Our ferry from Hook of Holland to Harwich was due to leave at 2:15pm and check-in time was an hour before that. This was the only deadline we had on our journey that would have been problematic to miss, so we gave ourselves plenty of time for the drive from Bremen. We arrived in Hook of Holland at around 11:30am.

Next was a six-hour ferry crossing to the East Anglian coast. We booked a cabin – they are inexpensive on daytime crossings – which gave us a chance to relax after the drive and our daughter a comfortable spot for her afternoon nap.

After a queue at customs in Harwich which took around 45 minutes, we were driving through the Essex countryside just before 9pm local time. The final drive to our destination took an hour and a half.

It’s not the most relevant information for anyone considering a similar trip, but I have to mention our car. A 2003 VW Polo we bought two years ago that has never had any mechanical issues, I was nevertheless braced for possible problems given its age (and ensured I had roadside assistance for outside of Denmark, more detail on this below).

However, there was not so much as a hint of an issue of any kind at any point during the 900 kilometres it covered on the journey, nor on the way home. Respect.

Our plan to split the trip into two days paid off. I think you could do it in one day (there are also overnight ferries) if you shared the driving and needed less flexibility. I should also recognise here that we live relatively close to Germany and our destination was close to the east coast of the UK. If you were travelling, for example, from Copenhagen to Cardiff, you’d have significantly more driving to do.

For us, knowing we could take long breaks if we needed them took a lot of stress out of the journey and allowed us to adapt to our toddler’s needs – changing nappies, finding a service station playground or stopping for an ice cream.

Stopping overnight also gave us the chance to see some new places (we switched things up on the way back and stayed in Groningen in the north of the Netherlands, instead of Bremen) and gave us a feeling of being on our own little bonus holiday.

In all, things went as well as we possibly could have hoped for and our conclusion after we got back home was that we’d like to travel this way again.

We were stopped by traffic police in Groningen city centre because I failed to understand signs showing we were entering a public transport-only zone. The officers who stopped us then offered to escort us to our accommodation a few streets away.

The ferry, operated by Stena Lines, had far less to do on board than we’d imagined there would be on a six-hour voyage. Two tiny off-duty shops, a cinema showing a superhero film and a minuscule play area (which our daughter nevertheless enjoyed) were about the extent of it. We hadn’t downloaded any films ourselves or brought much entertainment with us from the car, so we got a bit bored during the crossing. This is hardly a serious gripe and an easy one to rectify on the return trip.

Roadside assistance is obviously crucial for a journey like this, and it’s also important to double check your insurance is valid once you leave the country in which your car is registered and insured – Denmark, in our case.

Foreign authorities can check your insurance is valid. You can document this with the International Motor Insurance or “Green” card, which serves as proof you have motor insurance when you drive outside of the EU (you don’t need it within the EU).

This means that (in theory) you can be asked to present it in the UK. We weren’t asked for it.

A number of Danish companies specialise in roadside assistance, including Falck and SOS Dansk Autohjælp. You can also include roadside assistance as part of your motor insurance package. We have the latter option, but in either case, I’d recommend calling your provider to make sure you are covered for breakdown in the EU and non-EU countries like the UK (if that’s where you’re going). Obviously, you should add such cover to your existing deal if you don’t have it, or change to a different deal.

The company which operates the ferry from Hook of Holland to Harwich is Stena Line. Both directions have daytime and overnight departures.

There is a range of prices, and I couldn’t cover all the options here if I tried. However, I’d recommend a cabin on the daytime departures, because it’s inexpensive and gives you a bit of personal space and privacy, which is useful with children.

After calculating what our approximate fuel costs would be, the price of the hotel stays and ferry tickets, we found that the trip cost around 1,500 kroner more than we would have paid to fly from Billund Airport to London Stansted with checked-in baggage with Ryanair on the same dates. In return, we could take as much luggage as we want with us (and back), we got to see Bremen and Groningen and had our own car with us in the UK. This was more than worth the additional expense.

I also spent 50 kroner on a “DK” sticker for the tailgate of the car (because the car is so old it predates the EU number plates that include the country code) and 70 kroner for some headlight stickers which prevent full beam headlamps from dazzling oncoming drivers when you are driving on the left in the UK.

As I busily fixed them onto my car as we waited to disembark the ferry, however, a lorry driver parked next to us said these were, in fact, entirely unnecessary.