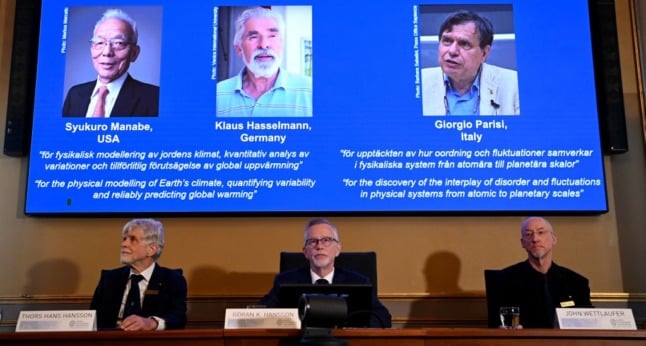 A screen shows the co-winners of the 2021 Nobel Prize in Physics, (L-R) Syukuro Manabe, Klaus Hasselmann and Giorgio Parisi, at the Royal Swedish Academy of Sciences in Stockholm on October 5th, 2021. Photo: Jonathan NACKSTRAND/AFP

Rome-born Parisi, 73, won the prize for his research on complex systems.

Parisi was spotlighted for his work in the 1980s that was said by the Nobel Committee to be “among the most important contributions” to the theory of complex systems.

His work made it possible for physicists to understand apparently entirely random materials, with wide-ranging applications including mathematics, biology, and machine learning.

He shared the prize with Syukuro Manabe of Japan and Germany’s Klaus Hasselmann.

The two researchers won for their work on climate models and global warming.

“I’m happy, I didn’t expect it, but I knew there might be a chance (of winning),” Parisi said via videolink with the Academy of Sciences in Stockholm.

Italy has now won 20 Nobels including 12 for science and two for women: Grazia Deledda for literature in 1926 and Rita Levi Montalcini for medicine 60 years later in 1986.

The prestigious honour is the second Nobel of the season after the medicine prize on Monday went to a US duo David Julius and Ardem Patapoutian for discoveries on receptors for temperature and touch.

The Nobel season continues on Wednesday with the award for chemistry, followed by the much-anticipated prizes for literature on Thursday and peace on Friday before the economics prize winds things up on Monday, October 11.

While the names of the Nobel laureates are kept secret until the last minute, the Nobel Foundation has already announced that the glittering prize ceremony and banquet held in Stockholm in December for the science and
literature laureates will not happen this year due to the pandemic.

Like last year, laureates will receive their awards in their home countries.