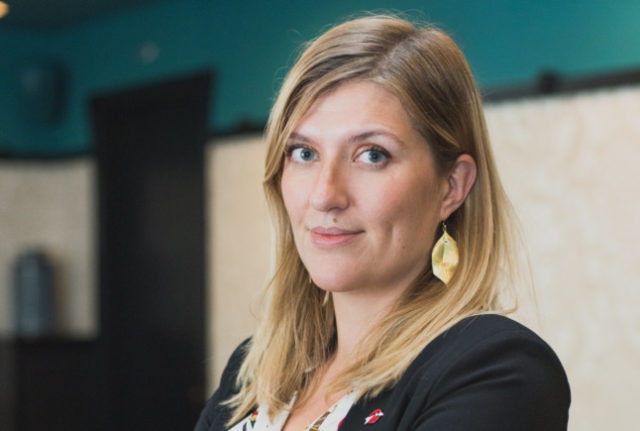 Here, Beatrice Fihn, Executive Director of the International Campaign to Abolish Nuclear Weapons (ICAN), tells The Local of her fears on both the nuclear threat – and the potential for social media to undermine democracy in a way that “a big radioactive bomb” simply cannot counter. Plus, Annelie Drakman, historian of ideas at Stockholm University, tells us how social media is influencing the impact of the Nobel Prize.

The power to build a progressive world

When Beatrice Fihn started an internship during her time studying International Relations at Stockholm University, she was disappointed to learn it would focus on nuclear weapons. “I thought it was super-boring at first,” she admits.

“I thought ‘Really? Do they still exist?’ It seemed like an old, Cold War problem. I cared about the climate, human rights, women’s rights, and I thought it was separate from that.”

She could never have imagined that less than a decade later in 2017, she’d be accepting the Nobel Peace Prize for her work with the International Campaign to Abolish Nuclear Weapons (ICAN). But that’s exactly what happened.

The internship, at the Women’s International League for Peace and Freedom in Geneva, allowed her to see the world in a new light – and set her on a path she continues to pursue with dedication today.

“When I started working on the issue, I realised it was a real, massive existential threat that we’ve forgotten to deal with,” Fihn recalls. “It’s a fundamental part of the power structures in the world.”

She has been ICAN’s Executive Director since 2013, working to mobilise civil society through the Treaty on the Prohibition of Nuclear Weapons. Four years after ICAN’s award, how does she view the Nobel Prize’s role in addressing the world’s big challenges?

Fihn praises the “aspiration to look at people and organisations who make a real contribution to taking the world forward”. A Nobel Prize can strengthen “fragile” progress being made on global issues through the use of international law, multilateralism and diplomacy, she says. Fihn sees this as particularly vital today amid concern that resurgent nationalism could derail co-operation on climate change, infectious diseases, and nuclear weapons.

“The consequences of these things are not going to stop at borders, so it really is everyone’s responsibility,” Fihn states. “We have to figure out a way to shape the behaviour of the powerful and constrain them.”

She praises the ability of the Norwegian Nobel Committee (which awards the Peace Prize) to “pick up on trends” and “lend a platform to actors who try to fight negative trends”.

Many people were puzzled when the European Union won the Nobel Peace Prize in 2012, Fihn says. “Fast-forward a few years, and the UK is leaving the EU and there’s tension between European countries and nationalistic tendencies,” she adds.

Discover all the programmes at Stockholm University, including International Relations and many more at Bachelor’s and Master’s level

The future of the Nobel Prizes

All of this, along with the information overload we all face, makes the Nobel Prize more relevant than ever, she believes. “Today anyone can publish anything,” she says. “I think there’s still a need for something that looks deeper into the issues and isn’t about who gets the most clicks and engagement on social media.

“The issue of nuclear weapons is very under-reported in the media. The Nobel Prize has that potential to lift up things that might have been missed otherwise. Not everything has to be in a Tweet format.”

Indeed, while she herself didn’t appreciate the importance of the nuclear issue in her younger years, she now warns: “If we’re going to have them forever, they’re going to be used. Yet Russia today can destablise the US with some Facebook accounts. That’s the future of warfare we’re seeing, manipulating opinions and destabilising our trust in democracy and institutions. A big radioactive bomb isn’t fighting that.”

So what progress is ICAN, a coalition of non-governmental organisations in over 100 countries, making? There are now 86 signatories to the treaty and 56 countries that have ratified it.

“We’ve utilised the Nobel Prize to build a stronger movement against nuclear weapons,” she says. “Of course, a Nobel Peace Prize isn’t going to convince Putin or Trump or Kim Jong-Un to get rid of their nuclear weapons. But we’re working with the treaty to remove their status and make this shameful, like chemical or biological weapons. Without the strong movement we now have, we would be in a much more dangerous situation.”

A history of controversy

When Alfred Nobel’s will was opened and read following his death in 1896, it was soon at the centre of international controversy. His family actually opposed the establishment of the Nobel Prize, while those he wanted to award the prizes refused to do exactly as he had requested. The first Nobel Prizes were only awarded in 1901.

So while Alfred Nobel’s legacy cannot be doubted, the prizes that bear his name have always been subject to interpretation and evolution, says Annelie Drakman, a historian of ideas at Stockholm University’s Department of Culture and Aesthetics.

“When Alfred Nobel was writing his will, the common structure would be for a national academy itself to instigate a prize like this,” she says. “The Royal Swedish Academy of Sciences and the French Academy already had awards. What made this unique was its international character, the huge amount of money and also the diversity of the categories – bridging between areas that hadn’t been brought together before, such as literature and medicine, for instance.”

One important element of his will that was disregarded was Nobel’s desire to reward work done only in the preceding year. According to Drakman, it appears that he intended to “give money to promising scientists who did good things in the past year”.

She adds: “It would be a very different prize if you gave it on the basis of potential rather than accomplishment. Peter Higgs [known for the so-called ‘God particle’] was awarded the Nobel Prize in Physics almost 50 years after his theory.”

Drakman believes the decision to often award “people who had had illustrious careers” late in their lives is justified. But the prizes still reflect the values of a particular society at a particular time, she says. “There have been instances of things awarded that we don’t agree with today, like the Nobel Prize in Physiology given for introducing lobotomy in 1949,” says Drakman. “Whatever is awarded reflects the problems that society wants to solve.” “The Nobel Prizes have been around for 120 years and they managed to award most of the big names of the 20th century, with some omissions like Gandhi,” continues Drakman.

But looking at the distinct challenges of the early 21st century, how is the Nobel Prize faring now? “The scale of its impact is unprecedented – it has never been bigger than now because of the breakthrough of social media,” she says. “The Nobel Prizes have such global visibility compared to similar prizes that lack its name recognition, so it can really reach into all corners of the world.”

She says the websites that promote knowledge of the awards get more visits from China and India than anywhere else. “Universities also use Nobel Prize awards as a metric to compare their own excellence and success against other universities,” she says. “So too do countries.”

Does all this mean that Alfred Nobel’s vision will continue to be honoured with awards that can help us tackle humanity’s most vital challenges? Can the Nobel Prize really help us save the world? “It could, of course,” says Drakman. “It’s going to help shape the direction that human activity takes within these fields. With the Nobel Prize comes a lot of attention and support.”

And as Beatrice Fihn and ICAN can tell you, such attention and support builds momentum for change.

Interested in international relations, history or studying any of Stockholm University’s many other programmes in English? Find out more now