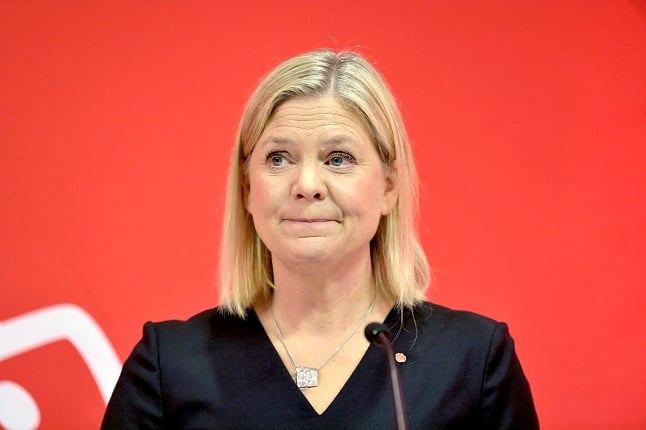 “This will be historic. Magdalena is the person who knows how things are, says it as it is and does what is needed,” said the nomination committee’s chairperson, Elvy Söderström.

Describing the Finance Minister’s strengths, Söderström told the TT newswire: “She has an eagerness to do something. At the same time, she stands firm and is competent in economics and well-known internationally, all those qualities are just some of those I could mention.”

Andersson has been Minister of Finance since 2014 and has been the hot favourite to replace current party leader Stefan Löfven, who announced his plans to step down back in August. She has had her current job during all three Löfven governments, and previously held several high-ranking posts both in the Finance Ministry as well as being senior director at the Swedish Tax Agency.

Asked on Wednesday how long she had wanted to be leader, Andersson said: “This has never been something I have dreamed of. I want to make a difference and to me it does not matter in which role I do that.”

She also described herself as “very honoured” to receive the nomination.

The new party leader will be elected by the Social Democrats’ congress in early November after Löfven formally steps down.

After her likely election as party leader, Andersson will not automatically replace her predecessor as Prime Minister.

Löfven will need to ask the speaker of parliament to be dismissed from this role, and Andersson would need to pass a parliamentary vote in order to become Sweden’s next leader.

Sweden has a general election scheduled for September 2022, and the Social Democrats will be hoping for an improvement on their 2018 result, their worst in around a century.

But before then, Andersson faces another challenge: getting the government’s budget, which was presented last week, passed by parliament. The government may be at a disadvantage since the Liberal Party left the four-party agreement that allowed previous government budgets to be passed. In order to avoid a majority of MPs voting against it, the most likely path is for the government to win the support of both the Centre and Left parties.