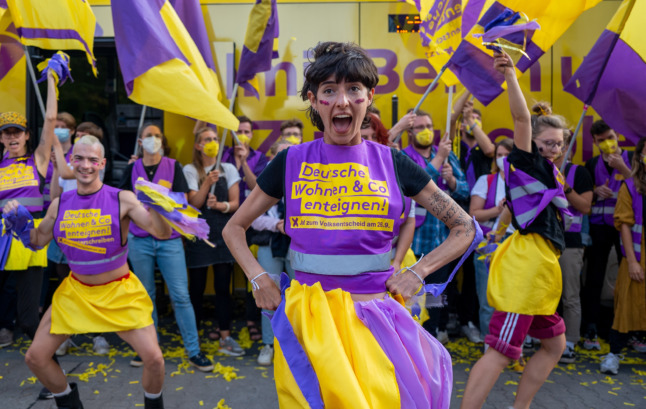 After a local campaign dominated by discussions on housing and rising rents, it briefly looked as if Berlin’s Social Democrats might have lost the Mayor’s office for the first time since 2001. An early exit poll put Bettina Jarasch’s Greens ahead of Franziska Giffey’s SPD in the elections for Berlin’s state parliament—or Abgeordnetenhaus.

Had it stayed that way, it would have been historic—with Greens taking the top spot in Berlin’s regional parliament for the first time ever. The Green jubilation followed a closely fought race that saw Jarasch get within a percentage point of Giffey in opinion polls conducted in the weeks up to the final vote.

But the Green celebration was not to last. As the night went on, Giffey pulled ahead, finishing with 21.4 percent of the vote to 18.9 percent for Jarasch’s Greens and 18.1 percent for Kai Wegner’s Berlin Christian Democrats (CDU). As state Parliament’s results came in, “Deutsche Wohnen & Co Enteignen” – a referendum initiative to expropriate large corporate landlords in Berlin – won with just over 56 percent of the vote.

Even with the SPD keeping the Mayor’s office — a post the party has held for the vast majority of Berlin’s post-war history — what happens next in the capital is anything but clear.

Giffey’s SPD has several coalition options that are theoretically possible, but a lot depends on what Jarasch’s Greens are willing to sign up for. Giffey could continue with the current left-wing “R2G” coalition with her SPD, the Greens, and the Left Party, or she could try and opt for a more conservative “Germany” coalition involving her SPD, the FDP, and the CDU.

While the SPD theoretically could also join up with the Greens to govern with either the CDU or FDP in a “Kenya” or “traffic light” coalition respectively, Berlin’s Greens tack further to the left than their more centrist national colleagues. During the campaign, Jarasch made clear that she wanted to keep working the with Left and SPD, but under Green leadership.

“We’ve started a lot of things in this coalition that people think are good,” she said in an interview with Phoenix. “That’s why I’ve said from the start that I would like to continue with this progressive coalition.”

She also announced she herself would vote “yes” in the “Enteignung” referendum, as a way to put pressure on housing developers to enter a pact that would lock in rents in existing buildings in return for incentives to build newer developments. The Left Party similarly encouraged its supporters to vote “yes” in the referendum.

By contrast, Giffey came out against Enteignung early in the campaign, tweeting: “It will not create a single apartment and we’ll need to spend millions for it, money we urgently need to build more homes.” That position is in line with both the Berlin CDU and FDP rather than the capital’s other progressive parties.

Analysts have previously called Giffey a “conservative” Social Democrat. Over the last few months, speculation was rife that Giffey preferred an end to the left-wing R2G in favour of a coalition involving the more conservative CDU and FDP. In an interview with Der Tagesspiegel three weeks before the vote, Berlin Green Co-Chair Werner Graf attacked Giffey, saying: “Whoever votes for Giffey will wake up with the CDU and FDP in government.”

In an interview with rbb the morning after the vote, Giffey appeared to keep her options open. “The people gave their vote to the SPD and also the Greens, but it must also be said that the CDU landed almost on par with the Greens,” she told the broadcaster. Enteignung’s victory may, however, make an R2G coalition more likely. Although she is personally against it, she has now pledged to respect the referendum result. That will complicate any negotiations she now has with the CDU and FDP, both of which place a higher emphasis on building more homes as the way to ease rising rents — as opposed to expropriation or the rent controls Berlin’s progressive parties introduced in 2019 — before the Federal Constitutional Court struck them down, saying only the Bundestag had the authority to introduce such controls at a national level.

“The SPD was very clear that our big emphasis was on building new housing. That’s absolutely the right way to go, because the only way to take pressure off the rental market is to build new houses,” Kreuzberg SPD candidate Niklas Kossow tells The Local.

The SPD’s Berlin manifesto echoes the CDU’s by providing a target of 20,000 new homes every year. The Green platform, by contrast, doesn’t provide the same explicit target, opting instead to say that rent controls should be introduced at a national level and that more new housing should use sustainable materials.

“I don’t think though, that there are any crucial differences where you couldn’t negotiate an agreement,” says Kossow about a possible deal between the SPD, Greens, and a third party. “There is a chance that there will be a different coalition,” he says, while also saying that an R2G continuation is more likely. “There is progressive momentum in Berlin and we want to use that.”

Aaron Burnett is a German-Canadian journalist specialising in German, European, and Canadian politics.