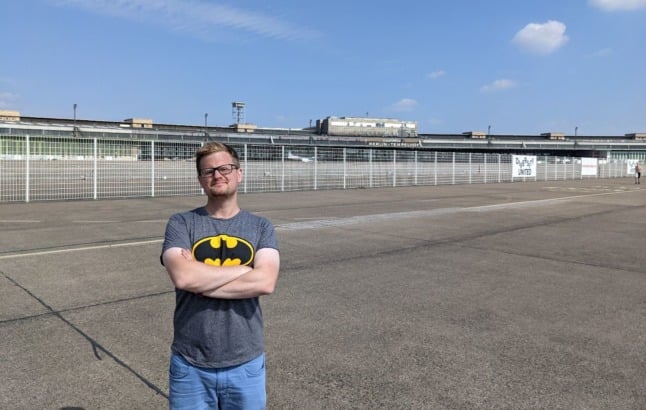 Chris Ward at one of his favourite Berlin spots - Tempelhofer Feld. Photo courtesy of Chris Ward.

Chris Ward is no stranger to politics: he was a councillor in a town near London before moving to Germany.

But the 37-year-old software developer never believed he would be getting involved in German politics, not least because he couldn’t speak the language when he first arrived.

“In the last six months I’ve learned more German than I did in the entire four years I’ve been here,” Ward tells The Local.

He is standing for election in this Sunday’s Bezirksverordnetenversammlung (BVV or district assemblies) – in Tempelhof-Schöneberg with the Liberale Demokraten party. Berlin is also hosting state elections and a referendum on housing on the same day, while a federal election is also happening throughout Germany.

READ ALSO: Everything you need to know about Berlin’s super election day

On the left is a guy four years ago today barely holding his life together at the airport ready to fly to his new home in Berlin not being able to speak a word of German.

On the right is someone standing in a German election this month.

Ward’s journey to this moment is remarkable. He says that being diagnosed with ADHD, a condition that affects behaviour, and receiving medication for it, changed his life.

“In December 2019 I had a bit of an unfortunate suicidal episode and ended up in hospital with it,” he says. “I’d been medicated with depression and anxiety for a number of years and still something just wasn’t working.

“A friend of mind told me he had ADHD. Reading the symptom list was a eureka moment. What I needed then was a diagnosis.”

One of the reasons he is standing for election in Berlin is because of “how dreadful mental health provisions are”.

“Trying to get a psychiatrist in Berlin is like trying to get blood out of a stone,” he says. “I’ve heard some horrific stories from other people. You’ve got a raffle on whether you get told to drink tea. A friend told me one doctor told him ADHD isn’t a thing.

“The line I use in the campaign is that it’s easier to get medication for your mental health at Görlitzer Park (a notorious drug dealing spot) than it is from your doctor.

“You shouldn’t be going to your doctor and they say: have you tried drinking tea?”

After a few hurdles, Ward managed to finally get diagnosed and was prescribed medication. It was a major turning point. “I could suddenly function as a human being, I could learn easier,” he said. “Once the drugs started working I realised I could do things that I previously couldn’t.”

Ward decided to get involved in politics again because he missed it – and wanted to improve his German language skills.

He’s used apps and works with flashcards to get better language skills. But being in situations where you have to speak German is one of the best ways to learn.

“Putting yourself up for election – you have to start being able to interact with people so that’s helped too,” said Ward. “Standing for election in order to learn German is probably the most ADHD thing I’ve ever done,” he says while laughing.

After the Brexit referendum happened in 2016, Ward felt disillusioned and ready to start a new life abroad with his partner – now husband – Josh.

The couple had a few places in mind, but eventually settled on Berlin. Ward also has a connection with Germany – he was born there and moved to the UK when he was seven.

In many cases, foreigners living in Germany can’t stand for election. Britons were also stripped of their right to stand and vote in the district assemblies after Brexit because only EU citizens have that right. Meanwhile, only German citizens can vote in state and federal elections.

Ward is able to run in the district councils because he also has Irish citizenship. He’s in favour of more voting rights for non-German residents. More than 20 percent of the Berlin population was born outside Germany.

As a passionate believer in local politics, Ward has been knocking doors and talking to constituents.

Councillors are very visible in British communities – and that’s something that doesn’t seem to be as common in Germany. Doing this makes Ward feel more connected with the city.

“The moment you start getting down to a granular level on the streets, you do feel much more of a connection,” he says. “That’s why it’s so important that councillors do that. If you only look through your eyes and your ears you’re only viewing things through your own privilege, your own narrow views. So absolutely speaking to people is probably the most important thing you’ll ever do in politics.”

Ward wants to make a difference and help the most vulnerable people. But if his party doesn’t secure enough votes on Sunday for him to be elected, he’ll still continue to do his bit and try to grow the small party.

He will be out talking to voters on Saturday but he’s looking forward to a more relaxed Sunday – a stark comparison to the British style of frantically campaigning until the voting booths close.

“Saturday is a big campaign day,” he says. “I’ll be trying to speak to people individually. On Sunday I might go and sit in a square somewhere with a sign. I like the German way, it’s a lot more civilised. Finishing at 6, having a drink and going home.”

Germany's next Chancellor Olaf Scholz (front, left) on stage in Berlin with other members of the new coalition government, and their signed agreement. Photo: picture alliance/dpa | Michael Kappeler

The move marks the final stage of a 10-week week process that saw the three unlikely bedfellows forming a first-of-its-kind partnership in German federal government.

The SPD’s Olaf Scholz is now due to be elected Chancellor of Germany on Wednesday and his newly finalised cabinet will be sworn in on the same day. This will mark the end of the 16-year Angela Merkel era following the veteran leader’s decision to retire from politics this year.

Speaking at the ceremony in Berlin on Tuesday morning, Scholz declared it “a morning when we set out for a new government.”

He praised the speed at which the three parties had concluded their talks and said the fight against the Covid crisis would first require the full strength of the new coalition.

Green Party co-leader Robert Habeck, who is set to head up a newly formed environment and energy ministry, said the goal was “a government for the people of Germany”.

He stressed that the new government would face the joint challenge of bringing climate neutrality and prosperity together in Europe’s largest industrial nation and the world’s fourth largest economy.

FDP leader Christian Lindner, who managed to secure the coveted role of Finance Minister in the talks, declared that now was the “time for action”.

“We are not under any illusions,” he told people gathered at the ceremony. “These are great challenges we face.”

Scholz, Habeck and Lindner are scheduled to hold  a press conference before midday to answer questions on the goals of the new government.

Breaking: the SPD, Greens and FDP have just signed a coalition agreement at a public ceremony in Berlin.

Olaf Scholz will become the new Chancellor in 24 hours. “Dare to make more progress” is the slogan of the three party coalition. pic.twitter.com/C9bv37aAym

Together with the Greens and the FDP, Scholz’s SPD managed in a far shorter time than expected to forge a coalition that aspires to make Germany greener and fairer.

The Greens became the last of the three parties to agree on the contents of the 177-page coalition agreement an in internal vote on Monday, following approval from the SPD and FDP’s inner ranks over the weekend.

“I want the 20s to be a time of new beginnings,” Scholz told Die Zeit weekly, declaring an ambition to push forward “the biggest industrial modernisation which will be capable of stopping climate change caused by mankind”.

Putting equality rhetoric into practice, he unveiled the country’s first gender-balanced cabinet on Monday, with women in key security portfolios.

“That corresponds to the society we live in – half of the power belongs to women,” said Scholz, who describes himself as a “feminist”.

The centre-left’s return to power in Europe’s biggest economy could shift the balance on a continent still reeling from Brexit and with the other major player, France, heading into presidential elections in 2022.

But even before it took office, Scholz’s “traffic-light” coalition – named after the three parties’ colours – was already given a baptism of fire in the form of a fierce fourth wave of the coronavirus pandemic.

Balancing act
Dubbed “the discreet” by left-leaning daily TAZ, Scholz, 63, is often described as austere or robotic.
But he also has a reputation for being a meticulous workhorse.
An experienced hand in government, Scholz was labour minister in Merkel’s first coalition from 2007 to 2009 before taking over as vice chancellor and finance minister in 2015.
Yet his three-party-alliance is the first such mix at the federal level, as the FDP is not a natural partner for the SPD or the Greens.

Keeping the trio together will require a delicate balancing act taking into account the FDP’s business-friendly leanings, the SPD’s social equality instincts and the Greens’ demands for sustainability.

Under their coalition deal, the parties have agreed to secure Germany’s path to carbon neutrality, including through huge investments in sustainable energy.

They also aim to return to a constitutional no-new-debt rule – suspended during the pandemic – by 2023. Incoming foreign minister Annalena Baerbock of the Greens has vowed to put human rights at the centre of German diplomacy.

She has signalled a more assertive stance towards authoritarian regimes like China and Russia after the commerce-driven pragmatism of Merkel’s 16 years in power.

Nevertheless she is still so popular at home that she would probably have won a fifth term had she sought one.

The veteran politician is also widely admired abroad for her steady hand guiding Germany through a myriad of crises.