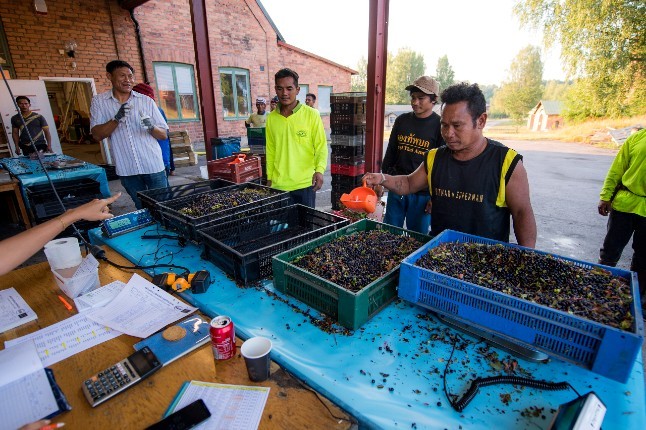 People from Thailand will probably not be able to come and pick berries in Sweden if the proposal becomes law. Photo: TT

Magdalena Andersson, the favourite to take over as party leader at the party’s conference at the start of November, said at a press conference that it was “completely unreasonable” for Sweden to currently be importing thousands of unskilled workers for the hotel and restaurant sectors, when so many in the sector were temporarily laid off due to the coronavirus crisis.

“Why is that? You have to suspect that it’s because those who are coming in to work aren’t going be working in great conditions, and that the employers want workers who are completely dependent on them,” she said.

With the proposal, the party is effectively calling to bring back the arbetsmarknadsprövningen or “labour market test”, which companies needed to meet to recruit workers internationally until it was abolished by the government of Fredrik Reinfeldt in 2007. Currently, in order to receive a work permit the requirements are to have an offer of a job in Sweden, which must have been advertised in Sweden and the EU and must offer a salary of at least 13,000 kronor monthly and in line with either collective agreements or the standard for the industry.

In Fördelningspolitik för jämlikhet och rättvisa, or “Redistributive policy for equality and justice”, a policy paper released in May, Andersson and five other prominent Social Democrats pointed out that only about half of the 21,000 people who received work permits in 2019 were highly skilled workers, with the rest in jobs requiring no or few qualifications such as carpenters, cooks, care assistants, caretakers, and berry pickers.

“If the labour market tests shows that there is not enough labour in Sweden, then it should be possible to have labour migration,” Andersson said at the press conference. “There are 200,000 people in Sweden who are long-term unemployed, so there’s a resource to draw on.”

The party also wants all those who receive work permits to be employed under union-agreed wage agreements, and to be given full-time jobs, whereas currently part-time work is also acceptable.

The proposals are part of a long list of new policies around work and unemployment which will be voted on by members at November’s party congress in Gothenburg, before becoming part of the party’s manifesto in the run-up to next year’s general election.

This means there is a long way to go before they could become reality, but it does signal a shift in Social Democrat labour policy.

Rafiqul Islam, who leads the Work Permit Holders’ Association, which represents those living in Sweden on work permits, warned that the new policies, if they became law, risked making life even more difficult, both for those wanting to come to Sweden and for those already living in the country.

“Many people who come to Sweden, who don’t yet speak English, enter the job market through these kinds of industries, and they might now find if they get a new job they will not get their work permit renewed,” he said.

He said it was also rare for labour migrants with few qualifications to to be given full-time jobs on arrival in Sweden.

“That’s also a big problem, because in my experience, very few companies offer full-time work in the beginning.”

In its package of labour market proposals, the party also proposed toughening regulation of jobs in the so-called ‘gig economy’, allowing people to offset more of the cost of unemployment insurance against tax, and making Swedish lessons compulsory for those with poor language skills who are receiving unemployment benefit.

He was hoping to avoid Ankara vetoing their requests to join the trans-Atlantic defence pact.

Turkey warned Wednesday that the NATO accession process for Sweden and Finland would not move forward unless they addressed Ankara’s security concerns, a reference to their supposed sympathy toward Kurdish militant groups.

“The president underscored the need to respect the sovereign choice of these two countries, which emerged from a democratic process and in reaction to the changes in their security environment,” Macron’s office said after a telephone call with Erdogan.

“He said he hoped the discussions would continue to find a solution quickly,” his office added.

But Turkey, a NATO member, is throwing a spanner in the works as any membership must be unanimously approved by all alliance members.

Ankara accuses Stockholm in particular of providing a haven for the outlawed Kurdistan Workers’ Party (PKK), listed as a terror group by Turkey and its Western allies.

Such an incursion risks creating new tensions between Ankara and other NATO members, with the US warning this week that its soldiers could be put in jeopardy.

During the call between Erdogan and Macron, the two leaders agreed to continue efforts to restart Ukraine grain exports now that Russian forces control most of the country’s ports, in order to avoid food shortages that threaten several developing countries.

But the Kremlin denied Monday any blame for the halted grain deliveries, and accused Western countries of preventing cargo vessels from leaving Ukrainian ports.