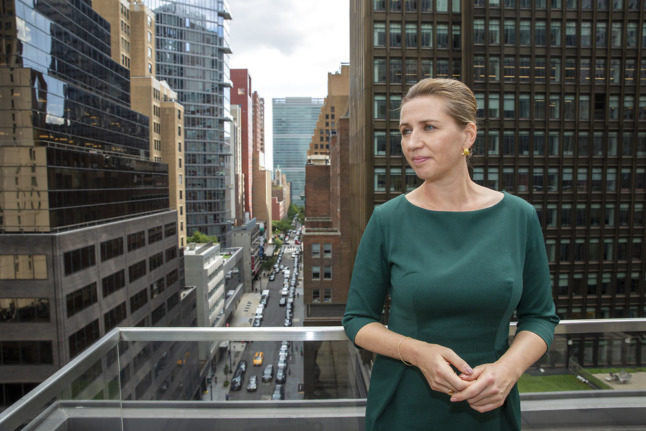 Frederiksen defended US President Joe Biden as “very loyal” to Europe even though the United States and Australia stripped European Union member France of a submarine contract.

Copenhagen’s stance contrasted with the tone in Tuesday’s meeting in Brussels, where most European diplomats expressed solidarity with Paris even if several warned against a rift with Washington.

“I think it’s important to say — given the talks going on in Europe right now — that I see Biden as very loyal to the transatlantic alliance,” Frederiksen said in an interview with Danish daily Politiken from New York.

“And in general, we should not turn concrete challenges, which will always exist between allies, into something they should not be. I would very much warn against this,” she added.

“That doesn’t mean that we in the Danish government necessarily agree with the US on everything, and we also said that we would have liked to see a different exit from Afghanistan, but I feel absolutely no frustration with the new US administration.”

Denmark has long been a loyal US ally. It sent troops to Iraq and Afghanistan, and regularly prioritises its NATO commitments over Europe on defence issues.

“There is no doubt that Joe Biden is distancing the US’ foreign policy from a very isolationist position,” she said, alluding to the America First policies of Biden’s predecessor Donald Trump.

Washington was moving “to once again take on the role of world leadership, a role only the United States can take on,” Frederiksen added.

“And if the United States doesn’t do it, no one else can take their place,” she said.

Denmark's government said on Tuesday it could not recover text messages requested by an official commission in relation to an ongoing inquiry. The timing, hours after local elections, was strongly criticised by opposition lawmakers. Photo: Mads Claus Rasmussen/Ritzau Scanpix

As such, an official inquiry currently scrutinising the decision last year to cull millions of fur farm mink will not have insight into key government communication relating to the controversial decision.

The PM has faced questions over a policy to automatically delete texts after 30 days, a practice not universally applied across government ministries.

“It has only been possible for police technicians to recreate a limited amount of SMS messages from the devices of justice ministry heads of department,” justice minister Nick Hækkerup said in the statement.

The timing of the announcement, less than 24 hours after local elections, drew immediate criticism from opposition parties.

The Ministry of Justice received the material needed for analysis of the devices on Friday last week, news wire Ritzau reports.

Justice spokesperson Morten Dahlin of the opposition Liberal party said it was “easy to assume” that the government held back the announcement to avoid a negative impact for the Social Democrats in local elections.

“It’s foul play not to go public with this information when it was received, but instead choose to keep it back. And you can only speculate about whether this is because the information wasn’t allowed to come out before the municipal elections,” Dahlin said.

The Liberal representative stressed that his party has “no confidence” in the government’s response to the controversy over the mink texts.

Hækkerup rejected the suggestion by the Liberals that the government had deliberately withheld information until after the election.

The minister’s comment was in turn rejected by his opposition counterpart.

“The explanation that the information was stored in sealed envelopes, which were coincidentally not opened before the municipal elections, is ridiculous,” Dahlin said.