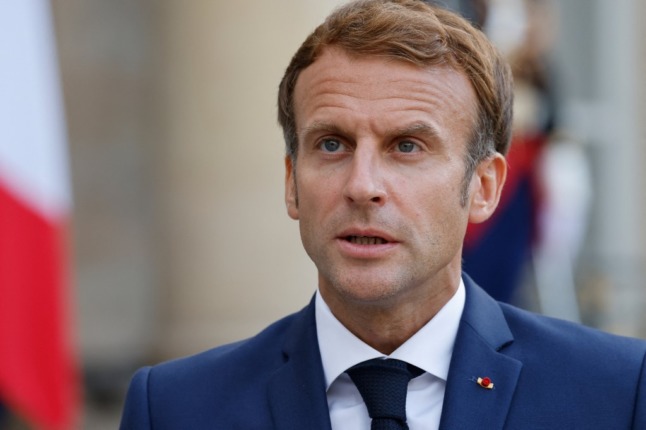 The court handed down a fine of €10,000 to Michel-Ange Flori, a former advertising executive, who had posted an image of Macron looking like the German dictator on a billboard in southern France.

France scrapped a ban on “offence to the president” in 2013 but, like any other citizen, the head of state is protected by a law against “public insult”, though such cases rarely go to trial.

Following a complaint from Macron’s LREM party, prosecutor Laurent Robert argued in court that Flori had shown “an obvious willingness to do harm”.

On one poster put up in July – only days after the government announced plans to introduce a Covid “health pass” – Macron was depicted as wearing a Nazi uniform and a Hitler moustache with a caption reading: “Obey. Get vaccinated.”

A month later, when an investigation of the poster was underway, Flori put up another one, this time depicting Macron with French wartime leader Philippe Petain, and wearing the same trademark cap.

Flori argued in court that he had a “right to use humour” and said he would appeal Friday’s verdict.

“The president, who is always so quick to defend freedom of expression, believes that it does not extend to his own august person,” said Flori’s lawyer, Beranger Tourne.

Tourne acknowledged that while his client may have been “irreverent, vulgar and rabble-rousing”, that made him “in no way guilty” of the charges.

He said the posters had to be seen in the context of a “polemical and political debate” over the health pass, which proves vaccination or inoculation against the virus to enter restaurants and other public places, or a recent negative test.

Around 20 people turned up outside the courthouse in support of the defendant, carrying placards saying “I am Flori”.

Flori, who used to own 600 outdoor advertising spaces in southern French cities, has held on to two of them that he uses for personal messages, including his support for health workers, or for France’s national football team.

Flori has previous convictions, including for violence against a person of authority, and for theft.

Initial investigations indicated that he planned to carry out a terror attack “in the name of IS, to which he had pledged allegiance,” said the source, who asked not to be named, adding that the man had been detained in the Drome region of southeast France and charged in Paris.

The source added that the man had been detained in the Drome region of southeast France and charged in Paris.

The man, from a Muslim family, had adopted extremist views and was considered a threat, sparking France’s anti-terror prosecutors office (PNAT) to open an investigation on May 19, a source close to the case said.

Police arrested him on Friday and a video of him swearing allegiance to IS was found in his possession.

The source did not say whom he was planning to target in the attack or in which location.

France saw a wave of jihadist attacks from 2015 that left hundreds dead and pushed the country to its highest level of security alert.

There has been no repeat of a mass atrocity in the last years, but there have been several deadly attacks carried out by lone individuals