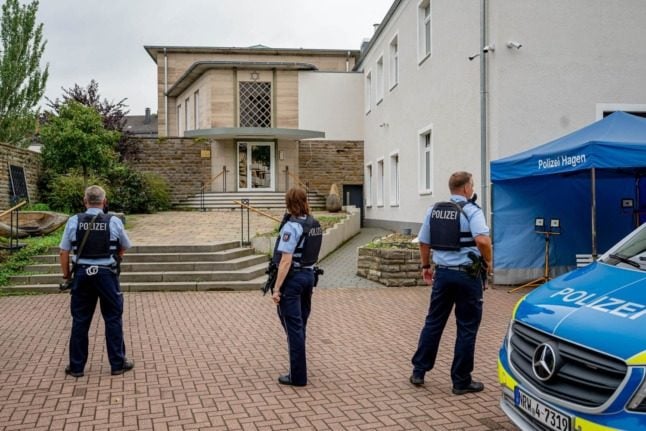 The case revived memories of an attack two years ago outside a synagogue in the eastern German city of Halle, when a neo-Nazi gunman sought to storm the
Jewish temple while worshippers were inside marking Yom Kippur.

There was a huge police deployment late Wednesday at the synagogue in the western city of Hagen, which was forced to cancel an event over the threat.

A 16-year-old Syrian was among four people detained Thursday over the case.

“It appears that prior to today on Yom Kippur, a Islamist motivated attack was averted,” said Armin Laschet, the state premier of Germany’s most populous region North Rhine-Westphalia, where Hagen is located.

“We will do everything we can to clarify which networks may have been behind” the plot, added Laschet, who is also running to succeed Chancellor Angela Merkel as Germany’s leader.

The region’s interior minister Herbert Reul added that officials had “concrete” details about the plot.

Investigators were still searching sites in the city, said police.

Both Spiegel weekly and Bild daily had reported without quoting sources that a foreign intelligence service had passed on a tip that a 16-year-old Syrian was planning an explosives attack on a synagogue.

In the 2019 attack, a bolted door at the synagogue was the only thing that prevented the assailant from carrying out the bloodbath.

After failing to gain entry, he shot dead a female passer-by and a man at a kebab shop.

The gunman, Stephan Balliet, was sentenced to life in prison in 2020 over the assault that nearly became the country’s worst anti-Semitic atrocity since World War II.

Anti-Semitic crimes have risen steadily in Germany in recent years, with 2,032 offences recorded in 2019, up 13 percent on the previous year.

They have sparked soul-searching in Germany, which has placed a huge emphasis on atoning for the murder of six million European Jews by Adolf Hitler’s Nazi regime during World War II.

The arrival in parliament of the far-right AfD, whose leaders openly question Germany’s culture of historical remembrance, has contributed to the change in atmosphere.

The influx of more than a million asylum seekers, many from Muslim countries such as Syria, Afghanistan or Iraq, has also played a role in growing hostility against Jews in recent years.

In an assault that sparked revulsion in Germany, a Syrian migrant was charged for lashing out with a belt in April 2018 at an Israeli man wearing a Jewish kippa skullcap.

Islamists have committed several violent attacks in Germany in recent years, the deadliest being a truck rampage at a Berlin Christmas market in December 2016 that killed 12 people.

The Tunisian attacker, a failed asylum seeker, was a supporter of the Islamic State jihadist group.

More recently, one man was killed and another seriously injured in an Islamist knife attack in the city of Dresden last October. A 21-year-old Syrian man with a known Islamist background was convicted in May over the homophobic attack.

The number of Islamists considered dangerous in Germany rose sharply between 2015 and 2018, according to security services.

But numbers have declined since then, with just 615 considered dangerous by the latest count – compared with 730 in January 2018.

At the same time, Germany was also battling a wave of far-right violence.

The number of crimes committed by right-wing extremists in post-war Germany jumped to its highest level ever recorded in 2020, according to official
figures in May.

Police recorded 23,604 crimes of a far-right nature last year, a jump of over five percent on the previous year, and the highest figure since records began in  .

Seehofer has called right-wing extremism the “biggest threat” to Germany.