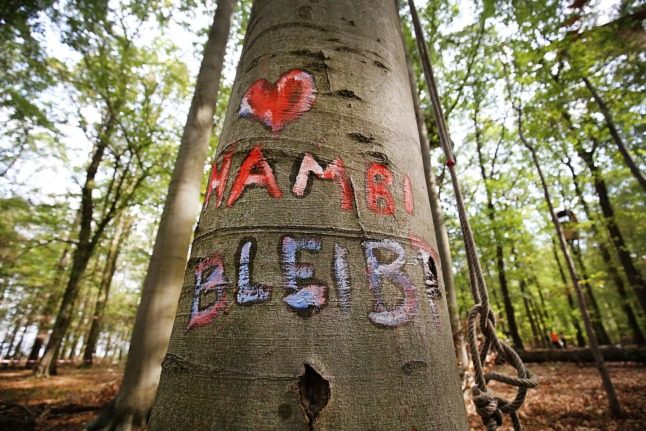 Archive photo from 2018 shows a tree with 'Hambi remains' written on it in Hambach Forest. Photo: picture alliance/dpa | Oliver Berg

The ruling could deal another blow to Armin Laschet, regional leader of North Rhine-Westphalia where the eviction took place, who as the conservatives’ candidate to succeed Chancellor Angela Merkel is lagging in the polls ahead of the September 26th election.

Judges at the court in the western city of Cologne found in favour of an activist who had sued local authorities.

The regional construction ministry stood accused of having ordered the eviction based on the “pretext” that the activists’ treehouses “violated fire protection building regulations”.

The aim was the “to suppress opponents of lignite”, the coal used to produce electricity, the judges said.

The Hambach forest near Cologne had been occupied by activists for years in what had come to symbolise resistance against brown coal mining in Germany, a country that despite its green reputation remains heavily reliant on this fossil fuel.

READ ALSO: ‘We were never given the time to mourn’: Activists continue fight for Hambach Forest

In September 2018, police evicted dozens of activists who had been living in treehouses to try and block energy giant RWE from razing part of the
ancient forest and expanding a giant open-pit mine.

It took nearly three weeks to carry out the evictions, with some activists throwing Molotov cocktails and stones, as well as bags of urine and faeces.

Tragedy struck when a freelance journalist covering the events died after falling through a walkway between two treehouses.

“With the illegal clearing of the Hambach forest, Armin Laschet endangered human lives for the profit of a coal company,” environmental movement Friday for Future charged on Twitter.

“Anyone in office who flouts the law in this way should no longer hold political responsibility.”