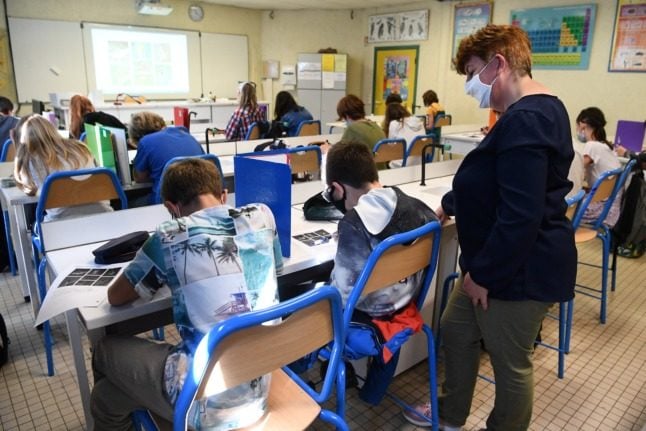 In order to understand the controversy, we first have to look at the way educators are hired at the moment.

How teachers are recruited in France

Like many other public servants in France, state school teachers benefit from a high level of job security, but on the flip side, they often have little say over where they get to work.

Most teachers have to pass a competitive concours (entrance exam), and then undertake a year-long work placement in the region of their choice. If successful, they become full-time employers of the Ministry of National Education, meaning they are guaranteed a teaching job. However, while they are able to submit geographical preferences, there is no guarantee for new teachers that they will be assigned to a school in their chosen region.

While in other countries schools advertise vacancies and teachers apply directly to the school, in France the rectorat (local education authority) is responsible for assigning teachers to schools in the area.

The schools don’t get a say and the teachers themselves don’t get to choose directly which school they work at.

Instead teachers who want to move jobs make a list of preferences.

If they want to move to a new area, they list preferences for the département (for primary schools) or académie (for secondary and high schools) they wish to work in.

If they want to change schools but stay within the same area they can then be more specific with their preferences. They can list specific schools, since the rectorat advertises available posts online, or request any school in a particular town or département.

Whether the teacher gets their first preference, however, depends on how many points they have on the barème (scale). Points are given for years of service, your family situation, the number of children you have, whether you have previously worked in a priority education zone (REP), among other factors.

Crucially, under the current system, headteachers in public schools are responsible for coordinating educational projects and providing the link between the school and parents, but they are not above ordinary teachers in the administration’s hierarchy. Nor do they have any role in recruiting teaching staff.

What Macron is proposing

In private schools, candidates apply directly to the school, and the headteacher is responsible for assembling their team. This is basically what is going to be tested out on a limited number of state schools.

During a visit to Marseille on September 2nd, President Macron laid out a €1.5 billion investment plan for the city. Buried among high-profile announcements on security and transportation, Macron unveiled plans to “make Marseille a laboratory” in terms of education.

50 schools will be chosen to test new methods from September 2022, including letting school heads choose their teaching staff. The idea is that only teachers who are fully motivated to teach in “difficult neighbourhoods” will be recruited in those areas.

“Parents tell me, at such and such place, the teachers don’t come anymore, etc. That happens, because there are people who are tired of working for too long in difficult neighbourhoods,” Macron said.

“Above all we must allow teachers to choose these neighbourhoods and the educational projects which go along with them.”

As BFM’s political analyst Matthieu Croissandeau put it, a headteacher with no control over recruitment “sometimes finds himself like a manager who doesn’t get to pick his players and sometimes has players who don’t even want to play”.

The President hopes the measure will allow those 50 schools to recruit teachers who are drawn to the challenge of helping children in underprivileged areas and are more likely to be well-adapted to the task and provide stability for the school.

The reaction from teachers

You might think that teachers would welcome having more control over where they work, but several teaching unions responded angrily to Macron’s announcement, fearing that the measure would mean all teachers – and all schools – are no longer treated equally.

“From the moment you recruit your team as you wish, you’re ensuring that education is not the same everywhere for everyone,” Pascal Pons, a teacher in the disadvantaged northern neighbourhoods of Marseille, told France Bleu, as reported by France Inter.

Teachers also resented the suggestion that the problems in Marseille’s schools were down to teachers who didn’t want to be there, rather than the government.

“It’s not motivation that Marseille’s teachers are lacking, but decent material conditions for their pupils and for themselves,” the SE-UNSA teachers’ union said in a statement.

“Marseille’s teachers have shown that they are very engaged despite very bad conditions without having been ‘chosen’ for that,” SE-UNSA’s general secretary Stéphane Crochet tweeted.

Others expressed concern over the prospect of giving headteachers power over the rest of the staff.

“What Macron is promising us is a state school system in line with private schools, where everything will be managed as in a business, but that’s not our conception of the school,” SUD Education added. “Macron and his government want by any means to impose bosses upon schools.”

Meanwhile, headteachers have been calling for more help from the state since Christine Renon, head of a school in Pantin in the Paris suburbs, committed suicide in September 2019, after denouncing her working conditions in a letter shortly before her death. And for many of them, giving them the added responsibility of recruiting teachers was not what they had in mind.

Frédéric, head teacher of a school in an REP area, told 20 Minutes the announcement “has nothing to do with concerns over the state of the building, the premises, it doesn’t solve anything.”