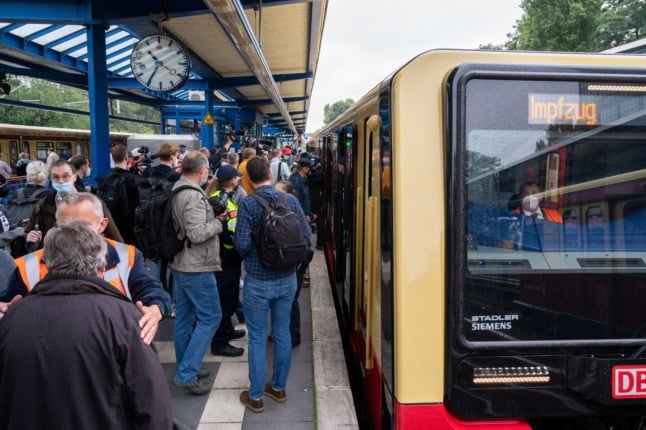 In what could be Merkel’s last speech in the Bundestag before the elections on September 26th, Merkel called on the public to get vaccinated against Covid-19.

“Vaccination works. You protect yourself and your loved ones. Vaccinating brings freedom back to us,” she said, urging people to get their jabs.

Scholz told NRW local radio last week that vaccinated people had been “the guinea pigs for those who so far have held off” in a bid to emphasise that the vaccines were safe.

“50 million have now been fully vaccinated,” he said. “We have all been the guinea pigs for those who have so far held off. So as one of those 50 million, I say – it went well. Please join in.”

On Tuesday Merkel said: “Of course, none of us were and are guinea pigs in any way when we get vaccinated. No one – neither Olaf Scholz nor me – and no one else.”

The vaccines in Germany, she said, had gone through all the necessary phases of clinical testing and all approval procedures.

In the Bundestag debate, Scholz hit back, saying that people could be convinced to get their jabs with humour.

“If some people don’t want to laugh and get worked up about it, perhaps it has something to do with the fact that they don’t have much to laugh about with a view to their poll ratings,” he said, pointing at the conservatives falling ratings in the polls.

“People are not guinea pigs in this country,” said Laschet on Saturday in Potsdam. He called on his rival to refrain from using such terms.

The latest data shows 65.9 percent of the German population has received at least one jab and 61.4 percent are fully vaccinated. Politicians and health experts are desperately trying to convince more people in Germany to get inoculated against the virus.

The so-called “bivalent: shots, approved by the European Medicines Agency earlier this month, target the BA.1, BA.4 and BA.5 Omicron variants, now responsible for the bulk of new cases since the outbreak began worldwide in early 2020.

French authorities are urging at-risk patients — including those over 60 or adults with pre-existing conditions — to get the bivalent vaccines as part of its booster campaign.

“The number of infections has again started rising in the past few days,” the HAS health authority said, noting that the BA.5 sub-variant was causing the most new cases.

The new vaccine targeting the highly contagious BA.4 and BA.5 types is made by Pfizer and BioNTech, while jabs from Pfizer/BioNTech and Moderna are for BA.1.

TRAVELLING TO FRANCE
European travellers warned they may have to self-isolate in UK
Url copied to clipboard!