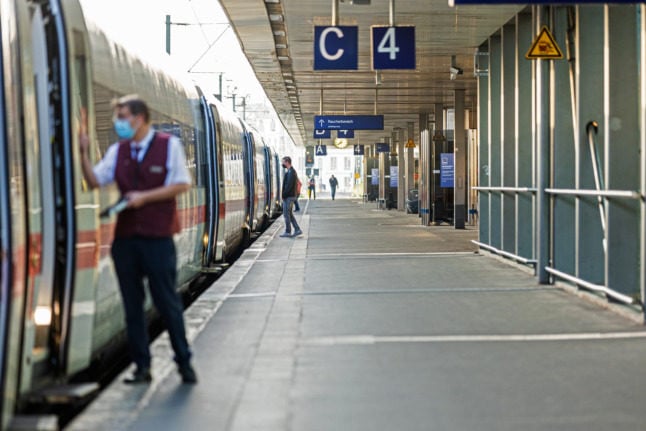 An ICE train arrives at a near-empty Hannover station on September 2nd, the day after the start of the strikes. Photo: picture alliance/dpa | Michael Matthey

Deutsche Bahn had brought the case to court on Thursday in an attempt to secure an early end to the union’s marathon strike action, which is due to run until Tuesday.

The railway company had argued that the strike was not “within the relevant legal framework”, but judges at the Labour Court in Frankfurt refused the application to delay the strikes.

While the railway company vowed to appeal against the ruling, GDL put out a statement on Friday morning to confirm the continuation of the work stoppage.

“We were aware that the hurdles in summary proceedings are very high and that the right to strike is very much protected in Germany, with good reason,” a DB spokeswoman said on Thursday evening. In the interest of the customers, she added, no stone would be left unturned to end the strike.

But after judges rejected its appeal on Friday morning, Deutsche Bahn has been out of options in its fights to postpone the strike action.

“No matter what the outcome is today, we have to try,” DB spokesman Achim Stauß also told ARD’s Morgenmagazin on Friday morning, ahead of the court judgement. “Because this strike is unspeakable, it is completely excessive – also in its length.”

The GDL leadership urgently needs to give up its blockade attitude, he added.

For the time being, however, the strike will continue.

Around 40 percent of trains in regional and suburban rail services are currently running, the company announced on Friday morning.

Due to the varying participation in the strike, the timetable varies regionally: as in the previous strikes, disruptions are expected to be greater in the eastern federal states and some metropolitan regions where union membership is higher.

For the weekend, Deutsche Bahn expects a slight increase in the timetable for long-distance services from 25 to 30 percent, and is recommending that people who need to travel this week postpone their trips to make the most of weekend morning services.

On Saturday and Sunday, long-distance trains will also run between Rostock, Berlin and Dresden. But according to Deutsche Bahn, travellers should expect long delays, cancellations and packed-out trains in the coming days.

For that reason, they say, customers should delay their journeys and consider using their ticket at a later date.

The strike is proving to be a test of patience not only for some passengers, but also for the company after its second defeat in court.

With its application for an interim injunction, Deutsche Bahn was hoping to end the latest in a wave of strikes and call off what is set to be one of the longest periods of industrial action in DB’s history.

In its months-long standoff, GDL has been calling for a 1.4-percent pay hike and a bonus of €600 for 2021, as well as a further wage rise of 1.8 percent in 2022, while Deutsche Bahn wants to bring in pay increases in stages after a wage freeze this year. Claus Weselsky, head of the German Train Drivers’ Union (GDL) wants all his demands to be met before calling off the strikes. Photo: picture alliance/dpa/dpa-Zentralbild | Sebastian Willnow

The rail operator alleged made an improved offer to GDL on Wednesday, but this was rejected by the union, who said they wanted all their demands to be met before calling off the strikes.

Claus Weselsky, the chairman of the GDL, also rejected the railway’s offer because it would not apply to all GDL members. According to him, the state-owned company is demanding that the scope of a new collective agreement be limited to driving staff, as has been the case so far.

“This makes it clear that DB wants to deprive some of the GDL members of their constitutional rights,” the trade unionist told Spiegel. This would threaten to split the union by dividing people into first- and second-class members, he said.

Since Thursday morning, there has been a nationwide strike in the passenger transport sector of the railway. The strike began on Wednesday afternoon, initially in freight transport, and is due to end after five days on Tuesday.