Almost as famous for their over-the-top outfits as their music, the group have notched up over 400 million album sales over 50 years.

Since parting ways in 1982 they have resisted all offers to work together as a foursome.

But later on Thursday, they are expected to delight fans with news on a fresh collaboration.

The now septuagenarian stars of pop classics such as Dancing Queen, The Winner Takes It All and Take a Chance on Me, said they would make a “historic” announcement at 4.45 GMT (6.45pm Stockholm time).

Details are still under wraps but the group is expected to announce their first new songs since the 1980s, as well as the launch of a new theatrical show in which they will perform as digital avatars – or Abbatars.

Last week, the group – Anni-Frid Lyngstad, 75, Agnetha Fältskog, 71, Björn Ulvaeus, 76, and Benny Andersson, 74 – announced on Twitter: “Thank you for waiting, the journey is about to begin.”

A website called AbbaVoyage.com promises a “historic livestream” and Universal Music Group, which owns the band’s back catalogue, was set to hold an event at an east London observation tower.

Carl Magnus Palm, who has written several books on the band, told AFP the group will debut at least one new song, appearing as digital avatars using hologram technology.

Abba have recorded at least two new songs, said Palm, while British newspaper The Sun reported the group has recorded a whole album’s worth in a “sensational comeback”.

The songs were created for a show set to launch in London next year, Palm said.

The Swedish pop icons announced they were returning to the studio in 2018, saying: “We all four felt that, after some 35 years, it could be fun to join forces again and go into the recording studio.”

They have mentioned five new songs, including “I Still Have Faith in You” and “Don’t Shut Me Down”.

Ulvaeus told UK paper The Times in April he wrote the lyrics and Andersson composed the music.

The group “still sounds very much Abba”, he said.

The Sun reported that the group would voice holograms of themselves in their heyday for a “state-of-the-art” show called “Abba Voyage” to be staged at a 3,000-capacity theatre in London’s Olympic Park.

The show will launch next May and run eight times a week, featuring a blend of previously filmed and projected content and live performers, the tabloid said.

The project was delayed by the pandemic and technological issues with the avatars, Palm said.

These will be more sophisticated than previously seen in shows with holograms of singers such as Whitney Houston.

Join us at 5:45pm (UK time) this Thursday for a special livestream announcement on YouTube. The journey is about to begin.https://t.co/BxY6Fk8HpN#ABBAVoyage #ABBA pic.twitter.com/MioZavGZ4J

The group has not released any new music since 1981 and broke up the following year after both of the quartet’s married couples divorced.

They steered clear of a reunion despite their music’s enduring popularity, fuelled by a hit compilation album in 1992, the Mamma Mia musical and later spin-off films starring Meryl Streep, Colin Firth and Pierce Brosnan.

“There is simply no motivation to regroup. Money is not a factor and we would like people to remember us as we were,” Ulvaeus said in a 2008 interview.

According to Celebrity Net Worth, each member of Abba is worth between $200-300 million. In 2000, they turned down a $1 billion offer to perform a 100-show world tour.

“They’re very independently wealthy so I don’t think it’s because of the money,” Palm said of their comeback.

“I think they’re genuinely excited by the possibilities of this.” 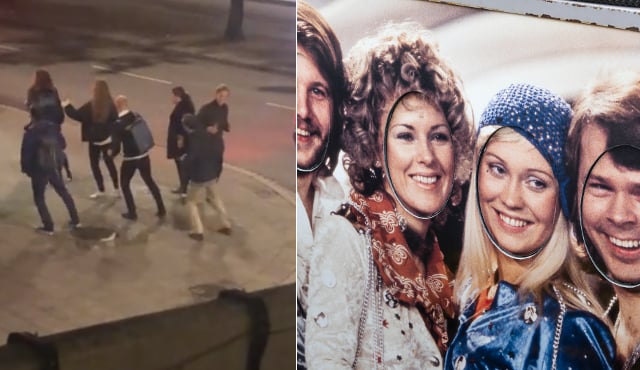 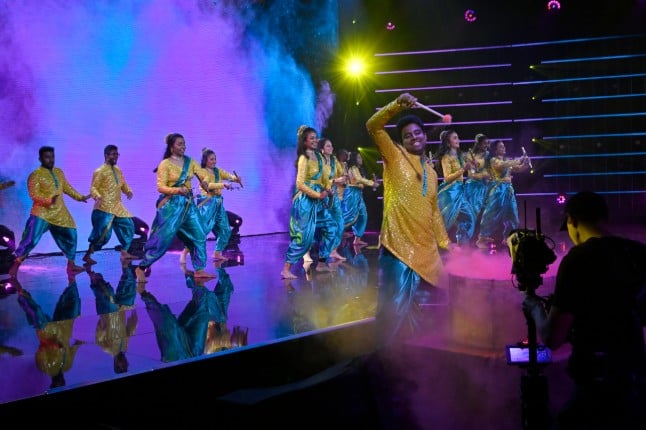 “We’ve been very passionate about dance from childhood,” says co-founder Ranjithkumar Govindan, who shortens his name to Ranjith. “I’ve been dancing from childhood, like first grade. So once we got into our professional lives and career, I wanted to continue my passion.”

“Like Ranjith, I have been dancing since the age of three, ” adds Aradhana Varma, who joined the group in 2020. She’s been competing in and winning dance competitions back in her hometown of Mumbai ever since.

With just a handful of members back in 2019, the group now numbers over 50, including dancers, videographers, choreographers, editors, and production crew, and they are still growing.

Listen to Aradhana Varna from IndiskFika on Sweden in Focus, The Local’s podcast.

Govindan says started by dancing at various events in Stockholm alongside fellow Indian dance enthusiasts before the idea came to form the troupe. “Then, one fine day, me and one of my friends, Vijay [Veeramanivanna], said ‘why don’t we do a cover song?'” he remembers.

Their initial idea was to take advantage of their location in to shoot dance routines out in Swedish nature, in the same way that Bollywood movies sometimes shoot routines against European scenes such as Swiss mountainsides or Italian plazas.

“Indians are very famous for movies, like Bollywood, so we wanted to do a cover video of a particular song from a movie which was going to be released. Since we are living in Sweden, we have plenty of opportunities to cover good locations and nature, so that was an idea,” he explains.

The name ‘IndiskFika’, (“Indian fika”, a fika being a Swedish term for a coffee break in the middle of the day) came from Govindan and Veeramanivanna’s wish to combine Swedish and Indian cultures.

“We started with five to seven people in 2019, that was the first thing we did, and we did a shoot and edited everything, then we realised that if we wanted to release it, we should have a name,” Govindan says.

“So we started thinking ‘what name should we pick for this team?’. We came up with the idea IndiskFika. Everyone knows about fika in Swedish, right?”

Their videos, some of which have over a million views, became popular both among Indians at home and among members of the Indian community in Sweden, whose interest helped the group grow further.

More and more Indians living in Stockholm started asking to join, and soon they were doing live performances:  one at the Chalmers University in Gothenburg, and another at the Diwali celebrations held by the Västerås Indian Association.

When the pandemic hit, IndiskFika didn’t let it stop them. They started planning a digital one-year anniversary for the group, and began looking for other groups to collaborate with.

When new people joined IndiskFika, it gave the group a new impetus. “That’s when the boost started,” Govindan remembers. “We became stronger and stronger. So, so many things happened.”

IndiskFika first came to the attention of ordinary Swedes with an article in Ingenjören, the members’ magazine for engineering union Sveriges Ingenjörer. Many of the group’s members are IT engineers or students at KTH, the Royal Institute of Technology in Stockholm. “They did an article about us, about the engineers continuing their passion for dance, so that reached a more Swedish audience,” Govindan says.

This led to more in-person performances, which in turn caught the eye of the producers responsible for Talang at Sweden’s broadcaster TV4.

“The Talang people said ‘we read about you and we’ve gone through all your YouTube videos, why don’t you come and participate in Talang 2022?’. The rest of the story you know. We participated in Talang, and we got a golden buzzer from David Batra in the prelims, so we went direct to the finals.”

David Batra, a Swedish comedian with an Indian father, is known for comedy series such as Kvarteret Skatan and Räkfrossa, as well as Världens sämsta indier (“World’s Worst Indian”), a series where he visits India, alongside public broadcaster SVT’s India correspondent Malin Mendel, and tries his hand at living and working in the country.

The group were among the top eight teams in the finals on March 18th, but for Indians in Sweden, reaching the final was a win in itself. They were invited for a fika with India’s ambassador to Sweden, where they were treated to both traditional Indian and Swedish treats. 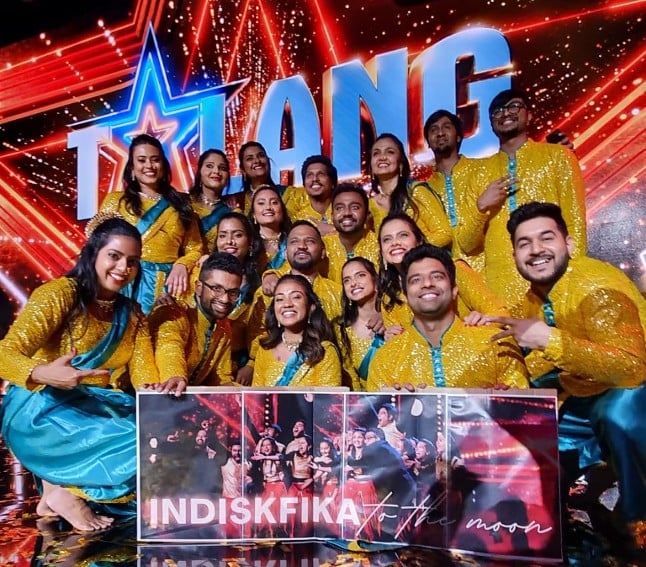 The IndiskFika troupe on stage at TV4’s studios. Photo: TV4

Many of the group’s members work full-time alongside dancing, which can be difficult at times.

“It’s not easy to be so dedicated by spending extra effort after office hours, with hectic weekend schedules for rehearsals especially when everyone in the team has a full-time job,” Varma says. “There’s a lot of things that take place in the background from logistics to costumes, hall bookings, co-ordinating everyone’s availability, social media activities and so on.”

Like many foreigners, though, Govindan and Varma have taken their time adapting to life in Sweden.

“All I knew about Sweden was that it was one of the cold and dark countries,” Varma says. “Eventually you start liking it, and you know, everything is worth it for the summers that you get here. The fika tradition, the amazing work/life balance, the nature, that’s the best part that we have here.”

“I didn’t have much of an idea about Sweden,” Govindan agrees. “The temperature, where I come from, throughout the year is between 25 to 40 degrees. In terms of temperature, nature, the people, everything is different.”

“India is very rich in culture, right?” Varma says when asked about the differences between Swedish and Indian culture. “We have a lot of colours and a lot of different flavours and you know, that’s the kind of performance we gave. That was the plan: to give a very energetic, powerful, and colourful performance.”