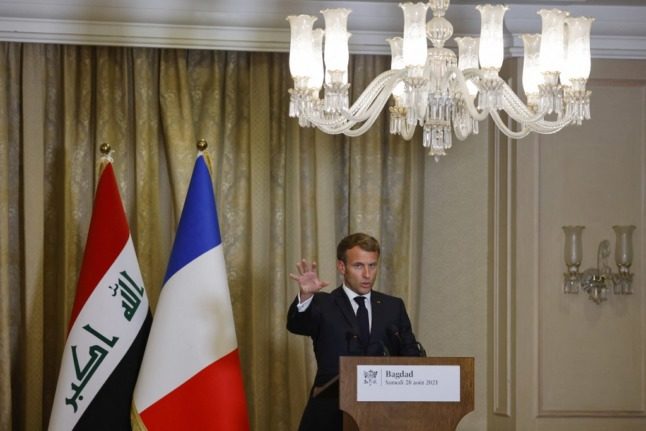 Evacuations are planned jointly with Qatar and may involve “airlift operations”, Macron said at a news conference after a summit in Baghdad.

He added that France, which ended its evacuations from Afghanistan on Friday, had evacuated 2,834 people since August 17th.

In order to continue departures, talks have been launched with the Taliban, Macron said.

He said France was counting on help from Qatar — which has good contacts with the Taliban having hosted peace talks — to organise further flights.

While in Baghdad, Macron held separate talks with Qatar’s emir on a possible role for Doha.

Further evacuations from Afghanistan, Macron said, would be “focused”, in order to pull out “men and women whom we have identified and to whom we have given temporary (residency) permits”.

He also said that the “Taliban’s respect for human rights” was a condition of any political engagement for France and its allies.

READ ALSO: UPDATE: Macron says France to stay in Iraq even if US withdraws

With France facing a hot, dry summer, some areas have already been hit by wildfires, while many others in the south of the country are on a high alert.

One of the major causes of the devastating fires is carelessly discarded cigarette butts, so the mayor of the commune of Langlade in the Gard département in south east France, has enacted a special decree banning smoking.

Smoking will be banned in a number of outdoor spaces that do not have facilities, including the town’s soccer stadium, shooting range, archery range, tennis courts – and also bans drivers from smoking in their cars. The decree is in force through the whole of the commune of Langlade.

The decree runs until July 31st and offenders risk a €15 fine – although local authorities told the Gazette de Nîmes that their main priority is raising awareness of the risk of fire from smoking, rather than handing out fines.

The Gard département has already been hit by a wildfire that destroyed several hundred acres, and firefighters have warned that the south of the country is ‘like a tinderbox’ because of the unusually early heatwave and drought that has left land parched.

READ ALSO What to do if you see a wildfire

In France smoking is banned in enclosed public spaces, but is legal in outdoor spaces such as open-air sports grounds and on the outdoor terraces of bars and cafés.

Smoking in a private vehicle is legal, as long as there are no young children in the car. Smoking while driving is not explicitly banned, but drivers can be fined if they are not in proper control of the vehicle.