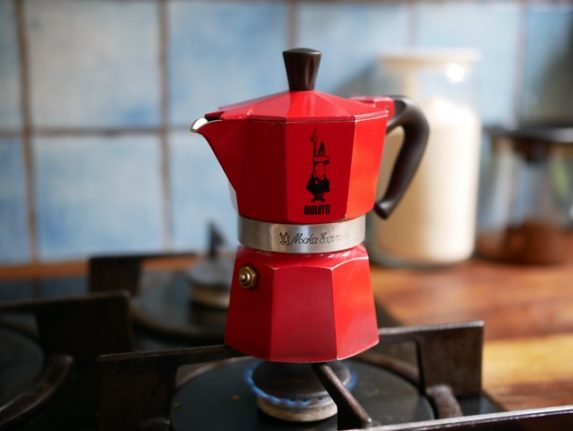 Much has changed since I moved to Verona almost exactly ten years ago. At the time, Silvio Berlusconi (remember him?) was clinging on to office while back in the UK waves of summer rioting had swept the country.

After ten years of plying my trade in Edinburgh, we spent the summer of 2011 preparing for our new life in Verona.

Between Brexit, Covid and the rise and fall of Donald J. Trump, the world has certainly moved on since then. But that time spent in Italy has also had an impact on me.

Before moving to Italy Camellia sinensis (or tea as it’s more commonly known) was my hot beverage of choice. I’d guzzle 5/6 cups of the stuff a day, with little regard for quality, preparation, or delivery.

Only occasionally would I diverge and prepare myself a brimming mug of sweet, milky instant coffee, a shameful concoction that makes me feel slightly queasy now just thinking about it.

That situation has now completely reversed. Here in Verona, I drink about three or four cups of coffee a day, and rarely touch tea.

During our first couple of years in Italy, we persevered with tea, but something just wasn’t right. At first, I thought it was the local water (which has a particularly high limescale content), so we switched to boiling mineral water. That didn’t seem to improve things. We experimented with a variety of different brands of tea bags, but the result was always a cup of disappointment. We even splashed out on luxury tea leaves from a boutique tea house, but it was no use. Within a few years of arriving in Verona, we simply gave up on tea and made the inevitable switch to coffee.

A moka for breakfast, a rich luxurious cappuccino mid-morning and then a short, strong caffè liscio [straight coffee] after lunch. Maybe another hit later in the afternoon, but never in the evening.

Italians tend only to drink tea when they’re not feeling well, and that’s become our practice too – the occasional comforting winter drink to lift the spirits and remind of home, but otherwise I’m a reluctant convert to Italy’s proud coffee culture. How did you ever get by without a mid-morning visit to the coffee bar? Photo: Andreas SOLARO/AFP

I eat like an Italian (and find my old habits revolting)

You could fill a book with Italian eating habits, conventions and customs. Indeed, there are blogs and twitter feeds devoted to the subject. At first, many of these rules and practices seem fussy and smack even of a certain snobbish intolerance. Afterall, what could possibly be wrong with throwing a slice of pineapple on a pizza or adding a splash of cream to carbonara?

On closer inspection, however, and having observed them at close quarters for nearly ten years now, there is an undeniable logic to Italian eating habits. For a start, Italians eat breakfast, lunch and dinner with admirable punctuality (one of the few things they do with such precision).

Breakfast is generally sweet – a brioche or biscuits. More used to a savoury start to the day, I found the typical continental-style breakfast a tad indulgent, but have long since given up on finding a fry-up in Verona. With some reluctance, I have now embraced coffee and brioche as the only way to start the day in Italy.

Lunch is normally where I’ll take my pasta hit. These dishes tend to vary according to the season. A hearty pasta e fagioli in the winter, maybe a risotto agli asparagi in the spring and a simple salad in the summer.

Dinner is always later than we are used to, and we still occasionally find ourselves waiting patiently outside our local pizzeria in the early evening only to realise that the ovens never fire up before eight. Whenever we go back to the UK, the earlier teatime always takes a little readjusting to! One guaranteed side-effect of life in Italy is that you’ll become far more exacting about what qualifies as ‘good’ pizza. Photo: Nik Ownes/Unsplash

Indeed, compared to the lifestyle in which you can eat (and drink) anything, anytime, anywhere, Italians are far more prudent. They know more about their digestive systems and are prepared to share more than I ever thought was polite to mention! For this reason, they rarely eat pasta in the evening, preferring something low carb, like fish, meat or simply vegetables.

The production of a bowl of fresh fruit is a well-worn ritual at dinner tables across the country, so peeled fruit is another one of the numerous adjustments I’ve made to my eating habits over the last ten years.

Ten years ago, I’d eat pasta as a side dish, maybe alongside a baked potato or even a quiche! Washed down with a cup of tea. And a Mars Bar. Looking back, I find such behaviour repulsive. I think that probably means, in my eating habits at least, I’ve been Italianized!

I know the difference between the second and third conditional

Italians, as anyone who has ever taught English or taken an Italian lesson over here will tell you, are sticklers for punctuation. The education system over here places a much greater emphasis on grammar than on the practical application of the language. Partly as a consequence of this approach, Italians are often regarded amongst the worst at speaking English in Europe.

To be fair, as a struggling linguist myself, I was also pretty hopeless when I arrived in Italy ten years ago. With no teaching experience, I was thrown in at the deep end and now shudder at the thought of some of my early English lessons.

As a student, I didn’t fare much better and I struggled for months, even years, with the basics of Italian grammar. Now, at the risk of blowing my own trumpet, I’m regularly complemented on the fluency of my Italian (though, on reflection, this generally only happens after I’ve had a couple of drinks), and I can now rattle off the key features of the third conditional without giving it a second thought.

While I wouldn’t say that I’m a stickler for punctuation, these past ten years have given me a deeper understanding of the structures behind the languages that we speak, a real empathy with anyone struggling to learn a new language, and a fierce determination to continue to improve. For me the struggle continues!

I’m now a (self) published author

Well, you couldn’t come to a city like Verona and not be inspired. Shakespeare, Catullus, Dante and Goethe, giants of the literary world, have all been inspired by the ancient city. More recently Tim Parks has emerged as one of the most eloquent voices reflecting on the contemporary Italian experience.

Something about the climate, the architecture, the lifestyle and, of course, the sun-drenched piazzas just inspires creativity. People at the statue of Dante in Verona’s Piazza dei Signori. Photo: AFP

After years of pontificating, last year I published my first book, Notes from Verona, a short collection of diary entries from inside the locked-down city. Earlier this year I followed that up with my second book, Rita’s War, an account of the life of a young Jewish partisan who was killed in the hills above the city.

With another couple of works in progress, ten years into my Italian adventure, I’m finally getting around to delivering on my long-held literary ambitions.

This last one is a bit of a guilty pleasure. As a middle-aged father of two, I shouldn’t really be into Italian pop/rap music, but in recent years I’ve really succumbed to the insistent beat and playful lyrics of the Italian summer hit.

When I first came to Italy, I tended to look down at contemporary Italian music, dismissing it as cheesy, superficial and trite. Now, inspired by my kids, I lap it up, enjoying Italian pop music for what it is, the essential soundtrack of a carefree Italian summer.

Also great for picking up a few contemporary Italian phrases, these are the songs that boom out from campsites, beach bars, sagras and car radios. Here are a few of my favourites from the past couple of years to get you started:

Richard Hough has lived in Verona since September 2011 and writes about the region’s history, football, wine and culture. His new book, Rita’s War, a true story of persecution, resistance and heroism from wartime Italy, is available here. He is currently writing his next book about wartime Verona.