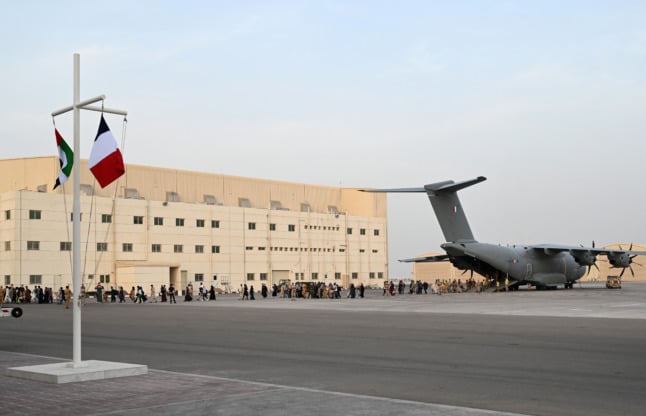 People disembark at a French military air base near Abu Dhabi, after being evacuated from Kabul. Photo: BERTRAND GUAY / AFP.

France is seeking to evacuate more than 1,000 Afghans who are fleeing the country following the Taliban’s lightning takeover a week ago, one of a number of nations scrambling to pull out vulnerable individuals.

“We are concerned about the deadline set by the United States on August 31st. Additional time is needed to complete ongoing operations,” Le Drian told reporters at the UAE’s Al-Dhafra air base, where France has set up an air bridge for people evacuated from Kabul.

France had “sheltered” nearly 1,200 people leaving Afghanistan between August 17th and 22nd, including approximately 100 French nationals and 1,000 vulnerable Afghans, as well as dozens of other nationalities, the French delegation said.

“We still need to increase our coordination locally, with the United States and with our partners present on site,” he said.

Defence Minister Florence Parly said Paris had a pre-approved plan to protect its citizens and Afghans who had worked alongside France.

“We started planning airlift operations before the fall of Kabul,” she said.

Le Drian and Parly were due to meet diplomats, military personnel, police officers, and “all the staff working under extremely difficult conditions to enable evacuation operations from Kabul” an official French statement said.

They were also due to meet Abu Dhabi’s Crown Prince Mohammed bin Zayed Al Nahyan, de facto leader of the UAE, to “thank the Emirati authorities for their support”, the statement added.

US President Joe Biden has set an August 31st deadline for the chaotic airlift organised by thousands of temporarily deployed US troops — but has left the door open to an extension if needed.

Since August 14th, roughly 25,100 people have been evacuated from Afghanistan aboard aircraft flown by the US and its allies, according to a White House estimate.

Britain said on Monday it would urge the United States at a virtual G7 summit to extend an end-of-the-month deadline to complete evacuations of Western citizens and Afghan colleagues from Kabul.

Germany also said it was in talks with both NATO allies and the Taliban about keeping Kabul airport open beyond August 31st.

But a spokesman for the Taliban, Suhail Shaheen, told Sky News that the hardline Islamist group would not agree to any extension of the deadline, calling this a “red line”, with any delay viewed as “extending occupation”.

Nearly 200 Afghans arrived in Abu Dhabi late Monday aboard a French military transport aircraft from Kabul, many still shocked by their ordeal and some with only a small backpack of possessions.

“Physically, I’m fine. But mentally I’m really sick. The world has to help us, especially us women,” Shukriya, who works for a Swedish NGO, told AFP.

He highlighted the confusion in Kabul and difficulties in carrying out the evacuations, with thousands of Afghans clamouring for admission to the airport.

“They spend hours and hours in the sun, in the dust,” Martinon said of people who arrive with the proper paperwork to be evacuated to France.

Sometimes those forced to wait outside are targeted with rubber bullets, the ambassador said.

“But once they get through it, everything goes really fast,” he added of the evacuation process.