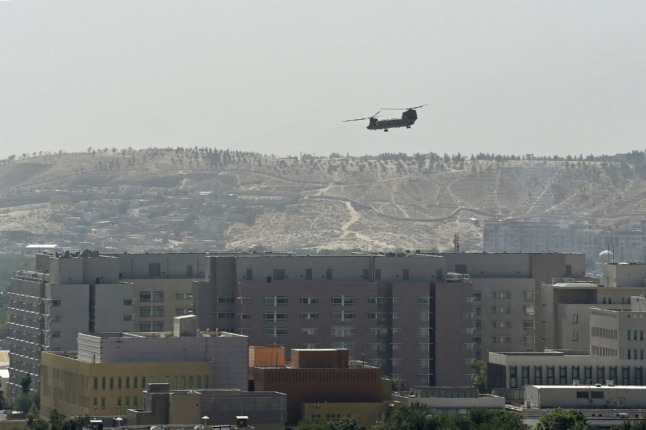 US helicopters over the American Embassy in Kabul. Photo: Wakil Kohsar/AFP

“We are planning to carry out the first rotation between now and the end of this Monday,” Parly said on France Info radio, adding there were several dozens of French citizens to be evacuated along “with people under our protection.”

“We have organised at the base we have in the United Arab Emirates the capabilities to receive the first evacuees,” Parly said.

These are for French nationals who remain in Kabul but also “people under our protection and who we are going to evacuate”, Parly said.

The French base in the UAE “will serve as a military hub to ensure the back and forth between Abu Dhabi and Kabul and then repatriation to France”, Parly added.

Diplomatic personnel are included among the dozens of people set to be evacuated, she added.

The priority is to “evacuate (Afghan) personnel who rendered eminent service to our country by helping us daily, and also doing the maximum to
provide protection to figures who defended the rights, human rights, journalists, artists, all those who stood for these values that we continue to defend around the world,” she said.

The military operation dubbed Apagan involves two French air force transport planes, a C-130 and A400M, which left France late on Sunday and early on Monday for the Emirates.

President Emmanuel Macron has convened a meeting of the country’s Defence Council and will address the nation on Monday evening.