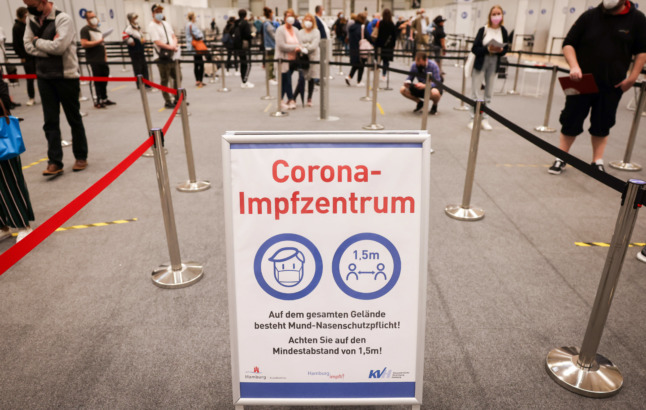 According to the German public health authority, huge discrepancies have emerged between official numbers recorded on the government’s vaccination dashboard (impfdashboard.de) and recent research carried out by the RKI-run Covid monitoring body, Covimo.

RKI claims that significant differences were recorded in the young and middle-aged adults between the ages of 18 and 59, suggesting that the German Health Ministry has been underestimating the pace of its vaccination drive.

What do official figures say?

The government relies on reports from vaccination centres, hospitals, mobile vaccination teams,  company physicians and local GPs to figure out how many vaccine doses have been administered in total.

These sources of information are then collated into figures that are published on the government’s digital dashboard.

According to this source of information, 56.1  percent of people in Germany were fully inoculated against Covid as of Thursday. Meanwhile, 62.8 percent had received at least one jab.

Official figures suggest that the campaign has been limping along over the past eight weeks or so, with most of the jabs delivered into people’s arms being second doses of vaccine – rather than first jabs. This means that while the number of fully inoculated people has been steadily rising, the number of people who’ve had their first jab has remained relatively stable.

On Wednesday, the DPA reported that only 70,000 first doses of Covid vaccine had been given out the previous day – seemingly confirming fears that an ever-declining number of people are choosing in favour of vaccination.

What does the Robert Koch Institute say?

According to its report, the vaccination coverage in Germany is likely to be “considerably higher” than government figures suggest.

Covimo, the monitoring wing of RKI, has been surveying the population every 3-4 weeks to carry out its own research into the matter – with heartening results. In each of the surveys carried out since January, Covimo contacted 1,000 people over the age of 18 to ask them whether they had been vaccinated.

The surveys suggested that, rather than the 59 percent recorded at the time, 79 percent of 18-59 year olds had been given a dose of Covid vaccine. The RKI believes that the real figure for first vaccinations would be somewhere in between these two.

Asked for their opinions on vaccination, 91.6 percent of people surveyed said they were in favour of it. “Willingness to be vaccinated against Covid is at a high level,” RKI reported.

On full courses of vaccination, however, Covimo’s figures were roughly the same as those on the government dashboard.

How could this have happened?

There are numerous factors that come into play here. One is the use of the Johnson & Johnson vaccine, which, unlike other type of Covid vaccine, only requires one dose for effective immunity.

According to RKI, in government figures, most clinicians tended to report these exclusively as a second dose – rather than including them in the ‘first dose’ figures. Some local doctors may be under-reporting their vaccinations to the health authorities due to limited resources and time. Photo: picture alliance/dpa | Boris Roessler

Additionally – and perhaps more significantly – is the fact that only around half of physicians registered on the reporting system have actually reported figures to the government. “This could be an indication that vaccination rates are being underreported,” said the RKI.

There are also factors that may have biased the Covimo surveys – such as the fact that people who see vaccination positively may have been more willing to participate.

Since the surveys were carried out in German, they would also have excluded people without the language skills to participate.

What does this mean for the Covid situation?

If the RKI is right, experts believe Germany could be in for a slightly easier autumn than anticipated – and potentially a less ferocious fourth wave.

“Vaccination is the decisive factor in the success of the pandemic,” Gernot Marx, President of the German Interdisciplinary Association for Intensive Care and Emergency Medicine (DIVI), told the Funke Media Group.

“If the vaccination rate in the 18- to 59-year-old group is actually much higher than reported, we would have a much more relaxed situation, especially with a view to the autumn.”

But immunologist Carsten Watzl urged caution. “We may be underestimating the number of people vaccinated for the first time, but we’re talking about a few percentage points,” he told DPA on Wednesday. Relatively small surveys of the population are not a sufficient basis for making broad claims about the vaccination campaign, he added.

However, Marx believes the RKI data should be scrutinised as a quickly as possible through independent national polling in order to see how large the discrepancy actually is.

“Reliable data is the basis upon which people accept Covid measures,” he said.

The government recently announced that by the end of summer, areas with a 7-day Covid incidence of 35 or more infections per 100,000 people would have to introduce a ‘health pass’ system.

This would mean that unvaccinated people would have to get negative tests in order to visit the majority of public indoor spaces, while vaccinated and recovered people can simply show their digital or paper pass.

The plans – which are intended to deliver a shot in the arm of the lagging vaccination campaign – also include the scrapping of free rapid tests. From October 11th, these will be paid for out of residents’ own pockets, and could cost anywhere between €15 and €50 per test.

What are the latest Covid figures in Germany right now?

Covid infections are continuing to climb daily in Germany. On Thursday, the 7-day incidence of Covid infections per 100,000 people stood at 27.6, up from 25.1 the previous day.

However, the number of Covid-related deaths has fallen slightly. While at the same time last week, 24 deaths were recorded in Germany within a day, this figure had dropped to 17 on Wednesday.

Since the start of the pandemic, German authorities have reported 3,805,063 cases of Covid to the RKI – though the actual number is believed to be considerably higher.

As of Thursday, 91,834 residents of Germany had died after contracting Covid-19.

People who’ve had J&J, sometimes known as Janssen, used to have full vaccination status after a single dose of the vaccine.

Since January 15th, however, a single dose of J&J should no longer count as full vaccination, according to the Paul Ehrlich Institute (PEI), the country’s vaccine authority.

In autumn last year the German government began recommending a second mRNA jab for people who’d had J&J – which many people thought was the booster vaccination.

However, according to the PEI’s update on proof of vaccination within the Covid Protective Measures Exemption Ordinance and the Coronavirus Entry Ordinance, the second shot is needed to complete ‘basic immunisation’.

It is unclear at this stage if it means that people returning or coming to Germany from abroad with only one shot of J&J will be counted as partially vaccinated and therefore need to present tests or face other forms of barriers to entry.

We are also looking into what this means for the various health pass rules in states, such as the 3G rules for transport.

The Deutsches Ärzteblatt, a German-language medical magazine, said: “Special rules according to which one dose was recognised as a complete vaccination with the Johnson & Johnson vaccine are no longer applicable.”

The Local has contacted the German Health Ministry for clarification on what this means for those affected.

According to the latest government figures, 5.3 million doses of Johnson & Johnson have been given out in Germany so far in the vaccination campaign.

The news will come as a shock to those who don’t know that they need another jab, or haven’t got round to getting their second vaccine yet.

All other jabs – such as BioNTech/Pfizer, Moderna and AstraZeneca – already require two jabs.

People in Germany are seen as fully vaccinated two weeks after their second dose.

As The Local Germany has been reporting, the German government said in December that people who’ve had J&J need a third shot three months after their second dose to be considered boosted.

“Therefore, after completion of the basic immunisation as recommended by STIKO, i.e. after administration of two vaccine doses (preferably 1x J&J + 1x mRNA), following the current recommendation of the STIKO, a further booster vaccination can subsequently be administered with a minimum interval of a further three months, as with the other approved Covid-19 vaccines,” the Health Ministry spokesman said.

However, there has been much confusion on this front because some states have been accepting J&J and another shot as being boosted, while others haven’t.

It is unclear if the new regulation will mean that states will all have to only accept J&J and two shots as being boosted.

North Rhine-Westphalia, for instance, updated its regulations on January 16th and now requires that people who’ve had J&J and one shot have another jab to be boosted.

Having a booster shot in Germany means that you do not have to take a Covid-19 test if you’re entering a venue, such as a restaurant or cafe, under the 2G-plus rules.

The Paul Ehrlich Institute said that proof of complete vaccination protection against Covid takes into account “the current state of medical science”.