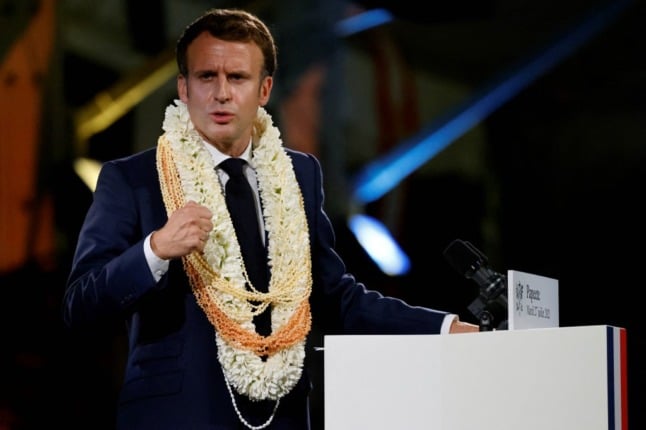 Yes, street protests against the “health pass” persist and grow. Yes, they are continuing in the month of August, traditionally a political no-go-zone.

No, they should not be dismissed, even though three-quarters of the protesters are the usual anti-Macrons and anti-everythings.

READ ALSO Protests over the health passport will continue, but this is not a new ‘yellow vest’ moment Demonstrations are ongoing, with more planned for Saturday. Photo by Alain JOCARD / AFP

Let us recall, however, why Macron felt obliged to swallow his words and ask parliament to extend the health pass to restaurants, bars, cafés and long-distance trains and buses almost one month ago.

When he made the announcement on July 12th, the French vaccination programme was flagging. After a slow start and a booming spring and early-summer, first-vaccinations had slumped to less than 170,000 a day.

The fourth “Delta” wave of Covid-19 threatened to cut a swathe through the unvaxxed part of the French population.

The real reason for imposing the health pass was not to “segregate” the vaccinated from the unvaccinated for health reasons. The real reason was not to slow the spread of the Delta variant by making restaurants and bars off-limits to the vax-shy, vax-lazy or vax-resistant.

The health-pass was imposed to re-boot the French vaccine programme. The intention was to jog, force or coerce people to get vaccinated –  to make vaccination not exactly compulsory but essential if you wanted to lead a normal life.

EXPLAINED When and where you need a health passport in France

Let’s leave aside for a moment the political, moral or philosophical arguments against this decision.

In terms of its intended consequences, the health-pass has been an enormous success. Long before it took effect on Monday French people had flocked to vaccination centres or pharmacies or doctors’ surgeries.

Since Macron’s TV address which announced the extension of the pass on July 12th, over 9 million people – 9,345,380 as of Tuesday night – had received first injections against Covid-19. This is an average of 322,275  a day, almost double the rate before Macron spoke.

The daily rate of first doses has slumped again in the last week but is still averaging 280,000 a day. France, as of last night, had first-vaxxed 45,289,566 people over the age of 12  – around 78 percent of adolescents and adults. If you exclude the 12 to 17 year olds, the first-vax rate for French adults is now almost 81 percent.

At the present rate of progress, France will overtake the UK total of first vaccinations in about one week’s time.

Lol, it's happening. They're gonna do it. Absolute jokers. https://t.co/IFHpxVi9SI pic.twitter.com/AuhM7lYHxH

The population of the two countries is almost identical at about 67 million.

The UK has given first doses to 47,091,889 people but that is now increasing at a rate of only 32,500 a day. The French total is rising by nine times that daily rate – and  is forecast to increase again from next Monday by  Doctolib, the medical booking site.

I got in trouble with British vaccine nationalists when I first pointed a couple of weeks ago that the French first-vax total was on course to overtake the UK by mid-August. In fact, several other EU countries have since already overtaken Britain in terms of jabs-per-thousand people.

My intention is not to denigrate the UK vax programme which was wonderful in its early months. Britain is still reaping the benefits of having vaccinated so many people so quickly, even if the daily first dose rate has now slowed to a trickle with around one third of British 18-29’s still unvaccinated.

(The French total, it is true, also includes 12 to 17 year olds. But why have adolescents been left unprotected in the UK for so long?)

My reason for making the comparison with the UK are twofold. First to counter the exaggerated attacks on the French and EU vax roll-outs in the UK media earlier this year. Secondly, to demonstrate the “success” of the French health pass.

The Delta wave is now upon us. The number of cases may already have crested. But acute cases and deaths are still rising sharply. Over 80 percent of the more than 1,500 people now in acute care are unvaccinated.

Two maps published in recent days are worth considering side-by-side. The first (on the left, with the highest incidence rates in purple) by independent website Covidtracker, shows the current incidence rate for the Delta wave, département by département. The second (on the right with the lowest vaccination rates in red), based on a  study for the French health insurance system, shows where the rates of  vaccination in France are highest and lowest. The match between high-incidence and low-vaccinaton  – all along the Mediterranean coast, in the poorer Paris and Lyon suburbs, in parts of the south west  and a few islands elsewhere – is not exact but it is striking.

Whatever the Saturday marchers may say, vaccination works

Macron made a politically dangerous decision to revive the French vax programme. He may or may not pay a political price for that decision in the presidential elections next April.

He may also benefit. Over 60 percent of French people tell pollsters that they approve of the health pass.

France could reach, on present trends,  90 percent or so of first vaccinated adults by mid-September. If the Delta wave has passed by then, Macron could abandon the health pass (always meant to be short-lived) and announce that it has been a huge success.

What can be stated confidently is that the health pass – and therefore Macron – have already saved many hundreds of French lives.