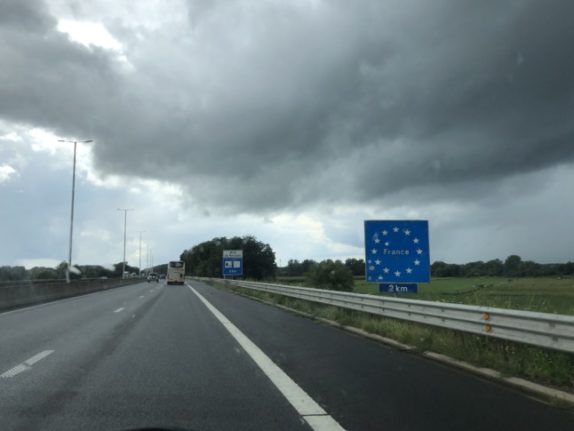 The border to France approaches, after over 20 hours of driving. Photo: Chiara Milford

One of the most beautiful things about Europe is its lack of hard borders. They’re even more porous when you travel by car, and the only sign that you’re in another country is the differing road quality and a sudden change of language.

My partner and I leave Stockholm on a Thursday afternoon full of sweat and stress to find a place for everything we need for a month in 3.68 square metres of van. I’ve filled the glove-compartment with masks, hand sanitiser and all our travel documents: a passport each, identity cards just in case, and a passport for the dog too. There’s a cupboard full of Oatly, something that’s not so common in southern Europe.

We set off with two big fears: 1) that the car, a 2004 Volkswagen Transporter, will break down, and 2) that we’ll be denied entry to a country because of pandemic restrictions. This makes every border crossing a victory deserving of a whoop, a high five, and little dance of joy.

We’ve been preparing for this for over a year. He wants to surf proper Atlantic waves, and I’m just happy to see parts of southern Europe that aren’t the cities.

During the pandemic my partner spent all his free time (and a considerable chunk of his work-time, but don’t tell anyone) almost single-handedly converting a greasy hunk of metal into something capable of housing two adults and a dog for a month.

After over a year of sawing, sanding, moaning, gluing, and crying, she was ready.

Neither of us had left the country in over a year. The last trip we took across borders was to pick up my belongings in Copenhagen before I moved to Sweden officially in June 2020.

On the way back from that trip, laden with plants and a bicycle and more boxes of books than I thought possible, we broke down in a nowhere-place in Småland (called Markaryd, but we don’t utter the name without touching wood superstitiously). The repairs took a week and cost over 16,000 kronor.

The van (we call her Berryl because she’s Berry-red) had broken down a couple of other times since, but with the right engine oil and a lot of YouTube tutorials and prayers, she seemed to be trundling down the E4 with the speed and grace of German engineering.

Sweden is a long, long country. I tire quicker than I thought I would, considering I’m not the one driving. The dog takes up more space than he should in such a tiny front carriage; he splays out of the middle seat, spilling onto the handbrake and my lap. We’re going faster than the little blue triangle on the GPS can keep up with, but we still won’t get to the bottom of the country much before 2am.

When we reach Denmark, we’re met with one of the hardest borders in Europe. The toll to cross the bridge (yep, that bridge) is high (€64 high) and before we make it onto Sjælland we encounter the Danish border police. They want our passports: my partner’s is Australian with a Swedish permanent residency card, I’m a Finnish citizen and former Danish resident, the dog is Swedish. This should all be fine. But they want a negative PCR test.

We’ve both had our first shot of the Pfizer vaccine and have that on an EU Digital Covid certificate, but we’ve forgotten to get ourselves a negative PCR test. We know one shot isn’t enough to guarantee that we’ll be Covid-safe, but we figured that staying in a van is pretty much as low a risk as you can pose to anyone else during a pandemic. 2020 vs. 2021. Not pictured: a year of hard labour, two breakdowns, and countless trips to hardware stores. Photos: Michael Parker and Chiara Milford

This time, the border agent ushers us through. But we immediately head for a hyper-efficient walk-in testing centre in Taastrup. Eight to 18 hours later we find out that we’re negative.

By that time we’ve crossed into Germany, who don’t care as much about who drives into the country. There were queues of cars coming into Denmark, but none leaving. And just like that, beer becomes affordable again.

Whenever I travel around western Europe, which has almost always been by train until now, I think about how this journey would have been impossible 80 years ago. How these seemingly arbitrary borders were fought for and negotiated with blood. And now we just drive past little starry signs that say The Netherlands and Belgium and France, with not a border agent or customs desk in sight.

We drive in and out of torrential rain, which at one point starts leaking through the passenger door onto my arm and the sleeping dog. It could be worse, we keep saying, stuck in seemingly endless traffic around Hamburg.

The Netherlands and Belgium go past in a flash of cows and fries and my terrible French. The only thing strange is that it feels strange to have to wear a mask inside service stations. We wonder why this hasn’t been the norm in Sweden too – it’s such an easy thing to do.

Brexit and the pandemic mean that there are far fewer British tourists than you’d usually expect.

When we get to the French border, we’re the only car with an ‘S’ for Sweden on our numberplate. We’ve come far, and I’m very proud.

The weather improves the second we cross the border into France but that’s surely just coincidence. The tolls start just as the rain stops but we don’t mind because we’ve made it. The author at work outside home for the next month or so. Photo: Michael Parker

We made it 2,085 kilometres away from home to a small campsite in north western France, where I’m currently writing this. It’s not our end destination, not by a long way, but it’s somewhere we didn’t think we would be this time last week.

The aim is Galicia, the western-most point of mainland Spain.

But let’s see how far the pandemic and the van let us go.

“The decision means that as of November 1, 2022 only children in certain vulnerable groups are recommended to get and thereby offered vaccinations against Covid-19,” the agency said.

“Overall we see that the need for care as a result of Covid-19 has been low among children and young people… and has in addition subsided since the Omicron variant started spreading,” Sören Andersson, head of the Public Health Agency’s vaccination department, said in the statement.

The country made global headlines when it refused to implement draconian measures as other countries around the world went into lockdown.

Sweden saw a slight increase in the number of deaths during the summer, but the number is now falling.

After having a high death toll at the beginning of the pandemic, the Nordic country now has fewer deaths per capita than the European average.