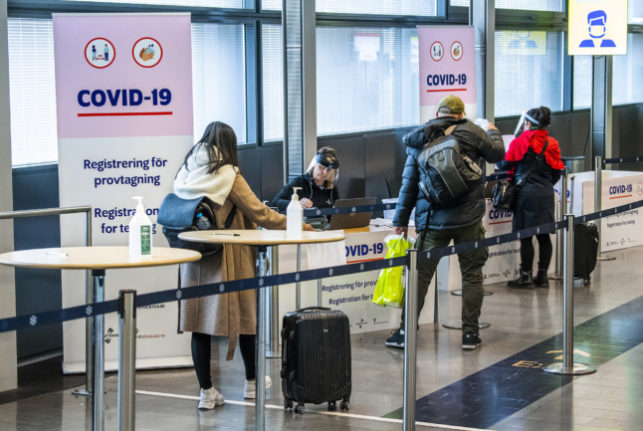 Testing is recommended when unvaccinated people return from travelling outside of the Nordic region. Photo: Claudio Bresciani/TT

There were 3,451 confirmed new cases of Covid-19 in Sweden last week, up 30 percent on the week before. The 14-day incidence rate stood at 59 cases per 100,000 people, which the Public Health Agency noted “means that the spread of infection is no longer at low levels”.

The proportion of confirmed Covid-19 cases that could be linked to international travel was around 17 percent last week. The spread of infection has continued to increase in parts of Europe and in several other countries, as well as in Sweden.

“We see a lot of cases with people who have been infected abroad in popular travel destinations in Europe and we want to remind you to get tested when you come home to Sweden. We have also received reports of crowding at several holiday resorts in Sweden, including on Gotland, but also at dance venues in Stockholm,” said Anders Tegnell, the state epidemiologist, in a press release.

“This is not good, the pandemic is still ongoing and we must continue to follow the recommendations to keep our distance,” he said.

Of confirmed cases last week, 76 percent were under 40 years of age.

The Public Health Agency advised anyone who is not fully vaccinated and has travelled outside the Nordic countries to be tested even without symptoms. There were 74,647 tests carried out this week, up from previous weeks.

In neighbouring Denmark, there were 6,212 positive cases in the past week, according to Our World in Data on August 5th.

There were six new intensive care patients with confirmed Covid-19, which is at approximately the same level as in recent weeks, despite the large increase in cases.

COVID-19 STATS
Why Europe could be headed for pandemic ‘endgame’
Url copied to clipboard!