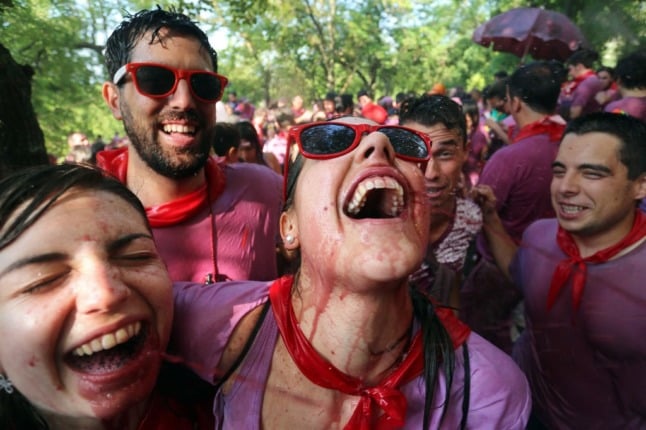 There are many different ways to say that someone is drunk in Spanish. Photo: Cesar Manso/AFP

One of the first words you learnt in Spanish may have been borracho/a (drunk), not necessarily because you’re inclined to a tipple or two, it’s just a word that comes up often in conversation together with beber (to drink), cerveza (beer), vino (wine) and resaca (hangover).

But if you want to take your boozy Spanish vernacular to the next level and learn some expressions that will get you a few laughs and impress the locals, buckle up and bottoms up because you’re in for a treat. ¡Salud!

This is the most common colloquial way of referring to a drunken episode in Spain.

Pedo, apart from being the noun for fart in Spanish, is also the word for a bender, so if someone shouts ¡menudo pedo!, they’re not necessarily paying tribute to the wind they’ve just passed.

Equally important in these cases is to not mistake the verbs you use, as tirarse un pedo or echarse un pedo (to throw) is the correct way of referring to actually farting.

If it’s a monumental bender and you want to emphasize that, you can swap pedo for pedal.

Remember not to drive if you’re going to get drunk.

Here’s an expression which has its exact English equivalent: blind drunk. It seems that loss of sight due to severe inebriation knows of no linguistic barriers. It’s worth noting however that in Spain you can also get blind with food or anything else you consume in excess.

I’ve passed the exam so tonight I’m going to get blind drunk on margaritas.

It’s an oldie which refers to Spanish psychedelic flamenco duo Las Grecas, who had the smash hit in the 70s “Te estoy amando locamente” (I’m loving you madly).

The gipsy sisters were famed for having some pretty wild parties, so the expression can also be used to refer to someone under the influence of drugs.

How many have they had? They’re wasted!

Although castaña is usually used to refer to a chestnut, in old Spanish it also meant a recipient used to store liquids, and in modern colloquial Spanish a castaña can also mean a knock or blow.

I got sloshed last night. What a hangover!

Ir cocido – To be boiled

No secret to this one, you’ve got enough alcohol running through your bloodstream to be boiled over the kitchen hob like a beer-infused bratwurst.

Juan is bladdered, he’s drunk half a bottle of rum. Ir piripi – To be tipsy

This one’s is hard to find a literal translation for as the word derives from a term that no longer exists – piripitulia, an alcoholic drink. We initially thought it referred to a trumpet sound as that’s the kind of silly thing that people who are getting increasingly drunk would do.

There’s also the verb pimplar, which means to drink excessively.

Are you already tipsy? You’ve not even drunk half a beer yet!

Estar mamado – To be sucked or breastfed

If there’s dribble oozing from your mouth from all the alcohol you’ve had, this is a suitable expression to use in Spanish.

I couldn’t care less about that drunkard! He’s sloshed! Estar morado – To be purple or bruised

As purple as the grapes that you’ve just consumed in fermented format, or as bruised as the grapes that were pressed to death for your enjoyment. Either way, here’s another colourful way of referring to someone who is pretty leathered.

We’ve had four bottles of wine so we’re pretty bladdered.

Estar (borracho) como una cuba – As drunk as a barrel

Apart from the name of the Caribbean country famed for its rum, cuba is also the word for a wine barrel or another recipient used to store liquids, usually alcoholic ones. Therefore, if your behaviour is resembling that of a booze-packed barrel rolling down a hill, this Spanish expression is appropriate. Nowadays cogorza is only used to refer to a drunken episode but in 15th century Spanish cogorça was a funeral banquet where it was already customary to drown one’s sorrows.

He’s absolutely plastered. He can’t even stand up.

Borracho como una almeja – As drunk as a clam

British English has the expression as drunk as a skunk (perhaps because of the alliteration), but this expression in Spanish perhaps makes a bit more sense as it compares the tanked person in question to a mollusc that is constantly imbued in liquid.

You can’t remember anything? Well, you were as drunk as a skunk. Here’s how Spanish people refer to sleeping in after getting trollied the night before.

Pintar la mona, which in its literal sense means to paint the monkey, is also an expression Spaniards use to say they’re wasting time or procrastinating.

It’s not 100 percent clear what the origins of this bizarre expression is but it’s more likely that it has something to do with a card game than with bringing a monkey home for a nap or some finger painting.

Tomorrow is Sunday so I’m going to sleep the bender off to my heart’s content.