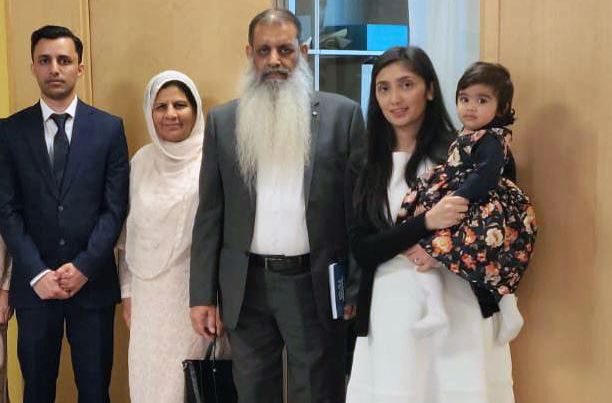 The last time Zeeshan Afzal (far left) saw his parents was at his PhD defence in February 2020. Photo: Private

“My parents have visited me every single year for the past seven years except the last one,” says Zeeshan Afzal, 30. His parents live in Pakistan.

Since the pandemic, not a single day has gone by without Zeeshan video-calling them on WhatsApp.

They usually come to visit his two-and-a-half-year-old daughter, Dua, their only grandchild, in summertime, to avoid the heat back home and enjoy the Swedish summer.

“Now we can’t have that normal summer because half my family is not here,” he says. “We’re incomplete without our parents.”

From early summer, travellers from within the EU and certain low-infection countries outside the EU have been able to come to Sweden for any reason, as long as they can provide a negative Covid-19 test (or proof of vaccination if travelling from an EU/EEA country).

“If even tourists can be in Sweden, why can’t my parents be here?” Zeeshan says.

“They pose no risk, they’re vaccinated, they will come with a negative test and quarantine in my home.”

His parents, like those of the other readers in this article, are all fully vaccinated. But that isn’t enough to enter Sweden.

Sweden has banned travel from countries outside the EU/EEA since March 2020 due to the pandemic. There are several exemptions, including for EU residents and citizens, travel from countries with low levels of infection, as well as people with “family ties” in Sweden or “urgent family reasons”.

But according to the Swedish rules, visiting your adult child doesn’t count as an urgent family reason. And being a parent of an adult child who lives in Sweden isn’t a “family tie”. The exemption only applies to parents or grandparents of adult children if they rely on them for financial support. They can also visit for the birth of a child, but not post-birth visits.

A spokesperson for the Justice Department told The Local: “The Swedish regulation reflects that it is especially important that certain parents of young children, despite the pandemic, can enter the country to visit their children here. It is the responsibility of the enforcing authorities (primarily the Swedish Police Authority) to determine in each individual case how the exemptions are to be interpreted and which decisions are to be made.” Chris Voyal (far left) used to visit his family three times a year, but he hasn’t seen them since Christmas 2019. Photo: Private

He’s been missing home so much recently that he finds himself looking at where he used to work in Uxbridge on Google Maps.

He moved to Stockholm nine years ago for love. This is the first time he’s started to feel really isolated. “Your family’s family-life is going on and you’re looking in from the outside, peering over the fence.”

When asked what they miss most about being with their parents, people didn’t name anything in particular. It’s more the comforting feeling of having them around.

“That feeling of being in the same room as someone, it’s not the same as talking over a screen,” Chris says.

Laura Morley, 41, agrees. “It’s their physical presence, just being part of your life.”

Her parents have never been to see her in Sweden. She moved to Gothenburg from Manchester, UK, with her three children after her husband got a new position with AstraZeneca last year.

“Over the last year we’ve always been looking forward to our family visiting, and it’s not happened. It’s just been pushed back and pushed back.”

Laura’s 68-year-old father has had to change his flights four times.

“My dad is on the police website every day seeing if anything changes with the rules,” she says. Laura Morley and her family moved to Gothenburg last year. They love Sweden, but miss the rest of their family. Photo: Private

Sweden isn’t the only country with restrictions in place, and for many people, travelling back home to see their families just isn’t possible.

“There’s nowhere we could could quarantine for 10 days with three kids,” Laura says, “for us to go back, we just can’t”.

One of the most frustrating things for people is that the pandemic doesn’t have an end date.

“We just want to show them around where we live, so they can understand why we love it here so much,” says Laura.

For Zeeshan, he wants his daughter to get the chance to be with her grandparents again.

“For us who have half our family outside the EU, it’s extra tough,” he says. But for all his frustration, he thinks it’s been much harder for his parents and his daughter.

Remarkably, despite all the setbacks, no one has given up on their parents coming to visit them soon.

“My dad will be in floods of tears,” says Laura. “But then it’ll be like normal; within a few hours we’ll be making tea.”